Our bodies produce a very potent antioxidant called glutathione.  Glutathione is a complex of three different amino acids that come together in a unique way to support normal cellular detoxification and protect our cells from stressful chemical reactions. Problems can occur when our glutathione production cannot keep up with the demand for detoxification or genetically, as is the case with some individuals on the autism-spectrum, we cannot produce normal levels to begin with.

Conditions that have been successfully treated with glutathione therapy include Alzheimer’s, Parkinson’s Disease, multiple sclerosis, autism, heavy metal toxicity, hepatitis C, cirrhosis, pulmonary disorders, cancer and atherosclerosis.  Given the nature of glutathione as potent antioxidant and detoxifier, I see it also having a role in other chronic degenerative disorders such as chronic fatigue, fibromyalgia and irritable bowel syndrome.

Glutathione is a major player when it comes to detoxification reactions. Toxins are one of the major challenges we all face living in modern society. We are constantly exposed to smog and other pollutants in the air. In fact, Southern California is a large depository for aerosolized mercury coming from China. China produces a large amount of mercury emission through their coal burning industry that travels the Gulf Stream and accumulates along the western half of the United States. Mercury is a highly toxic metal with implications for neurological damage.  Mercury toxicity can also exacerbate conditions such as heart disease, cancer, Alzheimer’s Disease, Parkinson’s and even childhood disorders such as autism and attention-deficit disorder. 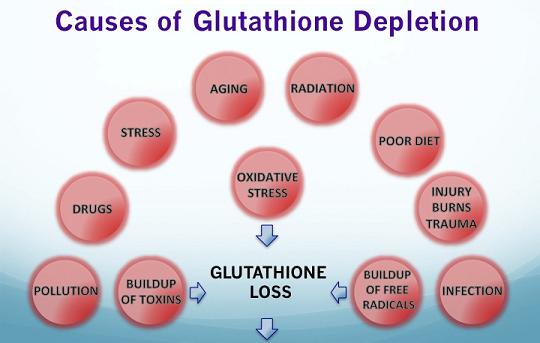 We are also exposed to various toxins in our food and water supply – everything from arsenic, lead, aluminum and other chemicals from herbicides and pesticides that leach into our water supply and are consumed directly or travel up the food chain.  We are exposed to toxins from everyday household items such as plastics, Teflon and chemicals in cleaning supplies. These metal and chemical toxins can put a tremendous strain on our bodies’ detoxification system and contribute to the development of chronic disease.

Dr. Kurt Woeller, who is a specialist in biomedical therapies for autism, has noted that in autistic patients glutathione reserves are commonly low. This leads to an inability of many autistic-children to detoxify when exposed to mercury, lead and other heavy metals and toxins.  These heavy metals and toxins tend to build up and have a damaging effect on the nervous system. These toxins are known to adversely affect bio-chemicals in the body that support attention, focus and general awareness. Many autistic individuals have benefited from glutathione therapy.

Dr. Perlmutter, a well-known neurologist in Florida, with a specialty in treating people with Parkinson’s Disease, has seen tremendous success in using glutathione therapy. Because glutathione has a positive effect on dopamine in the brain, Parkinson’s patients experience great improvement in their symptoms. Dopamine is the brain chemical most affected in individuals with Parkinson’s.

Glutathione is available through supplementation. It comes as oral capsules or as a liquid suspension. The capsule forms are not very effective, as most of the glutathione is destroyed in the intestinal tract and blood levels do not get high enough to have much of a clinical effect. The oral liquid forms are better than capsules, but limited studies exist to really show an increase in cell levels of glutathione.  This is particularly pertinent when treating conditions such as Parkinson’s. There is also a transdermal form of glutathione available by prescription. This cream is applied one to two times daily and has shown some benefit for children on the autism-spectrum who do not like the sulfur smell and taste of the liquid form.

The most effective route of glutathione therapy, however, is through an intravenous infusion. Although not practical for some children, this route of administration has the greatest benefits, particularly for adults and those with neurological disorders such as Parkinson’s Disease, Alzheimer’s, multiple sclerosis and older children, teenagers and adults on the autism-spectrum who can handle and I.V.

With an I.V. you can obtain higher blood levels, which promotes higher intracellular concentration.  This method also increases glutathione levels in the brain and nervous system, which are very important in treating neurological disorders.  The infusion is very simple and quick. The process takes about 3 to 4 minutes and can be done one to three times per week depending on the severity of the condition.

Protection against toxicity is one of the best ways to promote health and longevity and the use of glutathione therapy is a great way provide this critical antioxidant.