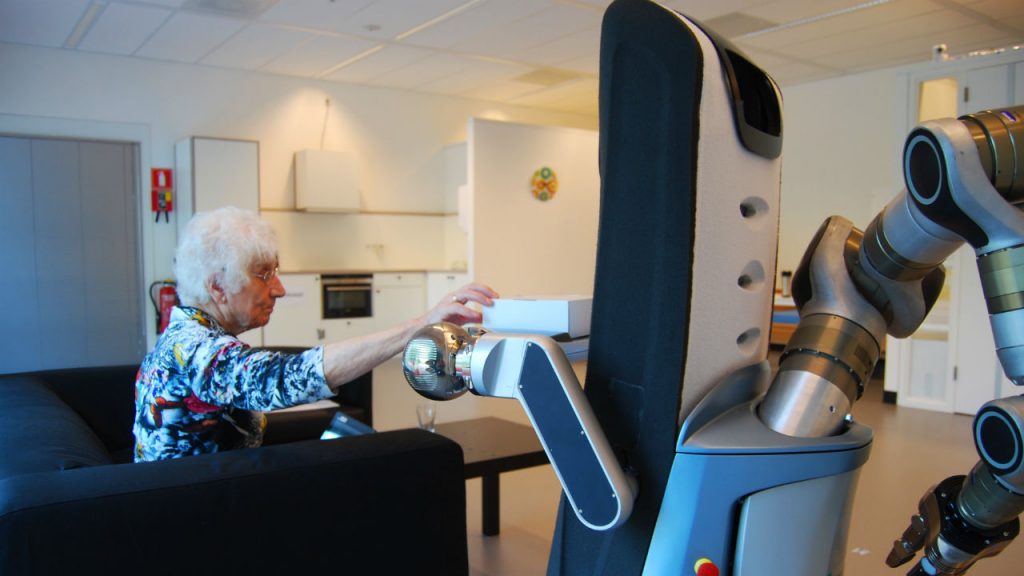 Today, robots and artificial intelligence are emerging as a more common and realistic option for many industries. Whether it’s automatic chat bots that respond to you on the behalf of customer service, or a virtual assistant that helps you order products online with a quick voice command, AI has officially made its way into the mainstream.

Now, scientists believe that they may have created a robot that could help to take over some of the more repetitive tasks involved with looking after the disabled, elderly, and those suffering from problems like Dementia. If these robots are effective, they could give human carers more opportunities to focus on the personalised aspects of elderly care.

The latest robot developed, called “Stevie” is designed to look like a human, with arms, and a head. The idea was to create a piece of technology that could fit seamlessly with the care home environment.

The Stevie AI can perform some tasks automatically, like reminding a user to take medication, or do something important, while other tasks require some human interaction. For instance, if a smart floor or room sensor detects that a user in a bedroom or bathroom might have fallen over, then a human operator can take over the robot, and use it to check in on the event.

Stevie is also a great way to keep elderly individuals connected. The head features screens that allow people to make Skype calls, which could eliminate some of the problems that today’s elderly individuals face when it comes to using smartphones. What’s more, the robot can regulate everything from light levels, to temperature throughout a home.

The arrival of new robotic assistants won’t mean that we no longer need human carers in the home and nursing environment. Stevie can’t dress or wash people, but he can make looking after those in need a more efficient process. While we might be able to eventually create care robots that help with more physical tasks, for now, we need the care and attention of human professionals too.

Of course, it’s worth noting that robots like Stevie can provide benefits to carers, as well as disabled and elderly users. After all, care assistants often deal with a very high amount of demand, and Stevie could take pressure off their shoulders, and some of the work off their plate. While not everyone in the care environment would need the help of an AI solution to thrive, the delivery of new smart technology could make life a lot easier for many people who need some extra support.

There are already some clever options on the marketplace for elderly and disabled individuals who want to tap into the benefits of technology. For instance, you can use a smart hub to ask someone to call for help if necessary, or a smartphone to track vital signs. However, this technology is somewhat limited from a user perspective. After all, it’s hard for someone with hearing problems to use a device like the Amazon Echo for support. At the same time, if someone suffers from a fall, they might not be able to press the button that sends out an emergency call on their device.

The AI robot Stevie overcomes many common problems with technology because it communicates with users in a range of ways. Not only can the machine talk, but it can also show facial expressions, display text, gesture, and more. The manufacturers behind Stevie hope that they’ll be able to bring the robot into the market within the next two years. Until then, they have a lot of work to do making sure that the system meets with major regulations.