BPH is a condition known as benign prostatic hyperplasia/hypertrophy or more commonly referred to as the enlarged prostate. The prostate is a gland slightly larger than a peanut surrounding the urethra and sitting at the base of the bladder, in front of the rectum. As men age, non-cancerous nodules develop due to the abnormal dividing of cells. Natural aging, testosterone, diet and environments all may play a role in the abnormal growth of the gland. 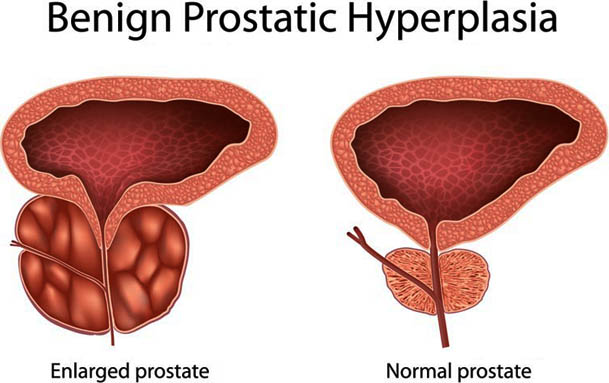 The progressive enlargement of the prostate increases with age. The abnormal changes can begin as early as 30; symptoms usually do not develop until after 50-plus years of age. Prostate examinations have found that 70 percent of men at the age of 60 and 90 percent of men by age 80 are affected by BPH. It is believed that all men will develop an enlarged prostate if they live long enough.

Role of Hormones and Testosterone

Research has shown that daily consumption of animal meat triples the risk for prostate enlargement, daily consumption of milk doubles the risk, and lack of vegetable quadruple the risk of developing prostate cancer. As the Western diet spreads to other countries, we are seeing an increase in BPH in those nationalities such as Asian and African who are normally immune to the disease.

Environmental factors which include toxins such as pesticides, food additives which contain compounds that increase the production of DHT and the lack of zinc (important mineral in metabolizing hormones) in our soil all contribute to increasing the chance of developing prostate enlargement.

To decrease the possibility of developing an enlarged prostate, men should eat a diet rich in fiber including organic fruits and vegetables, limit the intake of meat to fish and poultry, take herbal supplements and  be checked by a Fertility Plus doctor once a year after the age of 40
Define Prostate

The prostate is a male gland that is involved with urination and reproduction. According to The Prostate Centre, the prostate is an exocrine gland that secretes fluid through the duct into the urethra. Once in the urethra, the fluid is carried outside of the body through the penis. The fluids that are made by the prostate are part of semen, or the fluid that carries sperm during orgasm. The fluid and the semen are stored in seminal vesicles and released during male climax. The prostate also produces protein called prostate specific antigen, or PSA, that is ejaculated with semen, and traces of PSA are also in the bloodstream. The prostate additionally controls the flow of urine.

According to the University of Pittsburgh, the prostate contains five zones. The largest zone is the peripheral zone and contains about 75% of the prostate’s glands. Prostate cancer and chronic prostatitis usually occur in this zone and most needle biopsies, used to determine cancer, are done here as well. The transition zone surrounds the urethra and benign prostatic hyperplasia, or BPH, is found in this area. The anterior zone occupies one-third of the prostate and consists of smooth muscle. The central zone has the remaining glands of the prostate, and the last zone consists of preprostatic tissue that prevents semen from returning back into the bladder.

Prostatitis is a prostate infection and a symptom is when the prostate swells or enlarges. It can occur at any age. BPH occurs in men that are middle age and older and is also known as lower urinary tract symptoms, or LUTS. It is a common condition caused by non-cancerous enlargement of the prostate gland, states the American Urological Association. Tumors can also enlarge your prostate, states NCI. Prostate cancer can threaten your health and your life, according to PSA Rising. Urinary difficulties may occur as early as your 30s and 40s. However, most men do not have problems until later in life.

Your prostate normally gets larger as you age, states NCI. You have a higher risk for prostate cancer if you have a family history, are black, or are an older man, according to Mercer University. If you have difficulty urinating, seek medical attention. If you cannot urinate at all, go directly to the emergency room as you may suffer from BPH. Yearly physical examinations and PSA tests are highly recommended to ensure you do not have cancer,

nikesh.sharma22 is author at LeraBlog. The author's views are entirely their own and may not reflect the views and opinions of LeraBlog staff.