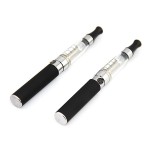 Even to those without the benefit of years and years of indoctrinated medical knowledge, smoking is widely recognized as being exceedingly dangerous to one's health. Each year, cigarettes rank as the most deadly of all readily available consumer products - an unflattering distinction it holds by a very wide margin.

Since the emergence of e-cigarettes, there has been no shortage of detractors (detractors who may or may not have a vested interest in the tobacco industry) claiming from atop lofty soapboxes that e-cigarettes are no safer than conventional cigarettes; some have even gone so far as to say that they are much worse.

The fact is (if one can parse through the myriad of vaping myths), many smokers are simply wary of transitioning away from smoking, largely because there has never been any long-term data capable of identifying the effects vaping can have over the course of a lifetime. Admittedly, that's not an unreasonable position to take on the subject. These days however, it's getting more difficult to hold onto that opinion.

An independent study published by Public Health England concluded in 2015 that not only are e-cigarettes much, much safer (up to 95% safer) than conventional tobacco products, they found that they can significantly improve a smoker's odds of successfully quitting smoking. The study went on to conclude that e-cigarettes are in no way correlated to the incidence of smoking in the country's youth, stating that e-cigs are in fact playing a substantive role in the dwindling smoking rates in young adults.

Shockingly, in spite of the hard evidence put forth by studies like those generated by PHE, there is a rising trend in the number of people who believe that e-cigarettes are just as dangerous as cigarettes. That said, it's not really about the science, nor is it about a lack of evidence. Instead, these beliefs stem from the propagation of misinformation.

Why E-cigarettes Are Far Less Dangerous

So why are cigarettes so dangerous and e-cigarettes so harmless by comparison? Breaking it down to the brass tax, it's all about combustion. E-cigarettes use a heating coil to evaporate the e-liquid, creating a vapor. Conventional cigarettes on the other hand burn the tobacco, which releases harmful toxins and carcinogens into the body.

Perhaps the danger of e-cigarettes is perceived because they emit vapor, which consequently, looks a lot like cigarette smoke. To the uninformed, if it looks like smoke, it probably is. That failure to distinguish vapor from smoke can arguably be blamed for the erroneous conclusions the public is drawing regarding the safety of e-cigarettes.

Additionally, there is also a misconception that second hand vapor is harmful to those that breathe it in. While certain e-liquids contain nicotine, exhaled vapor contains only minute, trace amounts. Furthermore, e-juice vapor does not contain any of the tobacco-specific chemicals that make cigarettes so dangerous. Nicotine in and of itself does not pose a significant health risk; in fact, the chemical can be found (in trace amounts) in many products that people consume on a daily basis, including certain vegetables and teas.

The Technology Itself is Dangerous (It's Not)

People fear what they struggle to understand, and that includes technology. When it comes to e-cigarettes, there's a common belief that the batteries that power them are volatile, and can explode at any given time. Like any complex, mass-produced device, there is a chance that an e-cigarette's battery will malfunction. To have one that explodes however is exceedingly rare-so rare in fact that the odds that an exploding battery could injure a vaper are astronomical (about 1 in 13 million).

For those interested in quitting smoking, there is emerging data that seems to suggest that those who incorporate the use of a vaping device (in conjunction with local stop smoking initiatives) are among those that have the highest success rate when it comes to dropping the habit. That's because e-cigarette are an easy-to-use and efficient nicotine delivery system.

As time goes by the amount of evidence in favour of e-cigarettes will continue to grow-the struggle will come from sifting the facts, from the fiction. Hopefully, as the amount of scientific data grows, so too will the public's confidence in this revolutionary product.