If you have ever had a migraine, you will know how debilitating it can be. In the United States, an estimated 30 million people suffer from these throbbing headaches, which are often accompanied by nausea, vomiting, and hypersensitivity to light.

In the UK, approximately 15 out of 100 people experience a migraine attack a month, at least. Until very recently, the only treatments available for migraines were a number of drugs, including over-the-counter medications and prescription pain relievers. However, virtually each of these drugs, including common over-the-counter medications such as ibuprofen, produce mild or severe side effects. There is increasing evidence that marijuana can safely and effectively relieve migraine symptoms without adverse side effects.

WHAT ARE MIGRAINES AND WHAT ARE THEIR CAUSES?

Migraine sufferers experience headaches, which can sometimes be debilitatingly painful. Headache is accompanied by increased sensitivity to light and sound, along with nausea and vomiting. Migraines can also cause disorientation and coordination problems. In the most severe, but rare cases, migraine attacks can also cause temporary paralysis or loss of consciousness. Symptoms usually last for several hours, but in some cases, they can last for days. Migraines can often severely affect the quality of life for those who have them.

Despite being a very common ailment, science knows surprisingly little about the exact causes of migraines. Currently, the common assumption is that they are caused by a series of physiological and environmental triggers.

What is known is that migraines probably occur somewhere in the brain stem and nervous system, which interacts with the trigeminal nerve – the largest cranial nerve, responsible for controlling pain sensation, motor control, and pain signals in the face. Migraine triggers potentially activate neurons in the trigeminal nerve, thereby affecting the dilation of cerebral blood vessels; and this, in turn, activates pain and inflammation receptors. Some medical experts believe that migraines could stem from an imbalance in serotonin levels., which is a chemical in the body that has a role in the transmission of pain. On the other hand, it is possible that some people have a greater genetic predisposition to suffer this discomfort than others.

HOW DOES CANNABIS WORK IN THE BODY?

And this is where marijuana comes in; this plant contains phytocannabinoids, like THC and CBD, which also bind to (or influence) our body’s receptors, in the same way as endocannabinoids. This suggests that cannabis compounds influence the way the SEC regulates physiological functions, including pain control. Next, we will analyze the research that delves into the topic of cannabis and migraines. 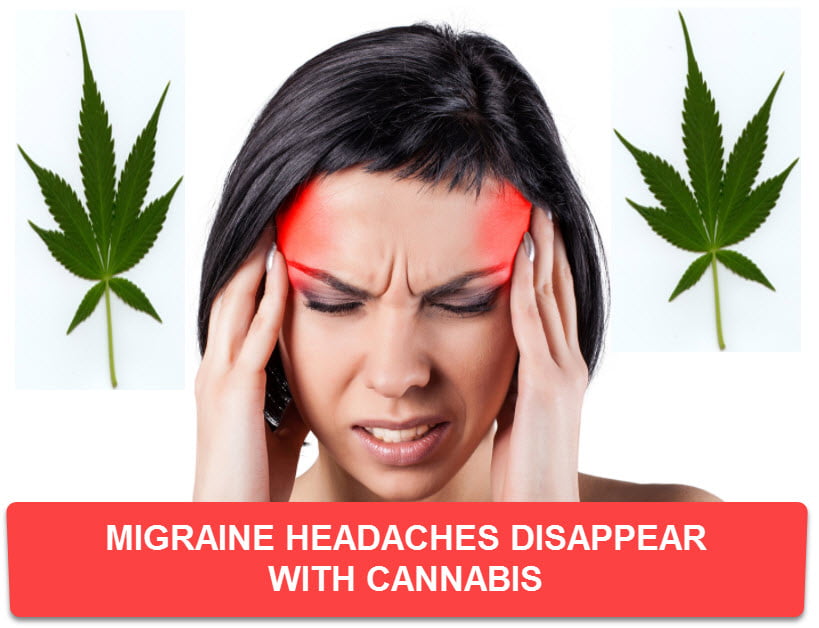 STUDIES ON THE EFFECTIVENESS OF CANNABIS FOR MIGRAINES

The field of research on the consumption of medicinal cannabis is still very recent. However, as laws become more flexible around cannabis use for therapeutic purposes, we begin to see a substantial increase in studies. Studies show that medicinal cannabis has overall positive effects, including how it can possibly help with migraines.

A retrospective analysis of the effects of cannabis among people affected by migraines was published in 2016. The researchers looked at 121 adults with the primary diagnosis of migraine headache, who had been recommended by their doctors for migraine drugs or medical marijuana.

The researchers’ results suggested that medical cannabis had been able to significantly decrease the number of migraine attacks per month, from 10.4 to 4.6. However, they recognized that more study is needed to analyze the exact cause and effect relationship between migraines and medical cannabis. They also suggested researching different strains, formulations, and doses of marijuana to better understand its effects in preventing and treating migraines.

In another study published at the “European Academy of Neurology Congress” in 2017, Italian researchers also defended the use of medicinal cannabis as a viable possibility for the future of migraine treatment and prevention.

Examining a group of 48 people with chronic migraines, the researchers administered varying doses of a solution that contained THC and CBD, the two main active cannabinoids in cannabis. They found that with an oral dose of 200mg, acute migraine pain had decreased by 55%, a result similar to the study mentioned above. On average, patients experienced a 40% reduction in their monthly migraine attacks and a 43% reduction in pain intensity. In addition to the decreased frequency of migraine, many patients also mentioned other beneficial effects, such as reduced muscle pain and stomach aches.

Dronabinol is a synthetic form of THC that hit the market in the early 1980s under the brand names Marinol and Syndros. It is a prescription drug, legal in the USA. and other countries, which was initially prescribed to treat the symptoms of AIDS, but was also prescribed for other conditions with chronic pain, such as multiple sclerosis.

Considered one of the first legal cannabinoid drugs, dronabinol has not turned out to be the miracle cure many expected.

Some patients say that dronabinol does not work for them, or they find it too intense and do not like not being able to control the side effects, such as the high caused by THC. Orlando marijuana doctors have noticed that many patients also say that taking dronabinol causes nausea, dizziness, and drowsiness. In addition to the long list of unwanted side effects, dronabinol has another downside that is more significant for migraine sufferers: it can take up to 2 hours to take effect. Considering that migraines sometimes appear suddenly, having to wait a few hours to feel relief is a major drawback. On the other hand, the fact that dronabinol often makes nausea worse makes it especially troublesome for patients. And finally, this drug has a high price. Research says that migraine headaches appeared shortly after abrupt discontinuation of long‐term marijuana use.

Compared to the questionable efficacy and side effects of dronabinol, and other specific migraine drugs, vaporizing (or even smoking) might be a better option. Vaping marijuana not only helps with a headache but can also alleviate nausea and other migraine-related symptoms. Furthermore, the relaxing effect of cannabis is beneficial, as stress is also believed to play a role in the onset of migraines.

WHAT CANNABIS STRAINS CAN RELIEF MIGRAINES AND HEADACHES?

Today, marijuana users for medicinal purposes, and actually recreational use as well, can choose from many different varieties of cannabis. These strains not only vary in taste and morphology but have different concentrations of cannabinoids and terpenes. Here is a list of marijuana strains that could help you with migraine symptoms.

The Sour Diesel is one of the best-known strains, not only for its unique flavor that delights many lovers of cannabis. Hailing from sunny California, this Sativa-dominant hybrid produces incredibly powerful, aromatic smoke, blending its signature hints of fuel with acidic, herbal flavors. With 19% THC, it produces powerful body smoking, great for calming headaches, and relieving stress.

The White Widow, which is named for its beautiful white coat of bright trichomes, is one of the most legendary marijuana strains in the world. This balanced hybrid (50% sativa, 50% indica) is considered by many people to be one of the best and most consistent strains, both for growing and for smoking. It produces a phenomenally powerful, almost psychedelic, stone with a cerebral effect; but it’s also incredibly relaxing. It has a crisp, fresh flavor, with hints of pine and citrus undertones. With 19% THC,  White Widow can be a good option to calm a migraine as soon as it starts to feel.

The OG Kush is a classic variety, which is still the favorite of many consumers of cannabis. Its most unconditional fans love this strain for its intense smoke, with the typical OG delicacy and a light citrus touch. But what they love most about this 75% concentration is its immense power. It produces an incredibly relaxing effect on body and mind. Thanks to this, this classic variety from the American West Coast is also a favorite among consumers of medicinal use, who want to eradicate the physiological symptoms of migraines.

The Green Crack Punch is a very special variety. It is a very powerful and relaxing Indica, resulting from the mix between Green Crack, a strain known for its motivating and energetic effect, and Purple Punch, a very potent strain by itself. The combination of these strains gives an extraordinary effect. You will feel motivated and full of energy, while the grass relaxes your body from head to toe. With its powerful effect (contains up to 20% THC), this 60% Indica is an ideal choice for medicinal consumers who want a flexible strain to be dosed throughout the day.

The popular Chocolate Haze is an almost pure Sativa (95%), ideal for those suffering from arthritis, muscle pain, stress, and migraines. Its effect is extremely powerful, although pleasantly stimulating and cerebral. Its cheerful and lively high makes it a good option for those who want to improve their mood. The  Chocolate Haze will spoil you with its distinctive chocolate flavor, sweet and earthy touches.