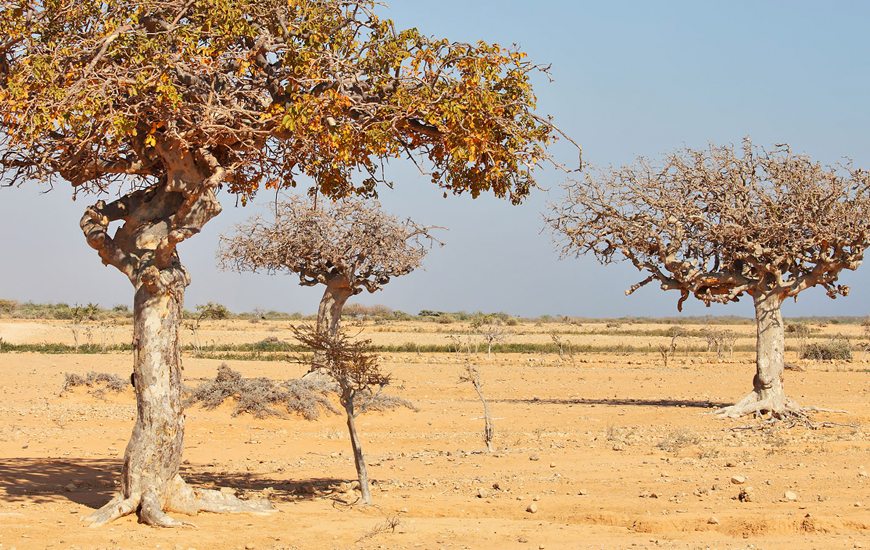 Derived from the Myrrh tree, which grows in the desert and is native to Egypt, Myrrh Essential Oil is popularly used in Africa and in the Middle East. The name Myrrh is derived from the Arabic word meaning “bitter,” due to its sometimes-bitter aroma. The harsh environmental elements that are characteristic of the Myrrh tree’s natural setting are believed to be responsible for causing the trunk to develop in a particularly knotted form.

The tree exudes a glossy and waxy sap that is clear or pale-yellow in color and this is the substance known as Myrrh Gum, although it is referred to by many other names, such as Bol, Hirabol, Merra and, more simply, Gum. The sap is released through the tree’s knots when the bark is cut. As these “tear-like” drops dry and harden on the trunk of the tree, they clump together into the size of walnuts and darken in color to a shade that is reddish-brown.

Once the sap hardens completely and becomes stiff and grainy, it is referred to as “resin.” This can be clear or it can have a tinge of yellow. As the resin ages, white streaks typically begin to appear. After the resin is collected, it undergoes a processing method, such as Solvent Extraction or Steam Distillation, to produce a “resinoid” or an essential oil. Often with a thick viscosity, Myrrh Oil ranges in color from yellow to dark brown and exudes an aroma that can be described as musky, warm, dry, woody, smoky, and somewhat herbaceous. When the oil is described as having a “bitter” aroma, that is usually because it smells strong and pungent with balsamic notes. 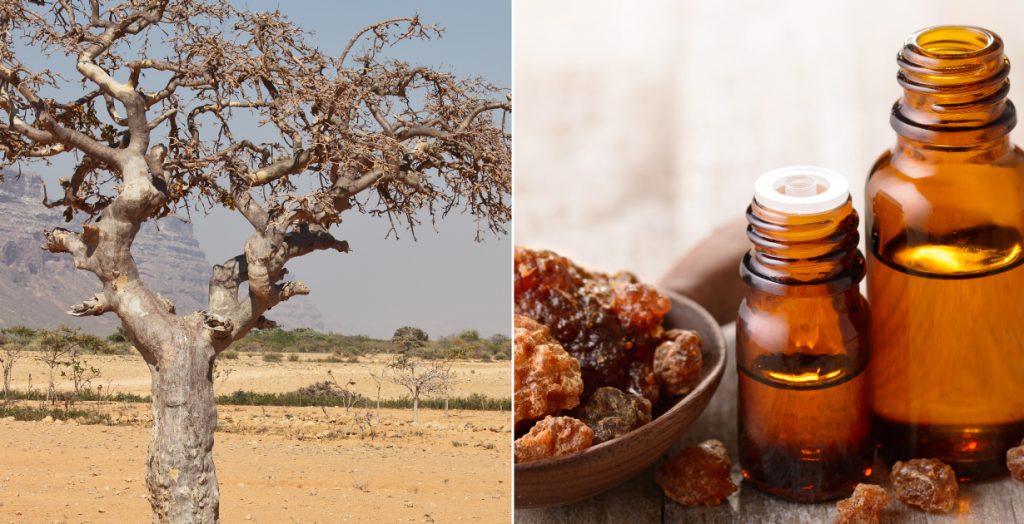 Traditionally, Myrrh resin was used as incense that was burned over hot coals, and its warm, sweet, woody fragrance, which was thought to have an enigmatic yet heartening quality, was believed to be favorable for conducting religious and spiritual sacraments, such as meditation and prayer. During these rites and ceremonies, Myrrh was often used to inspire and enhance a spiritual and emotional connection while encouraging a deeper mystical understanding; hence, it was often used during embalming and purification practices as well as in funeral rites.

Reputed to stimulate the mind, boost energy, and enhance concentration, Myrrh Oil continues to be used to stimulate spiritual awakening with its sedative and grounding properties. When diffused in aromatherapy practices, Myrrh Oil is beneficial for promoting relaxation and for balancing negative emotions. This makes it ideal for addressing mood swings, such as those caused by hormonal imbalances.

In cosmetic applications, Myrrh Oil helps support skin health by soothing itchiness, diminishing the appearance of blemishes, and addressing uncomfortable symptoms of skin conditions, such as eczema. Its astringent quality helps minimize the look of enlarged pores, thus promoting the look of a smoother and more refined complexion. This astringency also makes it beneficial for incorporation into formulations for hair care products, as it works to strengthen the roots and thereby reduces hair loss. In addition, it hydrates to eliminate the itchiness and dryness that is characteristic of dandruff.

In medicinal applications, Myrrh Essential Oil effectively speeds up wound healing by facilitating the skin’s regeneration, calming inflammation, and protecting abrasions from harmful bacteria that can promote the development of infections. Its ability to cause the skin and tissues to contract makes it ideal for stopping profuse blood loss. With expectorant properties, Myrrh Oil is known to provide respite from coughing, congestion, and phlegm, thus helping reduce the symptoms and discomforts of respiratory ailments and helping the body rid itself of viral and fungal infections. This makes Myrrh Oil a popular ingredient in remedies for colds, asthma, and lung congestion. The emmenagogue property of Myrrh Oil is reputed to normalize the menstrual cycle.

In massage applications, Myrrh Oil helps to not only encourage the restful feeling of relaxation but to also soften and smooth the skin while strengthening the muscles. While it boosts circulation, Myrrh Oil also enhances immunity by promoting the body’s detoxification through perspiration. It also achieves this by purifying the pores, easing digestion, and supplying the tissues with oxygen.