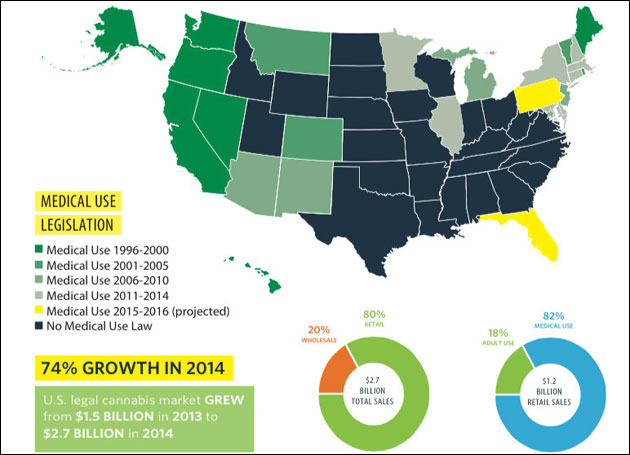 Following sweeping change to US marijuana policy during the past decade, many are wondering if there are other popular drugs that deserve a legal role for the public's recreational and medicinal benefit. Psychedelics (LSD, psilocybin, ketamine, etc.) seem a logical next step in the opinion of many researchers and enthusiasts alike. Though more famous for their role in kaleidoscopic hiddiedom, psychedelics have always inspired great clinical interest since their Western introduction some 50+ years ago. Today, many researching are touting the psychedelics listed above for their incredible effects on Depression, PTSD, and other mental illnesses.

Psychedelics were on their way to being medically legitimized in the 1960's. But negative press generated by Dr. Timothy Leary and his ilk gave the drug a bad name among the American public. Seen as a chaotic party drug with endless potential to addle its users, and medical value impossible to harness, LSD and psilocybin research became drugs unfit for study among sober-minded scientists. LSD's discoverer, chemist Albert Hofmann, called LSD both "medicine for the soul" and "my problem child" during this time. Today, the mad scientists of the psychedelic 60's are dead, and the drugs are no longer as culturally stigmatized. Having never truly dipped in popularity, psychedelics continue to be tremendously popular all around the world. Given cannabis's recent assimilation into the American mainstream, it would seem that psychedelics' time may have come.

Johns Hopkins in Baltimore is one of the leading research facilities with intensive studies focused on psychedelic drugs. In thousands of trials, researchers have found results consistent with the thoughts of Hofmann at the tail end of the last millennium. Given a proper "Set" and "Setting", psychedelic drugs may be administered with great positive effect on a patient. "Set" refers to the individual, his or her feelings, emotional stability, and optimism regarding the experience at hand. "Setting" refers to the physical location, the circumstances surrounding it, and all people and objects that will come in contact with the patient during the duration of the drugs' effects. When the administration of such drugs is concurrent with psychological counseling and guided meditation from a skilled individual, the mental trauma that can underscores a whole host of mental illnesses can be unseated.

It is important that this "Setting" to be secure. Because psychedelic drug users may be very vulnerable to mental stresses and suggestion, people who take these drugs outside of a medical setting can have very unpredictable experiences. But because these drugs are fairly easily available, legality notwithstanding, it seems that a legitimate forum for their proper use should be instituted. With cannabis policy acting as a guide, common-sense legislation can give psychedelics a proper place as the most powerful emotional medicines yet known. And it can't happen soon enough. With thousands of businesses and medical applications surrounding cannabis, like Leafbuyer, the market would clearly bloom around legalized psychedelics. But with carefully crafted policy and public education measures, psychedelics can fill a very important and meaningful niche in a society in need of better mental health care.