“One ring to bring them together

and in love bind them…”

(modified from J.R.R. Tolkien’s Lord of the Rings)

Note: This is not a sequel of Tolkien’s famous trilogy. Rather, this is a dissection of the anatomy of engagement rings and diamonds as women’s best friend. 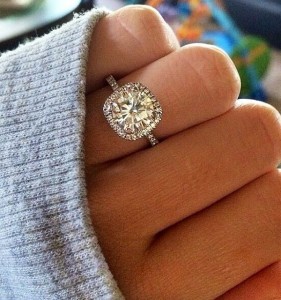 It is said that pre-historic cavemen tied cords of braided grass around the wrists, ankles and waists of their mates to gain dominion over them. But it was not until the 2nd Century BC that the tradition of rings started. Pliny the Elder recorded that grooms during this era give their brides a gold ring to wear during the ceremony and at special events. Then, the groom would give a second ring made of iron for his wife to wear at home. This gesture was symbolic of the binding legal agreement of the wife to her husband. Since then, engagement rings have been part of the courtship process between a man and a woman. And how could this process end more perfectly than with a rock on her finger? As women say, if they like it then they should have put a diamond ring on it!

The custom of giving an engagement ring is universal. Back in ancient Roman tradition, the practice of placing the engagement ring on the left ring finger was grounded on the belief that the left ring finger is directly connected to the heart through the vena amoris which literally means the vein of love. Other ancient cultures also emulated this tradition. In 2800 BC, Egyptians adorned their dead’s left hand’s third finger with rings made of a single silver or gold wire.

Today, engagement rings have not only become the symbol of love, but also of eternity. The circular shape of the ring is more than just plain geometry. Having no beginning and no end, circles are illustrative of eternity, wholeness and perfection. Thus, an engagement ring is the perfect archetype of genuine and everlasting love.

Words are cheap. I need an engagement ring.

There could only be one reason why a man gives a woman an engagement ring: marriage. While women gush over the question, “Will you marry me?,” it wouldn’t be the same without a ring to accompany it. An engagement ring symbolizes the promise of marriage. It represents the man’s commitment to love and cherish the woman in a lifelong relationship. It not only guards the woman’s finger, but also her heart and mind from other interested suitors. When a woman wears her engagement ring, it sends a signal to other men that she is no longer available for courtship.

It’s not just about the ring.

Women are romantics — but not in the hopeless way. Though women tend to sentimentalize and romanticize almost everything, the fact is that women are just so in love with the idea of love. And that has become the strength of every woman: love. Women put different meanings into everything, and a romantic gesture of kneeling down and opening a Tiffany box with an engagement ring embedded on a velvety surface will just break her down into streams of happy tears. This is not to say that rings are a necessity for marriage. But women believe that every action is guided by motives, whether genuine or selfish. And for a man to buy her an engagement ring usually conveys his good intentions of committing his mind, body and wallet to her “for richer or for poorer”.

Engagement rings are investments for a lifetime

As the joke goes, no woman hates a man so much that she returns the diamond ring he gave her. Though a man’s love may not last for a lifetime, engagement rings are something every woman would hold with them forever. It is a treasured possession a woman can pass on to her progeny. Engagement rings are heirlooms that will carry out the tradition of intimacy and romance to the next generation. (Remember when Prince William gave her mother’s engagement ring to Kate Middleton during his marriage proposal?) So, when he buys her a diamond engagement ring, he is buying something that will be treasured for a lifetime.

So why put a diamond and not a chicken nugget on it?

Diamonds are regarded as paragons of purity and prestige. History dates the very first diamond engagement ring in 1477, when Archduke Maximillian of Austria proposed to his betrothed, Mary of Burgundy. This gesture of lavish generosity was since epitomized among the aristocratic members of the society — so much that the Victorians began to romanticize ornate engagement rings designed with mixed diamonds and other gemstones as symbols of genuine love.

In the late 1800s, the emergence of the De Beers mines in Africa have made diamonds more accessible. A comprehensive campaign was launched to educate the public regarding the diamond’s quality and elegance through print and radio ads and celebrity campaigns. Since De Beers launched their now classic slogan, “A Diamond is Forever” in 1947, diamond rings have been linked to the concept of “eternity” and “purity” in matrimony. Print ads have compared diamonds to Dali’s and Picasso’s paintings which communicated the message of the diamond’s uniqueness and priceless value. Moreover, the diamond’s proverbial durability under extreme pressure reflects true love’s ability to beat all odds.

Today, engagement rings continue to be regarded as symbols of romance and matrimony. These can indeed be a woman’s best friend. However, no rings or any jewellery could ever replace the genuine passion and commitment a man could give to a woman. A ring could bind two people together, but it is only love and respect that can seal their relationship for a lifetime.