After we take into consideration a teams overall strength each week of the season there is no statistic that properly measures momentum. Going into the first game of the 2015 NFL season this Thursday there is no way to measure how well the Pittsburgh Steelers fans will help them over the New England Patriots.

The best way to measure this is to look at a football squads record against the spread at the end of a season compared to how that translated into the performance the following season.

Here is a helpful chart with the data plotted:

A team that did not win a lot against the point spreads at the end of one season actually played and performed better against the spread during the first week of the following football season. Of course the inverse would hold true according to the data in the chart above. It’s the opposite for teams who covered the spread at the end of the previous season.

If we plot these points, we get a chart that looks like this: 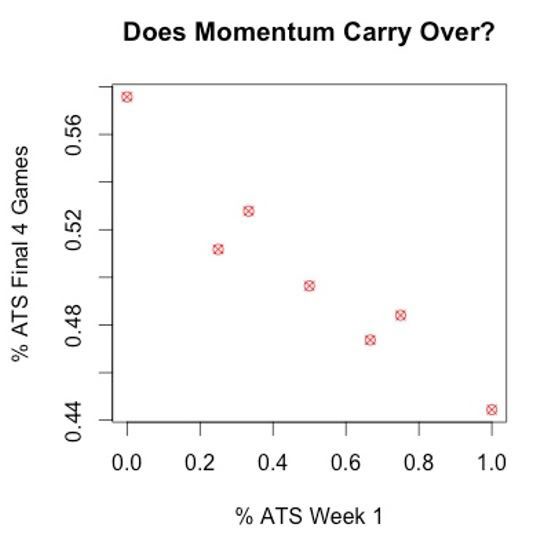 Now looking at the plotted chart above you can see that the negative relation is very obvious. There are no serious outliers in this data but if you run a logistic regression on a team covering the spread in week 1 the variable containing a team’s percentage against the spread for the last 4 games of the regular season comes up with a p-value of only .13.

Still there are many other variables that we have not taken into consideration and if we do input this data we should be able to come up with a much larger dataset of significance.

Some of these factors that we didn’t take into consideration but would be of great value are:

The fact that teams that had a lot of success at the end of one season do poorly at the beginning of the next is a due to regression to the mean combined with the public not understanding this. As Barnwell proved, a team that finishes strong does not perform significantly better at the start of next season-there is no evidence of momentum. But, for some teams at least, the betting public believes that the team’s form will continue into the next season, leading to the relationship that we see.

It should be emphasized again that this relationship is very slight, as expressed by the not-quite-significant p-value. To put it into terms of money, however, if you had had bet against the 54 teams that had not lost a game ATS in their final four games of the previous season you would have won 30 of those bets. If you bet $1 on each game, with 5 percent vig, you would have made a total of $4.57, for a return of a little over 8 percent. Betting on teams who had underperformed at the end of the previous season would net you only a little more, with a return of just over 12 percent.

So you shouldn’t blindly base all your bets on how a team did in the past few games of the previous season, especially when the team itself changed a lot. Then the public may no longer think they have momentum, but it has been profitable and useful to keep this information in mind.

If you were wondering which teams you want to be wary/enthusiastic about for Week 1 of this NFL season, there are three teams that were undefeated against the spread in the last four weeks of the 2014 season, and another three that didn’t cover the spread once. The teams without a win are Miami, San Francisco and Tennessee, while Pittsburgh, Seattle and Dallas were perfect ATS down the stretch. Keep an eye on them.

Hope you enjoyed this helpful data set of statistics to start off the first week of the 2015 NFL season.