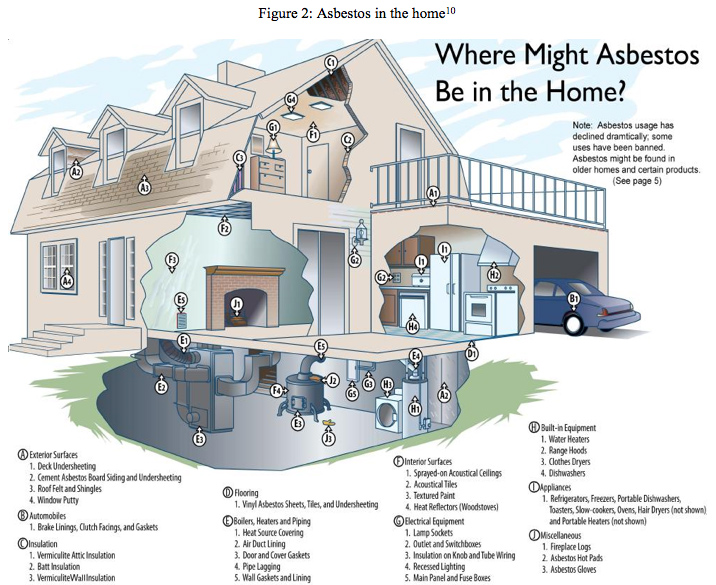 Was your home built before 1980? If so, then the naturally-occurring mineral known as asbestos was certainly used in its construction. Prized for its tensile strength and fireproof properties, asbestos has been used by humanity for thousands of years to help make everything from blankets to battleships. The industrial revolution launched an unprecedented level of mining and disbursement of asbestos and asbestos-laden materials leading to a 20th century where men and women were probably never farther than ten feet away from asbestos at any point in their lives.

However the whole time, from the pharaohs to the Cold War, people could see there was a tragic twist to the prevalence of this wonder mineral. Those who came into the most contact with asbestos always seemed to be the most likely to suffer from lung ailments, often at relatively young ages. By the early 20th century it was apparent to doctors and scientists that asbestos had a definite link to a particular disease of the outer lung tissue, a terminal condition named mesothelioma.

Thanks in part to the enormous dependence placed on the asbestos industry and resulting power it held, asbestos wasn't banned by developed countries until late into the 20th century. Of the 50 countries which no longer allow asbestos to be used to manufacture materials, the United States and Canada are not among them. Thanks to the research and work of asbestos lawyer groups in cities across North America, many families affected by seemingly indifferent industries have been able to see compensation for their tragedy. That said, asbestos remains a deadly threat to families so long as it's allowed to remain legally usable.

Asbestos fortunately doesn't become a problem without agitation and exposure to the resulting airborne particles. For folks living in older homes where asbestos is likely to be, it's equally likely that left alone it will never cause any serious harm to anyone under the roof. The Consumer Product Safety Commission strongly advises homeowners to leave asbestos alone once they've identified its presence. Moving asbestos even a little bit will eject fibers into the air which, when inhaled in great quantities, can lead to tumors along the lining of the lungs.

However, immediate action must be taken if observed asbestos in the home is loose, cracked, or otherwise damaged. If exposed to the air these asbestos materials can be shaken up slowly over time through the vibrations and reverberations from people walking across the floor, trucks driving by, nails being hammered, etc.

If do-it-yourself action to remove, replace, or repair exposed asbestos in the home is the preferred route-think twice. Unless the price of bringing in an expert is too far out of reach it's always worth it to have a certified specialist. DIY asbestos removal and repair requires, at a minimum, hazmat protection. Plastic sheeting must be laid down and taped up to isolate work areas. Absolutely no power tools of any kind should be used in the removal or repair of asbestos materials. Once removed asbestos materials must be safely sealed and properly disposed.

Men and women raising families in older homes where asbestos is most definitely present must be made aware of the risks posed by this potentially devastating, albeit useful, building material. That being said, asbestos undisturbed and unexposed is practically harmless. Make an effort to identity where in the home asbestos material is located and inspect every few months for damage. If repairing or replacing asbestos yourself, tread cautiously. For the most part it's almost always a good idea to call in a licensed asbestos removal specialist if the material poses risks to you and your loved ones.