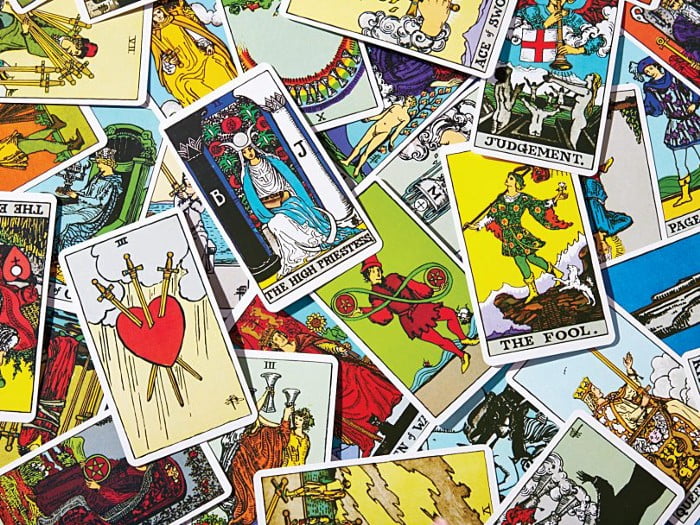 A fun game for some, mystical and transcendent for others. Tarot cards have been around for as long as we can remember. If you’re interested to know what tarot cards are, stick with us until the end of this article.

Tarot cards date back as far as the 1400s and were initially used as playing cards before it earned its place in fortune-telling and mysticism. Invented in Italy around the 1430s, the first tarot cards had Italian suit marks which represented an era of experimental period in card design. Known games are the Italian tarocchini, the French tarot, and the Austrian Königrufen.

Modern tarot decks are made up of 78 cards divided into two groups. The minor arcana are 56 cards, 14 from each suit which could be wands, rods, staves, or batons (clubs); cups (hearts); swords (spades); and coins, disks, or pentacles (diamonds). It has pip cards numbering from one to ten and four face cards; the King, Queen, Knight, and Page. Arguably the more popular set is the major arcana, 22 special cards, also known as trumps. Here are the trump cards in order.

And the Fool, usually unnumbered.

To this day, some of these games are still being played throughout Europe as conventional card games and are not associated in occultism, mysticism, and divination.

Tarot cards have been adapted into fortune-telling in the late 1700s where cartomancy became popular. The playing cards were then given meanings that help in telling one’s future; the questioner being the one’s future is revealed and the fortune-teller unweaving the truth in the cards. The major arcana, typically the ones with more intrinsic and imaginative illustrations were used to refer to the spiritual matters and important trends in the questioner’s life. On the other hand, the minor arcana had their own specific interpretations.

Staves were related to business matters and career goals, cups were often associated with one’s love life, swords and spades to represent conflict, and coins were aptly linked to one’s money and material possessions. The first practitioners of tarot cartomancy believed that such cards were derived from the Book of Thoth, the Egyptian god of knowledge and writing. And although its popularity for fortune-telling stemmed from this belief, the narrative for tarot card reading is being rewritten by modern tarot card readers.

In modern tarot card reading, as is expected from a regular deck of cards, the tarot cards are to be shuffled. The fortune-teller is to lay out a few cards in a spread. The meaning of each card is modified by factors like its position in the spread and the adjacent cards surrounding it.

For others who have not been immersed into tarot cards, fortune-telling could look like something divine and unnatural is speaking. But for some, tarot reading works like an in-depth conversation that uses the cards as avenues with implied meanings. The common misconception that tarot card readings can give you a sneak peek of what the future looks like is not entirely true. Instead, tarot card reading provides the questioner a deep insight to the different areas in their lives with the help of the cards in hope to have them connect with their inner selves and gain true wisdom.

The cards do not tell you your future, the cards guide you to it. Have a search online and find out where to buy tarot cards so you can see what the future holds for you.

In this day and age, speaking to a reader or even practicing tarot card reading will no longer get you questioned by inquisitors and burned at the stake. Tarot cards can give you a deeper understanding of yourself and allow you to reconcile with the truth you uncover as you dig deeper into your own thoughts and experiences.