The beginnings of the longstanding watchmaking adventure in the Canton of Neuchatel date back to as early as 1650, thanks to the incomparable know-how of Daniel Jean-Richard, who is credited with initiating watch production in the region. The mastery of watchmaking is closely linked to the dexterity developed by local artisans in making various kinds of tools, since the valley had been active in the iron industry from the earliest antiquity.

In the Val-de-Travers, it was in Fleurier that the first watches were made, and we owe its introduction in 1730 to the talented David-Jean-Jacques-Henri Vaucher. Ferdinand Berthoud, born in Couvet in 1723, contributed to the growing reputation of Val-de-Travers watchmaking thanks to his renowned genius in the construction of marine chronometers. 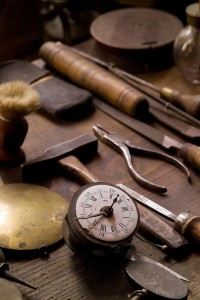 In 1800, ten to twelve watch producers were established in Fleurier, which became the main centre for making modestly sized clocks and watches. In 1820, the introduction of the Chinese watch by the Bovet brothers, who enjoyed exclusive rights to watch imports in China, gave a vigorous boost to the watchmaking trade. By 1840, companies such as Vaucher freres, Dimier freres and then Juvet freres, also specialised in the production of Chinese watches.

The extraordinary watchmaking prosperity of the Val-de-Travers is closely linked to the reputation acquired by the Fleurier Watchmaker's School, opened in 1851. In 1874, Georges Piaget founded his company in La CÃ´te-aux-Fees. The pursuit of his ideal of high-quality watchmaking was to ensure the lasting success of his family firm. In 1890, Fleurier was home to around thirty watch companies which, in addition to China, mainly exported their timepieces to Egypt, Turkey, the United States, England, Spain and France.

The birth of Charles-Edouard Guillaume in 1861, in Fleurier, was soon to revolutionise precision watchmaking. This brilliant physician won the Nobel Prize in 1920. He is the brains behind the crucial discovery of Invar and then Elinvar, two nickel and steel alloys which made it possible to avoid losses in precision due to the expansion of iron, a material still used in making the balance-spring.

At the same period, a movement blank factory was founded in Fleurier by the Jequier-PetitPierre association. In 1915, three factories merged under the name "Fleurier Watch Co", which extended its business to all five continents.

In 1930, there were over thirty watch companies in the Val-de-Travers. The successive crises of the late 19301, and then the 1970s, had a severe impact on the watchmaking industrial fabric of the Val-de-Travers. Nonetheless, the know-how was not lost, and in the mid-1970s, Parmigiani Fleurier set up its workshops in Fleurier. The Bovet Fleurier was reborn in 1989, giving a new lease on life to its prestigious past, followed by the establishment of the Chopard Manufacture SA in Fleurier SA. Vaucher Manufacture Fleurier SA, a sister company of Parmigiani Fleurier, was officially inaugurated in 2003. The creation of the Fleurier Quality Foundation certification stems from a rich historical background that has undoubtedly played a premier role in the economic evolution of Swiss fine watchmaking.