The third edition of Malta Fashion Week started on Sunday as the designers participating to the event finished making the final touches before the world could see their brand New Spring 2014 collections. And what better location to find than Malta, this southern European country that has already featured two events of the same kind? 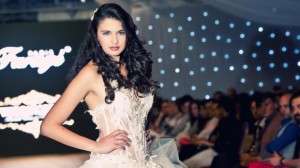 Malta Fashion Week started with the fantastic FaragÃ© Paris Bridal Collection Wedding Bells, hosted at the Xara Lodge countryside venue which is located near the city of Medina. The opening show featured elegance and grandeur exposing the newest trends regarding stylish wedding dresses. Ethereal white wedding gowns were taken by the models to the catwalk, the dressed featuring intricate and delicate feathers and lace details but also Swarovski embellishments. The entire show was so surreal, it almost made the viewers think they were watching a fairy tale show.

The day two featured the collection called "Feast Patterns" made by designers Charles Borg and Ron Van of Charles and Ron. The collection is a celebration of the Maltese icons and motifs, filled with modern day trends of the late-50s inspired shapes. Along with the bright colors of the collection also came the rainbow make-up that the models wore: greed eyebrows and coral pink eyes. The models figures were complemented by perfectly pink blush cheeks and fantastic hair. All in all the entire presentation was quite a view, and anybody can watch it on TV.

The jewelry also complimented the color palette adding a twist to the entire view. With pieces looking like something dug up from an archaeological site, the hair braids, necklaces and earrings were designed out of materials such as stones, shells and corals but also fur.

Among those who received awards, we would like to remind of the unique award received by Adrian J. Mizzi. He was unaware of the fact that he will receive the award and he appeared surprised and shed some tears when he was handed the award by his core team. Mizzi received a very special red award for his fifteen years work of promoting Maltese fashion talents.

There were also two additional Awards that were handed to Marisa Grima and Steve Vella in recognition of their substantial contribution to the fashion industry.

Rowen is author at LeraBlog. The author's views are entirely their own and may not reflect the views and opinions of LeraBlog staff.