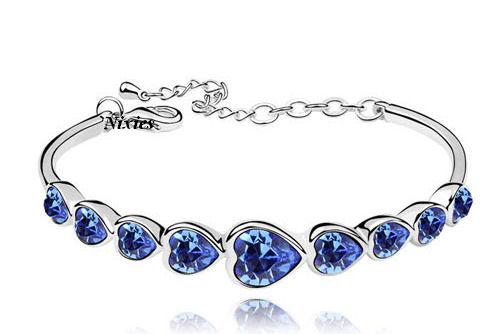 Found only in one place on earth, tanzanite is arguably one of the most vividly stunning gemstones on earth - its brilliant blue lustre is truly a sight to behold.

The following guide will explore some interesting facts about these outstanding gems, as well as outline some top buying tips when it comes to shopping for tanzanite bangles.

This superb gemstone is classified as a blue zoisite species and was first introduced to the general public and made popular by Tiffany's of New York to capitalise on its glorious beauty and rarity.

The primary and secondary hues in tanzanite are blue and purple, while too much display of violet is considered undesirable.

In its natural state, tanzanite is a brown colour and thus its exquisite beauty was never recognised until a grassfire swept the land and heated the stones, transforming them into brilliant, sparkling blue gems with flashed of purple tones. Some tanzanite specimens have later been found close to the surface if the earth in gem-quality blue without the need for heat treatment.

Tanzanite gets its name from the place of its origin - Tanzania in East Africa, which is the only place it is found. This glorious gem was first discovered in 1967 by Masai tribesmen in the foothills of Mount Kilimanjaro. It is known as â€˜The gemstone of the 20th Century'.

Tanzanite is one of the most prized of the metaphysical crystals because it is believed to have a high vibrational energy - this makes it powerful in protecting of the wearer, as well as boosting spiritual discovery, communication and psychic power. Furthermore, tanzanite has a calming and soothing effect and is thought to be a good stone for people considering a career change.

The lighter blue crystals in tanzanite are considered to help the wearer develop patience in their everyday life and assist in dealing with grief. The lighter purple shades bring wisdom of self, while the deepest shade of indigo combines the intuition of purple with the trust associated with pure blue. The dark indigo meanwhile is thought to be the ideal stone for spiritual journeys.

In terms of physical health benefits, tanzanite is believed to strengthen the immune system, detoxify the blood and improve vitality. It helps in the regeneration of skin cells and hair, while also aiding in recovery after medical or surgical procedures.

Tanzanite is regarded as the birthstone for December, while it is said to have a soothing effect particularly for the Pisces and Aries zodiac signs.

Rare tanzanite has an allure of mystery, magic, nobility and luxury. Its vibrantly sparkling iridescence makes it a must-have for any jewellery collector, from bangles to earrings, rings and necklaces.

Julia Littlewood is author at LeraBlog. The author's views are entirely their own and may not reflect the views and opinions of LeraBlog staff.