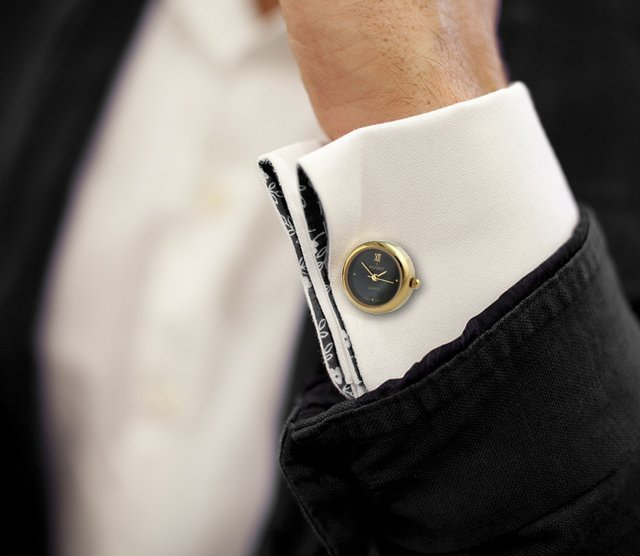 The cufflink, or at least its predecessors, has been a part of men’s wardrobes for about a thousand years. Royal families have been commissioning them to mark weddings and other special events for many centuries; there are even references going back to the Ancient Egyptians.

These days, of course, with the amount of fashion jewellers on the high street, the choice of cufflinks is vast. From basic silk knots to all manner of charms and novelty cufflinks, to glorious luxury gemstone jewellery in gold or silver, all you have to do is find your preferred style and add to a great shirt. Clothes may maketh the man, but perhaps it’s the cufflinks that maketh the shirt?

Back in the mists of time, before fitted garments became the norm, clothing was held together with string, pins or belts. As early as the 1500s, noblemen started to wear their shirts with ruffled wristbands tied together with string or ribbon, while in the 17th century lacy Renaissance cuffs gave way to much more practical ‘sleeve buttons’. These were ornate silver and gold linked chains attached to small decorative buttons made of jewels. Another popular fashion featured intricate miniature paintings on the underside of a piece of quartz or glass.

However, it was the impact of Alexandre Dumas’ famous 1844 novel ‘The Count of Monte Cristo’ that is generally credited with the birth of the cufflink as we know it today. The book contains detailed descriptions of Baron Danglars, one the main characters, whose turned-back sleeves sported enormous diamonds which were the envy of all onlookers.

It did not take men’s tailors long to capitalise on this new found popularity in men’s ‘fashion’, and the French cuff (or double cuff) shirt sleeve became a widespread trend. By the end of the 19th century, a cuffed shirt and a set of signature cufflinks were the undeniable mark of a true gentlemen.

Through the beginning of the 20th century, and especially during the Art Nouveau and Art Deco years, enamelled cufflinks were increasingly in demand, with experts such as Faberge perfecting the art of enamelling. Other leading designers included Cartier and Tiffany’s, and all pieces are still highly sought after today.

Cufflinks experienced a sharp decline in the 1970s, when mass produced shirts came with ready buttoned cuffs, eliminating the need for cufflinks. Since then, cufflinks have remained the mainstay of more fashion forward men, adding a touch of luxury and style to gentlemen’s wardrobes.

Since their inception, cufflinks have always been associated with luxury, which is why they were traditionally given as gifts – no gentleman would have purchased a pair himself. While recognising the importance of a set of cufflinks given as a wedding gift, say, or passed down from a father or grandfather, today’s men have liberated themselves from such conventions and are quite happy to buy their own.

In our fashion conscious times, cufflinks give you the opportunity to make a shirt, or suit, or entire outfit, your own. Whether in the form of chain links, cuff buttons, snappers, flats or one-piece links with enamel tops, hammered silver or sapphire adorned 18th carat gold, there is a handsome set of cufflinks out there for every style and taste preference. Cufflinks have come a long way but their central raison d’etre has not changed: Combining functionality with versatility and style, cufflinks remain the unarguable sign of a true gentleman.