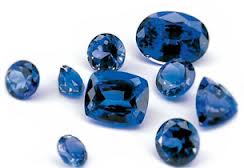 There are few gems with such a vibrantly outstanding hue than tanzanite - these stunning gemstones not only stand out for their intensity of colour, they are also highly prized as they can only be found in one place in the world, namely Tanzania, East Africa.

The following guide will explore some interesting facts about these superb gemstones, including some useful buyer's tips when you're hunting down tanzanite rings for sale.

Called the "gemstone of the 20th century",tanzanite has a truly spectacular colour, which ranges from light violet blue to ultramarine blue (and with a delicate hint of purple).

A Goan tailor and part-time gold prospector named Manuel de Souza discovered the vivid blue-purple gem in 1967 on a ridge of the Mererani Hills, some 40 km southeast of Arusha in Tanzania. Labelled “blue zoisite” at the time, it was the world famous jewellery retailer Tiffany’s who, two years after its introduction to the Western world, promoted the exclusive gemstone to the general public under the name Tanzanite after its country of origin.

This member of the zoisite gemstone family originated from crystal which was formed millions of years ago.These crystals grew in deposits on the inside of unusual elevations called inselbergs on a plain overlooked by Mount Kilimanjaro. For centuries they were hidden from human eyes, until one day some passing African Masai shepherds noticed them sparkling in the sunlight.

In addition to its breath-taking colour, tanzanite is highly trichoic, meaning it can display three different hues depending on the angle from which you view it - the gem can appear blue, purple or brownish-yellow at any given time. The brownish-yellow component is considered unappealing is overly obvious, so for this reason jewellery gradeis heat-treated to enhance its brilliant blue hue. 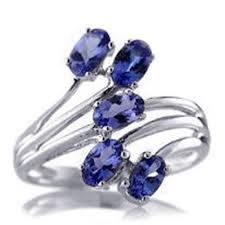 Its value on the Mohs scale is between 6.5 and 7, meaning it is softer than many other gemstones and for this reason it should always be worn carefully and never brought into contact with acids.

Another feature of this exquisite gemstone is that its structure contains a cleavage which leans toward a single direction. This makes it tricky to tackle during the cutting phase

Working with tanzanite can be a headache for cutting artisans, since it has a natural cleavage design that is pronounced in one direction. Care must also be taken for the gemstone to be free of inclusions as much as possible, since otherwise cracks can occur.

Nevertheless, TanzaniteOne, a major commercial player in the tanzanite market, has introduced its own colour-grading system for this unforgettable crystal which divides tanzanite colours into hues that range from blue violet to violet blue. In addition, the Gemological Institute of America classifies tanzanite as a Type I gemstone, meaning it is normally eye-flawless.

When hunting down tanzanite rings for sale, it's important to note that the prices of these stunning jewels tend to fluctuate more than any other gemstone because of irregular production at the mines in Africa. As a yardstick however, extremely high quality tanzanite of less than 50 carats can retail for as much as Â£633 per carat. If the stone you're looking at is a great deal cheaper than this, it is likely to be a fake.

Julia Littlewood is author at LeraBlog. The author's views are entirely their own and may not reflect the views and opinions of LeraBlog staff.