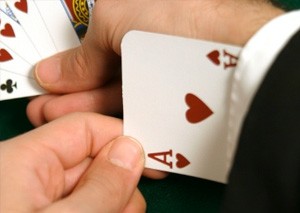 In this article, we are going to introduce few folks who made lots of money by cheating at casino games and who made millions by hacking systems, cracking codes, and counting cards. Because of these staggering cheats, casinos have had to strengthen their system security levels. Also, most bingo sites have chat rooms where the players can socialize and share precious information, hence companies can improve the security to prevent other audacious people from circumventing the rules in the future.

So, without further ado, let’s see the biggest casino cheaters ever.

Dominic LoRiggio was a master at blackjack and the craps tables and was also known by his nickname “the dominator”. After having practiced for years, he learned a technique called “controlled shooting” which means getting the rolls he needed in craps and win a lot of money.

This technique involved setting the dice in a certain way, gripping them precisely, tossing them so they stay together in the air and then having them land as gently as possible against the back of the walls of the craps table.

If you have seen the movie “21” released in 2008, then you will get the hang of this story, as the movie is based on the team we are about to tell you here.

MIT students with their professor developed a strategy during the 1990s which used statistical tactics in order to take the practice of card counting into a different and higher level at the game of blackjack.

A few members were counting cards and signal the count to a 3rd member and would bet big at high count tables. The other members would distract the dealers by placing huge bets of their own, ignoring the count and so roughly breaking even. at the end, they won a lot of money (millions of dollars) that they even formed an investment company to handle their bankroll.

Richard Marcus tried to make a living off of legal gambling but failed, so after finding himself homeless in the streets of Las Vegas, he decided to take a job as a baccarat and blackjack dealer. This job helped him to develop a technique to scam casinos and take away millions of dollars over his career as a cheater.

This method worked for many years until he got caught and was banned from casinos, but that didn’t stop him as even to this day he serves as a mentor and “educates” how to cheat the casino and even published two books.

Tommy Glenn Carmichael spent more than 40 years polishing his skills at cheating the casinos. Carmichael used to operate a television repair shop, but after he was introduced to “top-bottom-joint”, he started making a lot of money by scamming coins out of the slot machines.

In 1985 he was first arrested and later on sentenced to 5 years in prison. Even there, he worked on plans and techniques to scam the casinos after his release. He developed a new tool called “monkey paw” to alter and hack into slot machines. He continued to develop his hacking systems along with the changes of the of the slot machines and was making $10k a day using hacking tools.

Carmichael continued to operate and scam under the radar, but he eventually was arrested again in 1996, being charged with possession and manufacturing of a cheating device. The charges were dropped but in 2000 his luck ran out as he was federally convicted as the principal member of a nation-wide cheating operation.

Gonzalo Garcia-Pelayo is probably the most famous casino cheater ever when it comes to cheating the roulette wheel. Formerly a record producer, Gonzalo earned %1.5 million playing roulette in Las Vegas and winning after cracking the code behind the spinning wheel.

He believed the roulette wheels are not perfectly random and so started recording hours of roulette results with the help of a computer. He then analysed the results and discovered the probabilities of the game. He saw that certain numbers fall more than others and used his knowledge he acquired from hours of recordings to make over 600k euros in one of his casino nights in Madrid, Spain.

Later on, he came to Las Vegas and thrived with his technique. It was only after he had made nearly $2 million in winnings that he was from the casinos, as they claimed this method was unethical. He took his fight all the way to the Supreme Court which ruled that he did nothing illegal.

Garcia is the reason why to this day the casinos constantly test and monitor the performance of their roulette wheels.