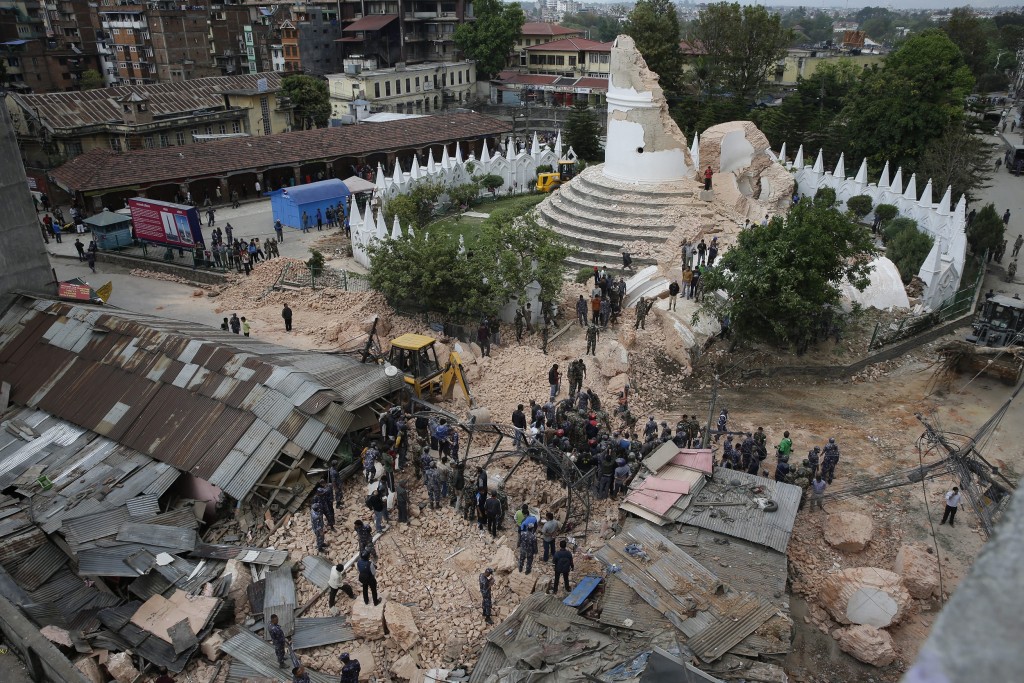 The 7.8 earthquake that hit Nepal's Katmandu Valley last Sunday is a tragedy. Nearly 4,000 people are confirmed dead, and that number is expected to rise. The damage to structures throughout the area has also been horrific, especially in Katmandu, the nation's capital. It is believed that hundreds of people may still be trapped in the rubble. The quake struck approximately 50 miles northwest of Katmandu, and was felt as far away as Pakistan, Tibet and Bangladesh. There were numerous aftershocks, including a magnitude 6.7.

If you live in California, news of the quake has probably started you thinking again about the Big One - the 8.0+ earthquake that is expected to hit this area within the next 30 years. It is believed the quake will occur along the San Andreas Fault and cause devastation up to 100 miles away.

Did you know that the water supply for San Francisco Peninsula residents comes from two sources (the San Andreas Lake and Crystal Springs reservoir) that sit on top of the fault, or that the fault passes through three key transportation, power and utility corridors in southern California?

Experts believe that if the fault ruptures, it will break almost everything that crosses it. In one study, a scenario was created in which a large earthquake ruptured the fault for 200 miles. According to the report, there would be 100 seconds of shaking, and the ground near the fault would shift as much as 20 feet in some places. In other places, there would be back and forth movement of up to 6 feet every second, causing houses to fall off of their foundation.

Earthquake scientists have been saying for years that a big quake could level cities with poorly built masonry structures. Katmandu was considered one of those types of cities. Many of its buildings are made of brick, clay, timber and stone. Other cities considered to be at risk for similar reasons include Mexico City, Mexico and Istanbul, Turkey.

Here's something else to think about. The Earth is made up of large, broken plates. These are sections of the planet's lithosphere, the solid, outermost shell of the earth. There are 7 major plates and 8 minor plates. All of the plates on the planet are in continuous motion. You will find the largest number of earthquakes and volcanic eruptions where these plates meet. They happen all of the time. There are an estimated 50 earthquakes taking place each day across the planet. In fact, the number of earthquakes with a magnitude 7.0 and above has been increasing over the past 30 years.

In Nepal, the India Plate is moving under the European Plate. In California, the Pacific Plate is sliding next to the North American Plate. Both regions experience quite a bit of seismic activity.

In California, considerable efforts are being made to ensure commercial and residential buildings are earthquake-proof. Even so, many structures are still not retrofitted. It's important for anyone in California to know whether or not their home could withstand a large earthquake. Houses with no earthquake retrofitting can fall off the foundation or collapse when the ground starts to shake. Sometimes, damage can be severe enough to require the home be torn down.

There are ways to prevent potentially dangerous situations in a quake, like house bolting, which is anchoring the home to its foundation or house leveling. Los Angeles and other earthquake-prone area homes benefit from these procedures. And the chances of damage from an earthquake increase when there is any type of pre-existing foundation problems.

If there is any chance your home has structural weaknesses, it's a good idea to get a foundation inspection done by experienced foundation contractors before the next quake hits. Foundation issues can be addressed by a foundation repair expert who has an extensive history of work on homes in your area. Retrofitting is the best way to limit damage from an earthquake.

Julian De La Torre is author at LeraBlog. The author's views are entirely their own and may not reflect the views and opinions of LeraBlog staff.