The life of the royals has always fascinated me and that is why I have chosen to take a much closer look at their royal engagement rings and present the ones that have impressed me the most. 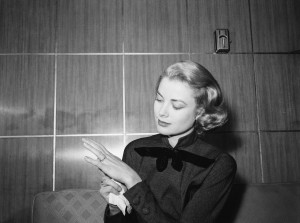 One of the most amazing royal stories, which sound like a fairytale, is the one of Prince Rainier III and the actress Grace Kelly. The two met during one photo shoot that took place in the Monaco Palace in 1955 and they instantly fell in love. Their love was so pure and strong that the Prince didn't wait long and before the end of the same year, he proposed. Prince Rainier III presented a beautiful diamond and ruby eternity engagement ring to Grace, which was designed by Cartier. Not long after however, the Prince must have decided that the future Princess deserves something bigger and better and he replaced the first ring with a much more traditional diamond ring again by Cartier but this time the diamond was 10.47 carats. The diamond was hugged by 2 baguettes. The ring was meant to stay on Grace's finger forever and she never took it off even during the filming of â€˜'High Society''. Less than a year later after their engagement, the Prince of Monaco and Grace Kelly tied the knot. The couple had one civil ceremony and one catholic ceremony respectively on the 18th and 19th of April. The wedding was so spectacular that it was called â€˜'The Wedding of the Century''. 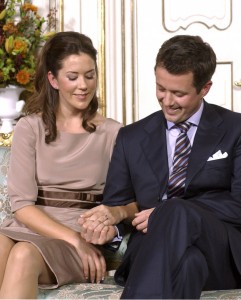 Crown Prince Frederik and Mary met during the 2000 Summer Olympic Games in Sydney. The two had the life changing meeting in a pub called the Slip Inn where Mary was having fun with friends. That was the start of her fairytale life as the man known to her as Fred and the one she fell madly in love with, was actually the Danish Crown Prince Frederik. The couple dated for 3 years before they got engaged in 2003. When Frederik asked Mary to be his wife, he gave her a stunning emerald diamond cut ring featuring 2 ruby baguettes. The stones on the ring were chosen carefully by Crown Prince Frederik as he wanted them to symbolize the Danish flag colors. At the day of the wedding, Mary also received another ring. It was made of white, 18 carat gold and had 24 square diamonds princess cut embedded in it. Crown Princess Mary wears both rings together. 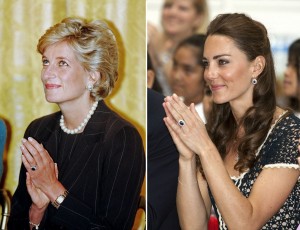 This is probably the most popular engagement ring in the world. There is not even one person that doesn't know how the ring looks. Catherine and William dated for eight years before the Prince popped the question. It was October, 2010 when Prince William asked Kate to be his wife and to spend the rest of her life by his side. The engagement ring Kate received belonged to the late Princess Diana, which made the engagement even more special and romantic. The ring itself is made of white gold and is a piece of art - the oval Ceylon sapphire is 12 carats and it is surrounded by 14 diamonds. It is an interesting fact that the ring was actually not uniquely made for Diana. In fact, it was her that chose it from a Garrard's catalogue. The wedding was 7 months later and was watched all over the world.

There are many more royal engagement rings that can be added here however, these are the ones that have left a trace in history and are remembered by the people from all over the world.