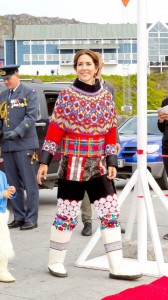 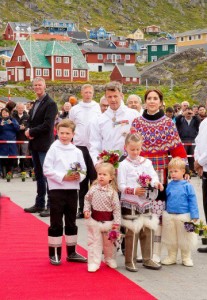 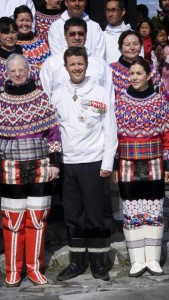 Mary is a very colorful person so the costume from the West part of Greenland she was given was just perfect for her. Every part of Greenland has different costume with different colors and patterns. The reason behind that is that in the 19th century, the costumes were made according to the status and age of the person wearing them. One distinctive feature of these costumes is the very long boots called kamiks. The boots are made from the skin of a seal with the idea of keeping the wearer warm. The kamiks come in different colors and every color has to suit the person the boots are given to. Young women and young girls wear the kamiks in white whilst elder ladies wear the kamiks in red. Of course, there is symbolism behind the color choice and in this case the red means that the woman wearing the boots is a grandmother. The pattern on top of the kamiks is also made of sealskin. It is made of little cuts of the skin that are colored and then sewn on the boots creating a certain pattern.

The trousers or shall we say the shorts are made of sealskin. The top or the anorak is made of fabric unlike the rest of the costume. The costume also features glass pearls, which were first introduced to Greenland in the 17th century when the Europeans brought various materials that were not typical for Greenland.

Nowadays, this traditional costume is only worn on special occasions like Easter, Christmas, weddings, confirmations and during the National Day. 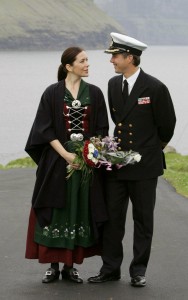 In year 2004, Crown Princess Mary and Crown Prince Frederik got married. The Faroe Islands were happy to host the ceremony and wanted to gift the couple with their traditional costumes. The costumes consist of two parts. Every piece of the costume is created by different people who are the best in their field. One would make the vest, one would weave the fabric, somebody else will do the embroidery, etc. It certainly is a project that people from the island like to get involved in and help with the creation of each costume.

The shawl and the apron for Mary's costume were made by a woman who embroidered the two parts of the costume with the beautiful flowers from the island. For Mary's costume the flower FjallabrÃºÃ°ur was chosen. The flower is very pretty with its blue and white petals and it can only be found on the top of the mountains.The flower chosen symbolizes where Mary comes from and that she is one very beautiful flower. The color of the shawl and the apron is dark green because it symbolizes the Islands of Faroe.