“Revenge and retaliation always perpetuate the cycle of anger, fear and violence.”

These might as well be the words that echo through the hallways in schools as traumatized kids slowly walk to their classrooms – escorted by teachers and other staff – merely days after a school shooting takes place that scars them for life, maybe fatally wounding their friends, classmates, teachers. Such is the grave scenario in the USA today, where children live in fear of facing attacks from shooters in school. What was once supposed to be a safe haven for the young minds to grow and blossom has now turned into something that terrorises them to the point of developing lifelong post-traumatic mental disorders.

As is no secret, gun violence in schools in the United States of America becomes the topic of a raging discussion at every electoral debate in the country and makes its way to the headlines quite frequently. While taking it to the authoritarian level to bring about preventive measures is well and good, maybe it is also time to pause and take a long, hard look at how things are in the U.S. schools and to what extent this affects the new generation of learners in the country.

Gun violence in schools: definitions to ponder over

As a non-profit organization named Everytown for Gun Safety reveals, the number of schools shootings in the USA for this year alone stands at 28. The woeful fact is that the frequency of such violent occurrences inside the school premises this year looks well on its way to trumping last year’s count (which stood at 67 cases of reported gun violence in schools in the USA). Here is a mapped view of the school shootings that took place in the country this year. 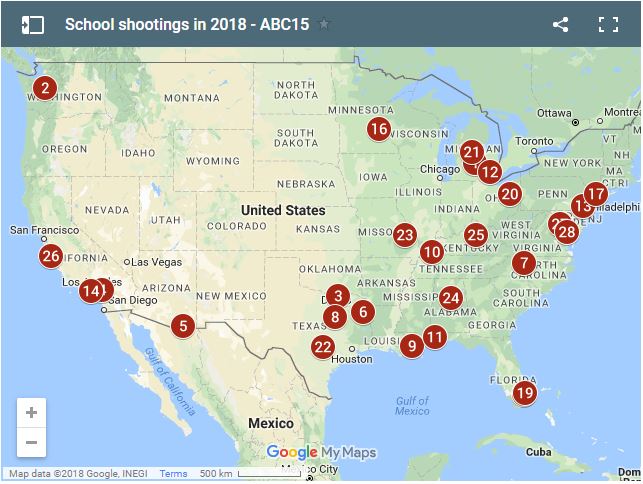 Mapping the number of incidents that have resulted in the deaths or grave injury to schoolchildren is ironical indeed, especially for a developed nation like the United States of America. Living in the tumultuous times of troublesome issues of violence in all forms that perpetuates all over the world, maybe it is time that we looked carefully at the stats of school shootings in the USA and what they might mean. It is of utmost importance at this hour to analyse the data from school shootings in the country for guaranteeing a safer future for our kids that is not marred by gun violence and deaths of their classmates.

The matter of school shooting and its distinction from mass violence needs to be cleared out at the very outset. As confusing definitions about school shootings and its many categories emerge, it is problematic to get a grip on what consists of such actions of violence and the preventive measure and policies that can be drawn up with regard to the incidents.

So how are mass shootings in schools defined exactly?

The definition of mass shooting in schools has been a matter of contention for long in the country’s investigating agency, the FBI as well as academicians alike. While many modifications were brought in to the definition, the latest one, as developed through management-school professor Adam Pah’s detailed study, includes three criteria to categorise an act of violence in a school premise as mass shooting or mass killing.

The current definition of school shootings is thus somewhat along the lines of:

A gun or firearm has to be discharged within the school premises involving the student and staff in some way for it to qualify as an incident of a mass shooting or gun violence in the country.

Pah’s extensive study on school shootings also revealed a connection between economic troubles and acts of violence where he showed that economic factors such as unemployment exercise a considerable amount of control over the rise and fall of the number of such incidents in a year.

Carefully considering what constitutes of mass shootings within school premises was thus the first step towards going for a thorough scrutiny of such incidents that have long been taking place in the schools in the USA. Now that what can be considered as mass shootings inside schools is elucidated, we can move towards an analysis of the stats about these acts of violence in schools and gauge what they are telling us about the condition of the education system in the USA.

Breaking up the stats: an analysis of school shootings in the USA

Over the years, many educationists, academicians, government bureaus, research agencies and the like have collected and carefully tabulated data on this matter of rising concern in the USA. The stats, when analysed, reveal a murky picture indeed, and one that sounds the doom of the future of formal education in the country if things are not brought to check swiftly.

From elementary to the university level, the stats show that no campus is indeed safe from the clutches of incidents of shootings. Here is a graphical representation of shootings that took place in the educational institutions, categorised by the levels of study. 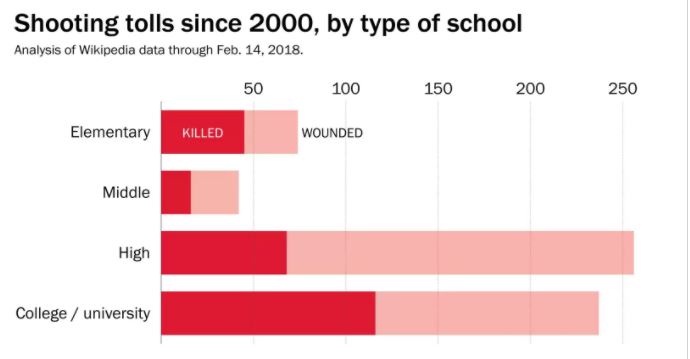 Figure 2: Shooting in Educational Institutions in the USA

universities in the country. The victims of such shootings, whether dead or wounded, constitute mostly youngsters of school or college-going age, naturally, and in some cases, teachers and staff have also been reported to have been injured or killed in the face of fury from the gunmen in the premises of academic institutions.

Split across the different levels of study, the following data shows the incidents across the country that has taken place throughout the years, starting from 2000. Taking a close look at each of them will give you an insight of area-wise occurrences of such shootings across the map of the USA.

Here is how the stats for the density of school shootings in the elementary level from 2000 have turned out to be, according to the studies. 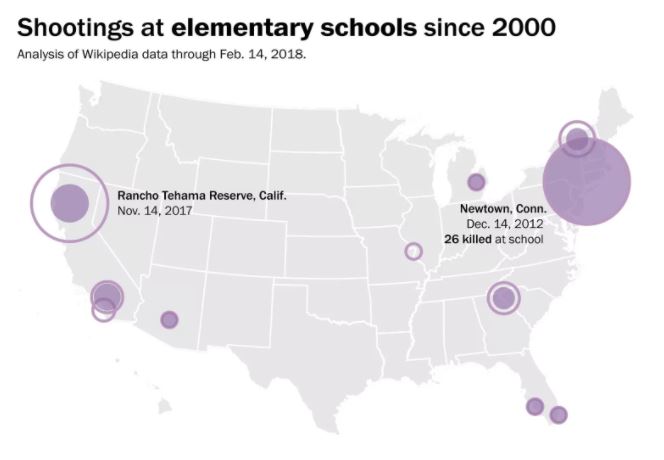 As for middle schools, here is what the studies reveal about the shootings that have occurred there since 2000. These stats, however, point to the fact that more shootings took place in elementary schools than in middle schools. This is alarming indeed, for children of a smaller age group are facing the threat of school shootings than the middle-schoolers in the USA since 2000. 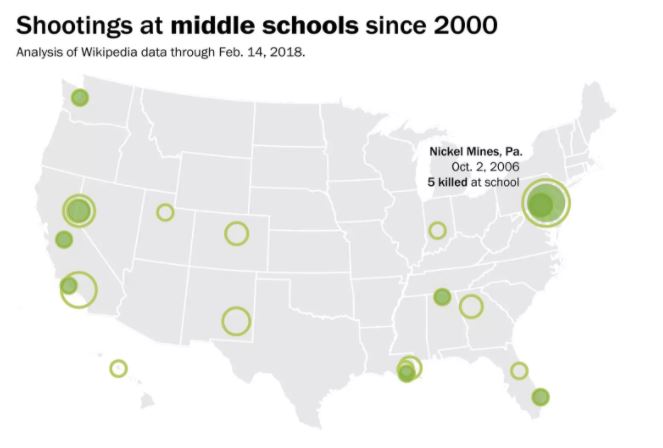 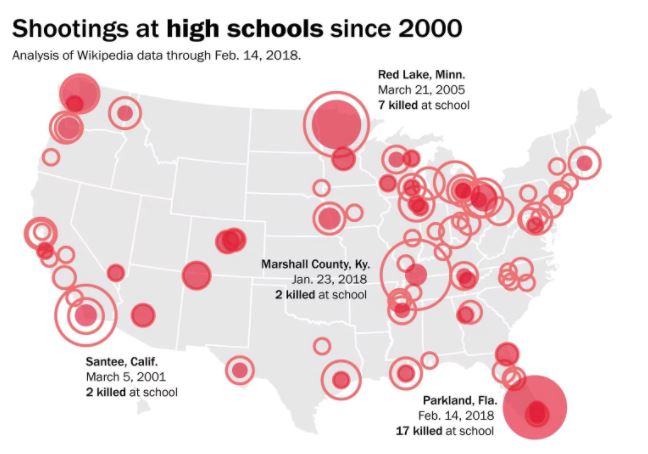 The school shootings in the USA are a much talked about matter among academicians, psychologists, government agencies and educational institutions, as it is a subject of intrigue indeed. Here is an overview of the stats from the studies that categorised the incidents of shootings as per the intent.

The categories that came out from the studies showed that a whopping majority of the shootings had a clear and predetermined target victim, as categorized under ‘Targeted’. As for the ‘Indiscriminate’ category, the shooters in these cases just pointed a loaded firearm and opened fire without a predetermined target in mind.

The studies about the victims and their categorization reveal a lot about the general mental health of the USA as a nation. The primary reason to draw such parallels is that according to the stats, the majority of the victims from these mass shooting incidents in schools belong to some minority community in the country – be it racial or ethnic factors that separate them from the mainstream ‘white’ population. The demographics of the victims of school shootings in the country thus reveal the following grim picture.

Figure 7: Victims of School Shootings by Race and Ethnicity

As can be observed, the ones facing the fury the most belong to the minority communities of race. Following them closely in terms of being victims of mass shootings in schools are the children belonging to the ethnic minority of the Hispanic community in the USA.

The Campus Safety magazine reports statistics collected from studies conducted by Centres for Disease Control and Prevention (CDC), Department of Education and the Secret Service, and Everytown for Gun Safety that presents the following data on the shooters and the occurrences that has taken place in the schools in USA from the early ‘90s to the current year.

These studies were primarily aimed at revealing the nature of shooters the types of children likely to turn into killers in childhood (by intent or otherwise), and the psychology or the reasons that worked its way in the minds of these young shooters. Opening fire on classmates or teachers from a loaded firearm is a grotesque picture indeed, and that is precisely why a look inside the mind of a killer is necessary to gain insights from their perspective.

What do the findings present? Here goes.

These were some of the most startling and alarming statistics as brought out as the result of many years of toil and hard work on the part of the researchers. They endeavour to put forth the data and analyse the stats so as to form an actionable plan as part of the administrative strategy in combating the growing levels of gun violence in the schools of the USA.

A matter of grave concern, school shootings and reported issues of gun violence within or near school premises is gradually proving to be menace plaguing our country. Here is thus hoping for school campuses across the country that are devoid of gun violence where the young minds can grow and blossom without having to live in the shadows of fear and trauma.

Fattal, I. (2018, February 14). Another School Shooting: But Who’s Counting?. Retrieved from https://www.theatlantic.com/

arifrashid is author at LeraBlog. The author's views are entirely their own and may not reflect the views and opinions of LeraBlog staff.