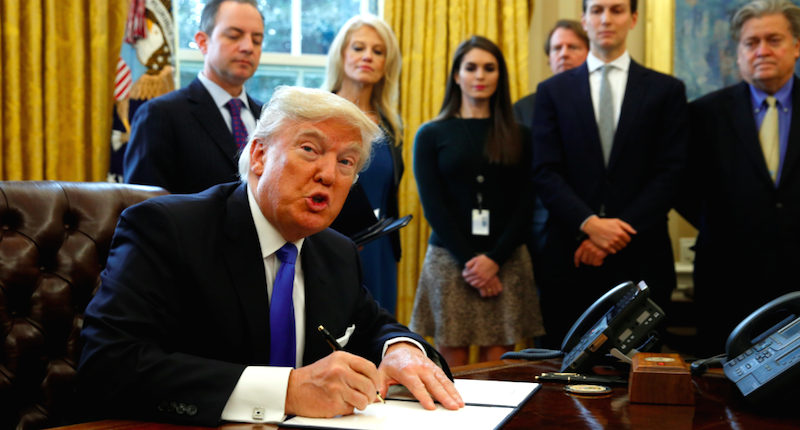 One of the ways that Donald Trump promised he would increase America’s economic wealth is through deregulation. Making good on his promise, he has made several changes — not just to the law and order of America, but also attempting to change the power that the Environmental Protection Agency has to create policies that stymie the power industry. Either fortunately or unfortunately, depending on which side of the argument you are on, Trump has been very unsuccessful at undoing policies due to greenhouse gas regulations.

In a major hit to his proposition to get energy flowing around the nation, the Supreme Court has ruled against his attempt to override federal rules aiming to curb Co2 emissions, which severely limits his efforts at dismantling emission rules. What might keep Trump from realizing his environmental-deregulation wishes is the EPA’s 2009 finding that carbon dioxide, along with five other specific greenhouse gases, are dangerous to the American public.

The findings indicate that the emissions from man-made energy-extracting sources and smokestacks severely impact not just the environment, but the public’s health as well. In their ruling, the Supreme Court upheld the decision because the government is obligated to ensure the safety of the public. The stipulation of “endangerment” is one that will not just block Trump’s attempt to repeal things like the Clean Air Act and other laws relating to the amount of greenhouse gases allowed, but also impacts other EPA protections he was hoping to override.

Even those Trump has hired to try to circumvent the laws aimed at protecting the planet from global warming are hard-pressed to find a way out. Unless the Trump Administration can take aim at the fact that CO2 emissions are dangerous to the public, then there is very little way that they can make much change to the regulations put in place by the Obama Administration.

If it were just an issue of global warming, then there certainly might be grounds to change the rules, but it isn’t. Since the science regarding climate change and greenhouse gases is less factual, overriding the new acts put in place might be possible. But since it was put into action to protect the public from danger, it is much harder to tackle — if it even can be.

Scott Pruitt, the new Trump-appointed administrator of the EPA, has a heavy task on his hands if he wants to find proof that CO2 emissions aren’t endangering people’s lives. In 2007, the Supreme Court made its original ruling in the Massachusetts v. EPA case, which found that the government has the right to regulate dangerous greenhouse gases through the Clean Air Act. Although Pruitt can attempt to dial the regulations back slightly, there is probably no way that he will be able to abolish them altogether.

Even if Pruitt can find that greenhouse gas emissions aren’t a public health crisis, then he still has to tackle the scientific proof that they affect climate change. To change policy, Pruitt would have to go through several steps. First, he would have to invite public commentary, and then he would have to provide a scientific argument against all that America has come to believe — specifically that CO2 and greenhouse gases aren’t dangerous. Many in the legal field feel as if that is tantamount to trying to roll a barrel uphill and is not a battle worth waging.

The endangerment finding is not just pushed by the Obama Administration; it has been used as far back as the Clinton Administration. Jonathan Cannon took a stab at creating a policy as far as two decades ago about the facts surrounding greenhouse gases and the danger they pose. The only chance that Pruitt has is that the Clean Air Act is very broad and encompasses an enormous amount of chemicals that might not have factual information behind their inclusion.

David Cohn attorney, can attest that logistics of what an “air pollutant” is according to the law is very vague and has been used by the EPA to regulate just about everything possible. Included in the definition are chemical, physical, radioactive, biological and other materials that are considered “pollutants.”

The only shot that Trump has is to attempt to get Congress to amend the specifics of the Clean Air Act, and to exclude from the act anything that doesn’t have proof of being a public health danger. It’s a huge long shot, and the chances are good that it would be a very hard sell even with a Republican-dominated Congress. Incremental cracks might be the best way to go, instead of trying to overhaul everything.