In last April we saw that the US senate rejected the new bill about the restriction of gun sales in America. This is an important step in the history of public and government relations in the USA as it proves the domination of lobbyings in this country one more time. It was really astonishing to witness such a rejection after the massacre of Newton last year and the death of 20 children in their school.

Right after this tragedy President Obama said it was high time for Americans to change their mind and push forward the evolution of new laws that regulate gun sales through the country. Despite the usual outcry of the conservative states, the weapon owners and the lobbyings controlled by weapon industry, we did think that this time government would make it right. Unfortunately, the US gun lobbying and their public relation power turned out to be much stronger that we ever imagined. How can we explain this defeat for Obama and the huge victory of the government relation experts? Here our policy analysis.

The bill was a compromise as it would only impose some backgrounds checks for weapon purchases. Politicians and Democrats are conscious of the power of gun lobbying in America so they gave up the idea of a ban about the selling of assault rifles. Though this kind of automatic guns are responsible for most of the massacres, gun lobbying forces invest a lot of efforts and money in government relation campaigns to back up the fact that the main responsible is the killer and not the gun. As usual the defense strategy of their government relation experts consists in showing restriction about gun purchases as a threat against freedom in the USA. These public relation campaigns urge a lot of Americans to perceive new laws and backgrounds checks as an open door to some Big Brothers projects. Moreover we can realize the power of their government relations when you learn that polls have showed that 86 percent of Americans back up a new restriction law. More than 54% of them would agree to ban the selling of any assault rifle in their country. So why the lobbying groups are such powerful and why their public and governmental relations are so much stronger than in the anti-gun groups?

US Government and lobbying 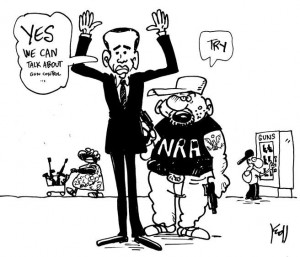 So what did it happen? When pro-gun lobbying groups heard of the new restriction law, they collected a lot of money. The National Association of Gun Rights raised $2,7million to bolster its public relation campaign and influence politicians. They urge their members to afraid democrat senators in conservative states by organizing protests and demonstrations in the streets. The promoted their ideas with propaganda sheets and harass the town halls by claiming their fierce opposition. On the other side, the anti-groups didn't create so much noise and we can partly explain it by the lack of money in these associations. But the most powerful strength of the NRA and its government relation experts is the money they raise when a new senator is elected. NRA is a big contributor when politicians drive campaigns in conservative states. They spent a lot of money to support candidates and can use some indirect money contributions to influence the politicians. During the last election they spent more than $25 million on lobbying spending. Before the vote of the restriction law they spent $500 000 in one day on advertising against Obama's project. Most of the time their public relation experts spread misinformation and wrong facts on anti-gun laws and anti-gun politicians. Their main weapon is fear and they use this fear against the politicians. This is what happened with the new law in April and why some democrat senators from conservative states voted against the law. Government relation can be a good thing as it can help politicians to be better informed by companies ans associations but it becomes an evil weapon when its goals is to use fear and influence politician's judgment.

raphwhite is author at LeraBlog. The author's views are entirely their own and may not reflect the views and opinions of LeraBlog staff.