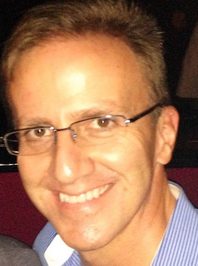 I was born in 1965 and have lived most of my life in the southcentral Pennsylvania region, near Harrisburg. I attended both Carnegie Mellon and Penn State Universities, graduating from the latter with a degree in English. I presently work as the AVP of Marketing for a large credit union.I’ve had numerous jobs at banks and credit unions for the past seventeen years, but mostly in marketing and e-commerce.

I’ve been interested in fantasy and science fiction all of my life, beginning with the original Star Trek television series. (Well, it actually began with the model kit of the Enterprise, which I found in a hobby store and thought was really cool. And which I later blew up. But that’s a story for another day.)

Then Star Wars came along when I was eleven and the effect was similar to what you get if you jam a lit M-80 into the middle of a peach. Just mind-blowing, and it’s not too much of a stretch to say that it changed my life. I never got into the toy collecting or dressing up aspect of fandom, but it certainly cemented what I wanted to do as a career.

I am, of course, a huge fan of The Lord of the Rings, both the books and the movies. Dune by Frank Herbert was another pivotal book for me, as was Philip K. Dick’s Valis. If you haven’t read them, go pick them up! You won’t be sorry.

I’m married to a beautiful and loving woman, Kelly, a graphic designer of immense talent who has an odd fetish for print fonts. I have a son and stepson I love very much when I’m not yelling at them or resisting the urge to choke them to death for not listening after I’ve told them to do something for the ninety-second time.

I also have a tough time taking author bios seriously, so unless you have specific questions you want to ask, I think I’ll quit before this bores even me to death.

I’ve published three novels in an epic fantasy series called The Osserian Saga: The Amber Wizard, The Words of Making, and The Commanding Stone. All are published by HarperCollins in the United States and by Blanvalet in Germany.

There is a deep history in the Osserian Saga, from the opening of the prologue to the richness of his wizards. David Forbes has created a rich world that would do well under further exploration … Forbes tears down a number of the clichés of the genre and reveals hidden truths behind what seem to be typical elements of an Epic Fantasy story.

The worldbuilding is superior to that of a majority of fantasy series out there. And the funny thing is that Forbes only offers us a glimpse of his universe. Yet there are numerous hints which indicate that there is definitely more depth to Osseria than what we discover within the pages of The Amber Wizard. The author possesses a fine eye for details, which is another feather in his cap. And during the Sundering and Dian’s Stair scenes, the imagery is akin to that of Stephen R. Donaldson’s classic Covenant books.

I’m working on several other novels in various states of completion. None of them are yet under contract for publication, but as soon as they are I’ll post information about them here. 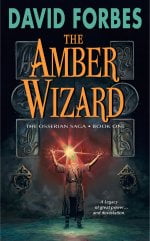 The Amber Wizard is the story of Gerin Atreyano, the crown prince of the kingdom of Khedesh. He is young and brash, and excels at most things he sets his mind to. He has a younger brother and two sisters with many talents of their own.

Gerin finds he has the potential to become an amber wizard, the likes of which have not been seen in nearly two thousand years. It is the most powerful kind of wizard, able to work spells far beyond the abilities of others.

Even before his training beghins he is beset with perils. A sorcerer from a rival nation places a spell on Gerin for some dark, unknown purpose. As he comes closer to realizing his potential, a door to the world of the dead opens unexpectedly, unleashing the spirit of a long-dead king bent on revenge for an ancient crime long lost from history.

Gerin and his family must race to find a means to defeat the Storm King as armies marshal on their borders. Their struggle will force them to make an unspeakable sacrifice if they hope to save Osseria from destruction. 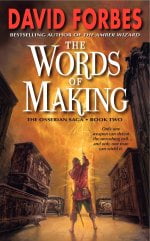 Gerin’s victory over the Storm King brings peace to Khedesh, but only for a time. Some within his own kingdom conspire against him, determined to prevent a wizard from ascending to the throne.

Invaders from across the sea appear on their shores in vast numbers. The Havalqa seek an ancient, mysterious magic known as the Words of Making, the literal power of creation spoken at the beginning of time to create the world and all things in it.

The Havalqa are also seeking Gerin Atreyano, who they believe holds the key to finding the Words. The invaders have power that can thwart even the magic of an amber wizard and the might to crush a continent.

Gerin and those he holds most dear must do everything they can to prevent the Havalqa from achieving their goals, otherwise the world as they know it will come to an end. 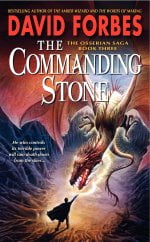 Gerin has temporarily driven back the Havalqa invasion, but they remain in Osseria, more determined than ever to find and take the Words of Making. Gerin’s hated enemy, the Voice of the Exalted, has opened the Path of Ashes as a means of bringing even more troops from their distant homeland.

With his family dispersed through the country and the nobles scheming against him, Gerin is more isolated than ever, as well as unsure in his new role as king. The nascent religion of the One God — whose divine messenger appeared to Gerin years earlier — is already splintering and threatening to ignite civil war in Khedesh.

In the midst of this, Gerin receives a mysterious message that may lead him to the secret of the Words of Making. But to reach them, he must undertake a long and difficult journey through enemy lands.

While Gerin embarks on his perilous journey, a bitter young man bent on revenge finds the long lost Commanding Stone, which wields the ability to control dragons that once ravaged the continent. But he soon finds himself a pawn in a deadly game, and his plan of revenge grows into a plot to murder the man he feels is responsible for the deaths of his brothers — Gerin Atreyano.