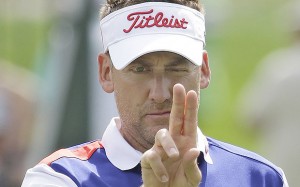 Having been ruled out of action for four months with a foot injury, Ian Poulter will still be involved in this year’s Ryder Cup, having been appointed as vice-captain by Europe’s skipper Darren Clarke. Poulter, who holds an incredible Ryder Cup record, winning 14 points from 18 matches over the years, joins Thomas Bjorn, Paul Lawrie and Padraig Harrington as fellow vice-captains for the competition at the start of October. Poulter’s most notable career moments have certainly come when wearing the blue and gold of Europe, and Clarke will be hoping that the Englishman can provide some inspiration to his players.

With Europe having won the last three Ryder Cups, including two years ago at Gleneagles in Scotland, the US team will be looking to get back to winning ways this time around at the Hazeltine National in Minnesota. With players such as Jordan Spieth, Dustin Johnson and Rickie Fowler, Captain David Love III certainly has an assortment of riches to select from. As a result, USA go into the tournament as the slight favourites with bookmakers Betway, with odds on Europe lifting the Ryder Cup for a fourth consecutive time currently at 5/4. With Clarke’s men only having to draw to go home with the famous trophy, the US are 3/4 to win the competition.

Veteran Phil Mickelson is closing in on his 11th straight Ryder Cup appearance having jumped from 6th to 3rd in the standing for places thanks to recent performances. Despite missing the cut at the Oakmond Country Club, having been 28/1 with Betway to win the US Open, the 46-year-old will surely yet again be a key member of the US team for the Ryder Cup. Mickelson’s compatriot Dustin Johnson won his first major at Oakmond having finished three shots ahead of Ireland’s Shane Lowry in a controversial final round this past Sunday. Johnson has seen his odds slashed for the upcoming Open Championship in Scotland, with the American now as short as 14/1 to claim successive major tournament success. Despite suffering from disappointing US Open campaigns, Jordan Spieth and Rory McIlroy are 6/1 and 13/2 respectively at the top of the golf betting odds at Royal Troon.

As for the Europe team, Masters winner Danny Willett and Rory McIlroy are currently leading the way in the standings, with a number of players facing an anxious wait to learn their fate. With just twelve players selected for both sides, the likes of Graeme McDowell and Martin Kaymer will need to finish the season strongly if they are to continue their Ryder Cup participation of the last few years. Despite a final round of 76 in the US Open to eventually finish in second place, Lowry will be looking to play himself into contention for his first appearance for Europe later this year.

The Rio Olympics are to provide players with an additional opportunity to claim silverware this year, with the sport being part of the games for the first time in history. Despite a number of players withdrawing due to concerns over the zika virus, the competition looks set to be yet another showcase event in the golfing calendar. With over sixty players set to take part, with a maximum of four from each country, Ryder Cup captains could well use the competition as an opportunity to pair potential pairings together to gain much needed playing time. With the comradery between European pairings often appearing tighter than those on the US team, Love III will certainly have a battle on his hands in terms of dealing with the egos of some of his most prized assets.