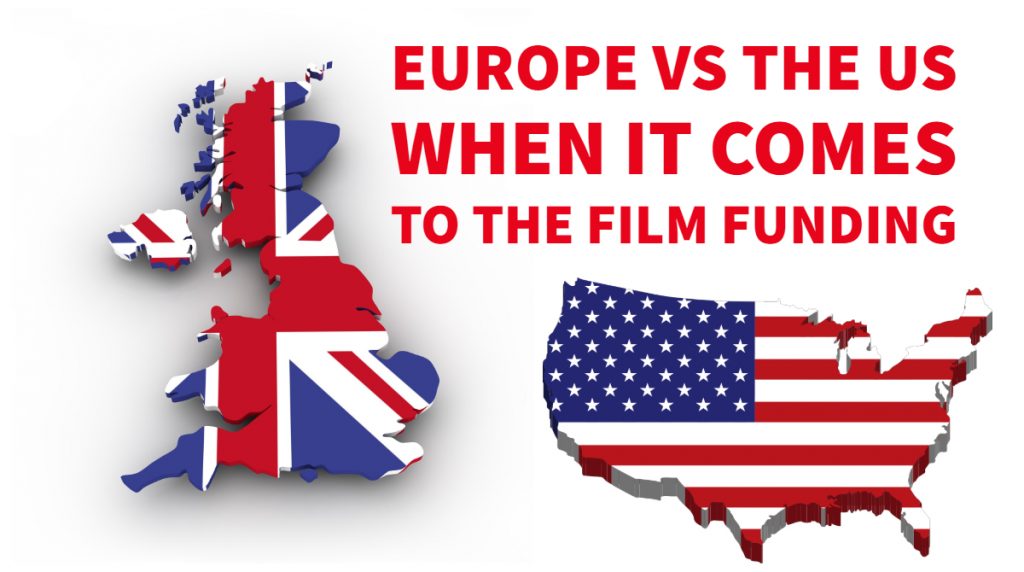 Film funding is something that might not interest you right now but the thing is that it’s essential if you’re planning to become successful and famous in the film industry. These are means that allow you to create and release film projects regardless of genre, theme, cast, and any other detail. While being the universal need for filmmakers all over the world, film funding is a very country- and region-specific field of investments. There are some film grants available only for European filmmakers and those accessible only in the US. However, owing to the tools like Olffi filmmakers from all corners of the world are able to get additional funding for their projects regardless of the location and citizenship. Yet, the idea of this article is to demonstrate the different tendencies and possibilities two biggest filmmaking industries offer to their members: Europe vs the US.

In the US, film funding mostly relies on studios and as a result, the contacts and ideas get hidden behind the iron curtain. One may argue that independent filmmakers still try to stick together in such a big world of Hollywood and so share their knowledge at conferences and workshops. Yes, it’s true, some knowledgebase is accessible to the wide audiences but in most instances, you are on your own when it comes to the search for financial assistance. Europe, in this case, is much more open. Directors, writers, and film-industry experts are not afraid to pitch their concepts in front of large audiences. Such openness promotes cooperation and even higher interest in film financing generally, says Gary Collins the CEO of Red Rock Entertainment, a film investment company based in the UK.

The US film industry is mostly focused on action and big screen films in the current era. They aim for bigger budgets, greater special effects, higher spending for post-production. In Europe, the scope of films is significantly lower. Projects aim for some intimacy, drama, dialogue with the audience rather than a plain boost of imagination. So the scope of European films is much smaller than the actions produced by the Hollywood stars. As a result, filmmakers in Europe don’t search for such great funding opportunities. They work with what they have and still create unique cinematography. An American director will need to get, let’s say $10 mln for a film and even if decides to seek funding in five places, the sums would still be significant – $2.5 mln. A European director can create a film for as little as $3 mln and will be able to cobble together financing from different producers funds, countries, etc. Lack of conglomeration is what saves European cinema world today.

As mentioned above, Europeans don’t require such huge budgets as Americans do. And the case is that the US filmmaking industry is targeted to the world audience. This requires larger crews for production, greater teams for pre-production to ensure that the film released is appropriate and acceptable in as many countries as possible. However, the European market is large in itself and so directors are aiming at the “local” audiences rather than overseas ones. Of course, it’s worth mentioning that British cinema world, in this case, is somewhere in the middle of these two strategies. It still aims for the bigger but works with the little.

But let’s get back to the point. Since Europeans are used to working with smaller budgets, they are trying to localise their product and so get a greater response from the audiences. It’s not about replication or adaptation of the American stories but rather the creation of unique culture-specific projects like The Siren or Fox and Hare Save the Forest. And since Europe lives by its long-lasting history, there is plenty of opportunities for such culture-/country-specific products.

Hollywood loves remaking famous and successful films regardless of their origin: whether domestic or overseas. And for some reason, film funds are still happy to support such projects at all times. The Shape of Water and The Lion King are just a couple of latest examples. However, in Europe, such a tradition doesn’t take place so directors aiming for such a path will likely to fail in funding their film. US film funds will gladly offer financial support for projects of all kinds regardless of their success as the original story while Europeans understand that one film cannot encompass adaptation to all living nations within Europe, so such projects are not seen as successful ones. However, Europeans love obscure or avant-guard subject matters and will gladly support young talents with uncommon ideas which are not the case for the overseas film industry.

It’s been mentioned above that one of the main differences between the US and European filmmaking industries are in the centralisation of power. American directors have to reckon with large studios when it comes to funding. They need to mainly rely on the funding for a single source while opting for additional fund flow only for some minor support. In Europe there are not such filmmaking moguls, except for the British filmmaking, so most aspiring talents look for funding at as many places as possible (including but not limited to the film funds, film investors like Red Rock Entertainment, and festival support) without the need to rely on and comply with the studio’s opinion on its own. Both systems have some downsides yet the European seems to be more variable and flexible one.

Red-Rock is author at LeraBlog. The author's views are entirely their own and may not reflect the views and opinions of LeraBlog staff.