Many people are unaware of the intriguing story behind McCune Masterworks, a producer of commissioned historical replicas and recreations, artworks and limited edition musical automata. It wouldn’t exist today without McCune Design, its sister company, which has enjoyed a long, illustrious history in Hollywood and across many other creative industries. McCune Design was founded by acclaimed special effects designer Grant McCune, who rose to prominence for his work on the original Star Wars movie. McCune received an Academy Award for Best Visual Effects for that work, and his commitment to perfection and creativity continues to be evident in the masterpieces that are created today by McCune Masterworks.

McCune’s approach to miniature visual effects spread quickly across the film industry, and his creations were featured in many additional films, including Spaceballs, Die Hard, Caddyshack and Star Trek: The Motion Picture. McCune was nominated for an Oscar again for his work on the latter. His company went on to produce works for major motion pictures like Batman Forever, Rambo, Iron Man 2 and X-Men 2, among others. All of these accomplishments cemented McCune Design’s position as one of the leading visual and special effects companies in the industry, and it laid the groundwork for what was to come later: McCune Masterworks.

McCune Masterworks was formed in response to high demand for the beautiful pieces created by McCune Design for major films. Discerning collectors clamored for their very own showpieces, and the talented team behind McCune Design decided to form the sister company to provide them. From the start, McCune Masterworks attracted talented, experienced artisans who were passionate about their work. This is reflected in the exceptional quality and attention to detail that is evident in every piece. Today, the company is enjoying more success than ever, and its latest creations — The Turk 2015 and Civil War Interactive — are enjoying a lot of acclaim and fanfare.

Unlike its sister company, McCune Masterworks isn’t involved in creating special and visual effects for the film industry. Rather, it focuses exclusively on crafting limited edition gifts, custom home furniture, one-of-a-kind functional art and historical recreations and replicas. The latest creations fall into the last category, and they are already enjoying a lot of buzz among history buffs and collectors alike. The company, which continues to be family owned and operated, develops and designs these creations at the historic McCune facility to this very day, and they continue to charm and thrill anyone who is lucky enough to lay eyes on them. 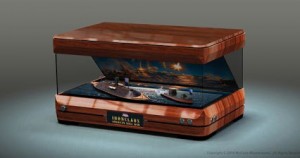 Civil War enthusiasts are chomping at the bit to purchase this beautiful piece, which depicts the famous battle between the Union-helmed Merrimac warship and the Confederate Monitor. As one of the best-known maritime battles of the 19th century, the event lives on in history buffs’ and historians’ imaginations. McCune Masterworks’ recreation is more than just 1:300 scale models of the two famous battleships. An interactive and immersive piece, it features sound effects, visual effects, controls and more.

The optional case in which the replica can be housed boasts the label “Reign of Iron.” Many aspects of the piece can be controlled by whoever owns it. For instance, owners may switch the setting from nighttime to daytime in reflection of how long the intense battle continued. Cannons and turrets on the Monitor can be manipulated in a number of ways. Plumes of smoke are illuminated by bright laser beams, making the scene all the more dramatic and exciting. The level of detail that went into crafting this piece is remarkable, and it is sure to make a welcome addition to the collection of any history buff or Civil War enthusiast. 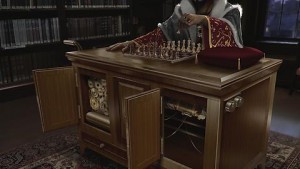 The Turk was a mechanical chess-playing automaton that puzzled some of the most illustrious minds of the day. An incredibly lifelike, full-size animatronic figure played chess against real humans and managed to come out on top every time. At the time, few could understand how a lifeless creation fared so well against some of the most talented chess players of the era. As it happened, the table below concealed a real person, who also happened to be a chess whiz.

McCune Masterworks has brought The Turk back with The Turk 2015. A life-size replica of the original, the classic edition can also be operated by a human hidden within the desk below. The contemporary edition takes things a step further with a pre-programmed chess database that’s capable of executing the right moves regardless of what its opponent does. In these modern times, people are more likely to guess that an actual human is somehow operating the automaton. However, many more are likely to be stumped by the contemporary edition and are sure to be shocked to discover that no one lurks in the desk below.

The two latest masterpieces by McCune Masterworks are more than worthy of the amazing legacy of Grant McCune. They reflect the fact that the company continues to strive for excellence with every piece it creates. Collectors, history buffs and others are sure to appreciate the amazing attention to detail and incredible effects that are featured on these and other works by the talented artisans employed by this famous company.

Sophia is author at LeraBlog. The author's views are entirely their own and may not reflect the views and opinions of LeraBlog staff.