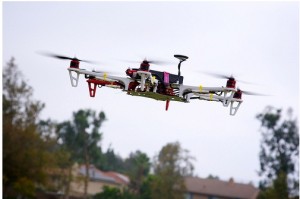 Man meets gadget, falls in love, the end. It's a never-ending love story but gadgets have come a long way. No longer are they the preserve of men and no longer are they the throw-away items bought for Father's Day and quickly forgotten. They've moved on. They're serious business: don't think boy and his toy, think Dad and his Drone.

There's a lot of talk at the moment about the future of artificial intelligence (AI) and what it means for our lives and our jobs. AI has definitely become more advanced in recent years, with Google recently announcing “Assistant”, a real alternative to Siri. But is AI now evolving from something that improves our lives as well as our jobs? Let's take a look at the cool ways AI is changing the workplace â€¦

Robots at The Hilton

Concierges everywhere must be worrying about the future of gadgetry, following the Hilton Hotels & Resorts' announcement that Connie, a new robotic concierge, will now be taking over at receptionâ€¦ Before panic sets in, Connie is in fact only designed to assist the other team members by using the cutting-edge cognitive computing technology developed by IBM to provide guests with general information on hotel features and tourist attractions.

Currently on a trial run at the Hilton in McLean, Virginia, Connie has been programmed with a number of Watson APIs, such as speech-to-text, text-to-speech, dialogue and natural language classification, to ensure the highest quality services are provided. For those who are now left wondering what on earth a Watson API might be, that would be a â€˜question answering computer system', which can answer in â€˜natural' language, as developed by IBM's DeepQA project.

What's more, during the process of interacting with people, Connie's software is designed to learn - allowing her to develop behaviour and speech patterns, and even respond to emotional cues. The Hilton isn't the first hotel to employ robotic gadgetry within their establishments; a number of hotels around California have incorporated Savioke robots to make deliveries to the rooms, but this appears to be the first time cognitive computing and machine learning technology have been incorporated.

Considering the amount of sci-fi films we've all seen warning about the perils of allowing technology to take over, this may be a less than pleasant surprise for some. However, unless we all migrate to the North Pole, it's probably unavoidable. Advanced gadgetry and robotics are appearing in all areas of hospitality and client-facing services - consider pizza for example. Yes, pizza! Domino's will soon have its very own version of Connie, in the shape of the autonomous delivery vehicle called DRU (Domino's Robotic Unit).

Another gadget with a human name, DRU has been designed with "sleek, refined forms combined with a friendly persona and lighting to help customers identify and interact with it". Described by Domino's as "a world first in the space of commercial autonomous delivery", this mini four-wheeled vehicle is designed with built-in, temperature-adjusted compartments to keep the pizza hot and the drinks cold. DRU is also capable of navigating its way direct to your door and avoiding obstacles along the journey. Admittedly, this is a far more endearing scene than one of menace and perhaps it might work - an all-hour, all-weather pizza delivery service with aâ€¦ well, I'm not sure DRU can smile yet.

Advances in AI and drones mean that rescue services can now employ their help in finding injured or lost civilians. In Canada, Riderless Technologies has developed an advanced, portable drone capable of detecting hikers lost in the hazardous Canadian wilderness. With ongoing developments in this field, drones could prove to be an invaluable resource in the efforts of wilderness rescue teams and natural disaster centres, saving lives worldwide.

Own Your Own Drone

Besides deployment within commerce and for institutional/governmental benefits, the increasing proliferation of robots and drones into the mainstream has further implications for consumers - we can now own one ourselves!

It might take a while before we all have a Connie to answer the front door, but the latest quadcopters are already on the market for general purchase. Take the 32 centimetre Recon Observation Drone for example, which comes with a radio controlled (RC) camera and on-board SD card to capture footage during flight. Home movies - or out-of-hours office surveillance-will never be the same again.

If that's too big for your humble abode, there's always the X12S "nano" drone at a mere 7 centimetres. There are even drones with electronic winches capable of collecting and carrying small items of cargo.

Who knows, if you get on well perhaps you could even enter into the next World Drone Prix! Yes, you read that correctly. This year saw a sporting first in the world of technology with the inaugural World Drone Prix (WDP) in Dubai.

Entered by drone pilots from across the globe, the WDP was run and regulated by the World Organisation of Racing Drones - yes, also a real thing. The organisation is a non-profit, non-governmental global regulatory body established by the UAE to "advance and govern the sport of drone racingâ€¦ accredit drone pilots, organisations and bring together manufacturers for positive commercial drone use".

Mountain rescue drones, robotic pizza boys and a concierge that never sleepsâ€¦ the reality is, we are in a new age when it comes to artificial intelligence and drone technology. Furthermore, considering $1 million was awarded in cash prizes at the last 2016 WDP, it's not such a bad idea for a hobby either!