The gums are inflamed when they are enlarged, prominent and with a deep reddish or purple color. Gums swelling is actually a very common condition and is usually caused by an accumulation of bacteria and toxins that are not properly removed during daily tooth brushing. It can also be a symptom of other conditions. It is advisable to treat gums inflammation early to avoid long-term oral problems of greater severity and irreversibility.

Swollen gums can be a consequence of multiple factors from a slight transient irritation caused by a dental hygiene product that is being used until a symptom of periodontal diseases or other conditions that harm health at other levels. Here are the most common causes of inflamed gums:

Gingivitis is the most common cause of gums inflammation, which is due to the accumulation of plaque and tartar in the gum line that ends up irritating and inflaming of gum tissues which support the dental pieces. In addition to the swelling, spontaneous bleeding or during brushing, touch sensitivity and purple coloration are some other causes in this case. 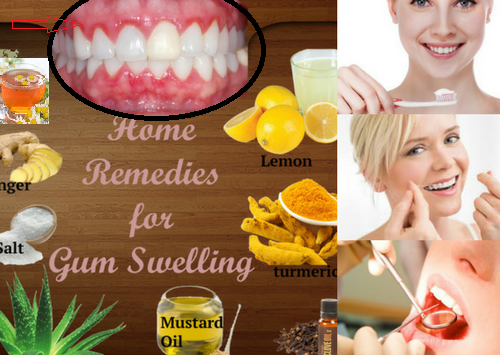 If gingivitis is not treated properly, can induce periodontitis. This condition occurs once inflammation or infection of the gums progresses to affect the ligaments and bone that support the teeth. Once these parts are damaged, the dental pieces gradually loosen finally they can fall. In fact, periodontitis is the leading cause of tooth loss in adulthood.

Swollen gums may be a symptom of certain infections caused by a virus or a type of fungus. Mostly, mucosal infections of the mouth caused by the overgrowth of a fungus such as Candida albicans, result in the appearance of plaques in the mouth and induce certain symptoms such as discomfort, irritation and inflammation of the tongue and gums, slight bleeding when brushing teeth and discomfort when chewing. This condition is known as oral candidiasis and requires treatment based on antifungal medications.

The lack of certain nutrients in the diet such as vitamin C or iron is another possible factor that can affect the gums health, causing inflammation and irritation. Also, this causes generalized malaise and weakness, anemia and cutaneous hemorrhages.

Carrying braces increases the risk that the gums will become inflamed because it is difficult to clean the teeth properly. Moreover, the swelling can result in a normal reaction of the gums when perceiving the devices as a danger. Poorly made fillings, improperly placed crowns or other dental appliances that have not been adjusted as they should also promote inflammation and redness of the gums.

Hormonal changes that are experienced in certain stages such as puberty, during the menstrual cycle, pregnancy or menopause can lead to gums inflammation. In these specific phases the gingival tissue is more sensitive than normal and is doubly affected in the presence of tartar and toxic substances.

7) Sensitivity to toothpaste or mouthwash

Some component of the paste or dental rinse is not beneficial to the health of a person’s gums, causes inflammation and irritation in these tissues. When this happens, it is advisable to consult with the dentist and start using another product that is smoother and adapted to the degree of sensitivity of the patient.

The suffering of some systemic diseases like diabetes, AIDS or leukemia causes injuries in the oral cavity and gums inflammation. In fact, gingivitis and periodontitis are two of the most common oral conditions in patients with weakened immune systems.

Due to the great diversity of factors that can cause inflammation of the gums, it should be treated according to the cause in a specific way. It is recommended to go to the dentist so as to evaluat the intensity of the problem. The particular diagnosis is essential to be able to solve the problem definitively.

Generally, to treat swollen gums you should reduce those bacteria that cause swelling. When the problem is only limited to the gums, the dentist will perform a professional dental hygiene to eliminate bacterial bale and accumulated tartar. It is advisable to perform a professional dental cleaning once a year or every six months in case you have sensitive gums and are prone to inflammation or irritation.

In cases of advanced periodontitis, surgical intervention may be required to open and clean deep deposits of plaque and to strengthen those teeth that have loosened.

You can take some anti-inflammatory medication to accelerate the reduction of inflammation and reduce discomfort.

Likewise, it is fundamental to maximize oral hygiene measures at home and to acquire habits such as:

In case the gums become inflamed due to the taking of a particular medication, you should consult your doctor immediately to assess the possibility of changing that type of drug.

Use Natures Smile Gum balm for gums inflammation treatment, this product has 100% herbal extracts such as Oak, Silver Fir, Chamomile, Yarrow, Greater Celandine and Nettle. Natures smile receding gum paste goes deep into the gum pockets and wipe out all bad bacteria that induce gum problems and inflammation. Naturessmile receding gum paste is 100% natural and has no side effects to use. It also comes in money back guarantee.

CarolynLowman is author at LeraBlog. The author's views are entirely their own and may not reflect the views and opinions of LeraBlog staff.