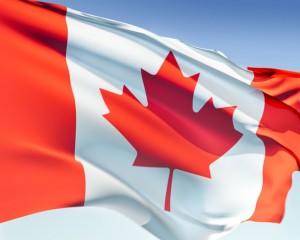 Most of the time you hear of a success story from the United States, you’ll hear someone saying those famed words how America is a "land of endless opportunity".

Even Alicia Keys sang about it, saying New York is a "concrete jungle where dreams are made of", and when talking about success, it's hard not to mention some of the greatest Americans to have lived in the modern world, such as Microsoft's former CEO Bill Gates, Apple's founder, the late Steve Jobs, or the current American presidential candidate and business mogul, Donald Trump.

But on the other side of the country's northern border is Canada, a country usually known for maple syrup and people saying "eh" all the time. It's a country known for its peaceful existence, where people go to protests wearing signs like "I am a little bit upset", and where security services guarding such events have close to no work at all.

The land of opportunity

An average Canadian's income for 2013 (latest numbers) is 76,550 CAD, a number which has also seen steady growth over the years. Just in 2009, that number was at 68,410 CAD, according to a government page covering the country's statistics.

According to Canadian Business, Mining & Forestry Manager and Oil & Gas Drilling Supervisor are both well-paying and high-in-demand jobs. There are also a couple of other jobs which are common to most of the developed world, including mobile applications developer, user experience designer and marketing manager. Corporate trainer and translator are also in demand, especially as Canada is a multi-lingual country.

It is also important to add that Canada is an extremely beautiful country, with many tourist attractions, historic sites and stunning nature, making it ideal for family life as well. The Niagara Falls, Banff National Park and the Rocky Mountains, Toronto's CN Tower or Old Quebec are just some of the country's landmarks which everyone should visit in their lifetime.

Benefits of being a Canadian citizen

Most certainly, you can go to Canada to live and work, but if you are there and have no plans on moving away from the country, you should consider getting a citizenship, as there are many benefits Canadian citizens have over expats. Free healthcare is only one of those, but it is very important, which is why it is the only one mentioned in this article. There is also a test you have to pass, and it would be wise to prepare for it first. Here is a citizenship test site where you can go and practice for your test.

To apply for citizenship, you must be a permanent resident and be 18 years of age or older. To qualify you must: have, since becoming a permanent resident, been physically present in Canada for at least 1460 days in the six (6) years immediately before you apply.