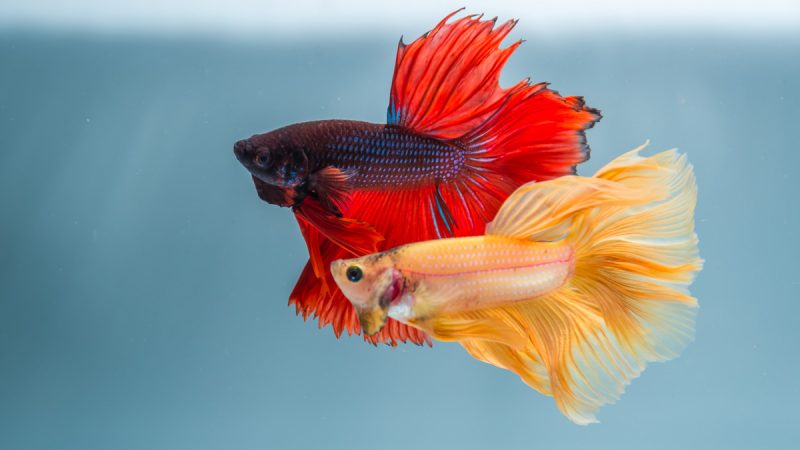 A family that wants a pet that’s easy to take care of but endlessly fascinating as well as stunningly beautiful should look no further than the betta fish. Once called the Siamese fighting fish, the males of this species are famous for their fanlike fins and jewel-like colors.

Fun Fact: Betta fish are found in small ponds throughout Southeast Asia naturally. Many of these ponds don’t have any inlet’s our outlets (like a river or stream running through them), which begs the question: how did fish get in there naturally? The answer is that birds that hunt betta fish sometimes drop them (or their eggs) as they are flying, leading to the natural expansion of the species.

What’s the Best Environment for the Betta?

Betta fish like temperatures that are between 77 and 86 degrees Fahrenheit. They prefer the water to be a little warmer if the owner is thinking of breeding them. The pH of the water and the water’s hardness don’t matter, though the water shouldn’t be too hard, too alkaline or too acidic. The fish prefers moderate to bright but not glaring light and a good amount of vegetation.

The water level shouldn’t be to the top of the bowl, and the bottom of the tank should be soft, with a layer of humus. A good idea is to place floating plants in the tank or keep the tank covered as these fish have been known to jump out. Another option is to get a larger size tank and not fill it all the way up, which will make the jumping distance significantly higher for it to be able to accidentally jump out of the bowl or tank.

Betta fish are freshwater fish, which are much easier to take care of (and require much less equipment – just a simple tank or bowl). They don’t even need a tank with a water filter, as long as you clean the bowl weekly (or when it starts to turn green).

The betta fish does well with dried food but does even better when given live food. This includes brine shrimp, daphnia, tiny crustaceans, worms such as Tubifex, snails and other animals and plants that are found in plankton. However, in the context of looking for an easy pet to take care of, most people use a simple dry fish formula that they sprinkle in their fish bowl once every day or two.

Can Bettas Be Kept Together?

Bettas cannot be kept together. The males are very territorial and aggressive and if two are put in the same tank they’ll fight to the death. They are even aggressive towards the mothers of their children if they are kept in the tank with them too long. However, it is possible to add additional sfish in the same tank as a betta fish, as long as the tank is big enough and it’s one of the fish a betta fish can live with.

Betta reproduction is another fascinating thing about them. The male incubates the eggs in a bubble nest that he makes among the plants in his tank. These are simply air bubbles that support the eggs. When a female is placed in his tank, he’ll mate with her, and as she releases her eggs, he will pick them up in his mouth, and place each in a bubble. When the female is finished laying her eggs she needs to be removed or the male will attack her.

The eggs hatch after about 24 to 30 hours, and after that the owner needs to either remove the male or place a small box inside the larger tank that the fry can escape to. After about three days, the male’s parental instincts fade, and he sees his own offspring as food.

This sounds a bit savage, but the betta fish is absolutely harmless to humans. They live three to five years, and during that time they are a source of joy and wonder. There are even a number of tricks a betta fish can perform, and they are even known to be able to recognize their owners! In my family, our betta fish is a family pet. The children take turns feeding him, playing with him, and even help wash his tank out once a week!