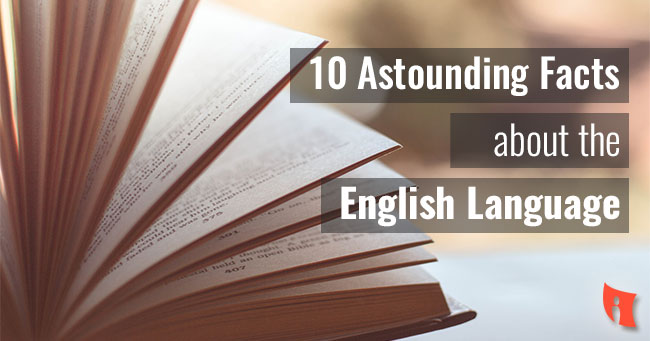 The English language, a wonderful blend of inventions and borrowings is the greatest language in the world.

The English language is quite varied and has an ever-changing vocabulary. New words get added to it every now and then.

The Oxford English Dictionary gets updated four times every year and the March 2016 update of this dictionary added five hundred new phrases, words and senses.

Read on to check out on some amazing facts of the English language.

English is a universal language. English can be understood everywhere by the scholars and the educated people and it is the world media language.

It is the official language of the sky as well. The international language of aviation, the air traffic controllers as well as flight crew members must be able to communicate in this language.

Do you know what is the most commonly used letter in English?

â€˜E' is the most commonly used letter in English.

Can you guess the least common letter to start a word in the English alphabet? Its 'Z'.

Anybody has any idea of the second least commonly used letter in English alphabet to start a word? It's none other than â€˜Q'. It is actually close behind â€˜Z'. In every 510, only 1 letter is a Q in written English.

What sentence uses all the 26 letters of the alphabet?

"The quick brown fox jumps over the lazy dog."

Check it out. It has all the letters used in the English alphabet.

Can you think of any other sentence?

Which word has 5 vowels in a row?

How about using this word while you play hangman?

There are several words in English language that changed its meaning through years.

Do you know what was the original meaning of â€˜nice'? It meant â€˜simple' or â€˜ignorant'.

â€˜Silly' also underwent a complete change in the meaning. Earlier, it was used for referring to things that were blessed or worthy.

How about â€˜fantastic'? Till the 14th century, it referred to the things that existed only in imagination. The meaning â€˜marvelous or fantastic' came only in the 1930s.

The English language plays with words in creative ways and in the process, leads to the development of a really fascinating language.

What are the longest words in the Oxford English Dictionary?

Confused? Ok, let me tell you the meaning of this word. It is a type of lung disease that is caused by inhaling dust and ash.

Want to know some other longest words?

Don't worry yourself out. You will not be required to use these frightening words. These are not much in usage.

Did you know that one of the oldest words in the English language that is still in use is town?

There are words in the English language dating back to more than thousand years. The words like â€˜we', â€˜I', â€˜five', â€˜two' and â€˜three' are believed to be in use since the Stone Age and have not changed much since that time.

Did you know that no other words in the English language would rhyme perfectly with â€˜orange', â€˜purple' or â€˜silver'?

Try hard. You won't be able to find them probably since there are no such rhyming words in the English language.

What if I tell you that there are several ghost words in the English language? Don't be afraid. These are words that appeared in the dictionary owing to printing errors and don't mean anything.

Once published authoritatively, these words are copied widely and take a long time to be erased from usage.

â€˜Dord', is a ghost word. It appeared in the dictionary for a few years in the mid-20th century.

Do you have any idea of the longest one-syllable word in the English language?

The one that is most commonly cited is screeched. There are several other words like scratched, schlepped and scrunched.

With a rich history, the English language is one of the most dynamic of all languages and it is growing every day. More words are being added to it with the boom in internet technology.

Which fact intrigued you most of these? Do let us know your opinion.

Javed Muhammad is author at LeraBlog. The author's views are entirely their own and may not reflect the views and opinions of LeraBlog staff.