For those of a certain age the Casio brand is synonymous with calculators. Back in my school days the only piece of technical wizardry available was indeed a calculator and it was a must have feature of all school bags. The calculators were invariably Casio and at the time they seemed like affordable little marvels. My parents were sceptical about the wisdom of such gadgetry in the classroom. I think they believed that we should all be using mental arithmetic or an abacus! But those were the days of Bakelite phones and black and white televisions. These days a calculator would be the least of their worries!

Casio have been in the forefront of technological innovation since the 1950’s but the company’s success was not founded on electronics. Casio was first established in 1946 by engineer Tadao Kashio and the first product was the yubiwa pipe, a ring for the finger that held a cigarette. This might seem like a strange contraption but it enabled cigarettes to be smoked down to the nub. Japan was economically challenged in the wake of World War II and so cigarettes were a valuable commodity. The ring was a great success. 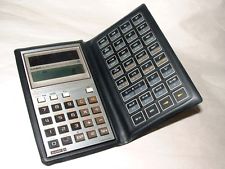 In 1949 Kashio used the profits from the yuwiba pipe to develop calculators having seen electric models at a Tokyo business show. At the time the majority of calculators were primitive affairs which used a crank or a motor but Kashio saw the potential of the electric machine and set about producing a model using solenoids. The first Casio desktop design was completed in 1954 and was a strikingly simple but effective piece of equipment destined for success. Casio went on to produce the World’s first compact all electric calculator with models becoming ever more affordable. By the time I reached secondary school in 1974 almost everybody had a Casio on hand for their maths lessons and the 1980’s saw Casio produce solar powered calculators for the first time. 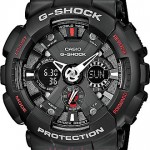 The Company diversified over the years moving into electronic keyboards, yes I had one of those as well, cameras, cash registers and watches. The G-Shock watch was the first shock resistant timepiece and by 2009 50 million units had been sold. It has to be said that for a long time Casio watches focussed on new technology and functionality at the expense of style and became a bit of a byword for cheap. As with its instruments and calculators Casio brought electronics to the masses with affordable prices. The G-Shock, however, was a winner and has constantly evolved retaining its popularity. The watch is now worn by Bear Grylls on his many TV adventures.

It is strange to think that an electronics giant could have started out with the invention of something as simple as a cigarette holder but that early creation showed a flair for dreaming up affordable devices which has continued ever since. Elegance may not be the first word on your lips when you think of Casio but that isn’t the point. For 70 years the company has been producing the equipment that people need to make life easier and at prices they can afford. You can’t say fairer than that!

Sally Stacey is a keen writer with an interest in timpieces and technology.