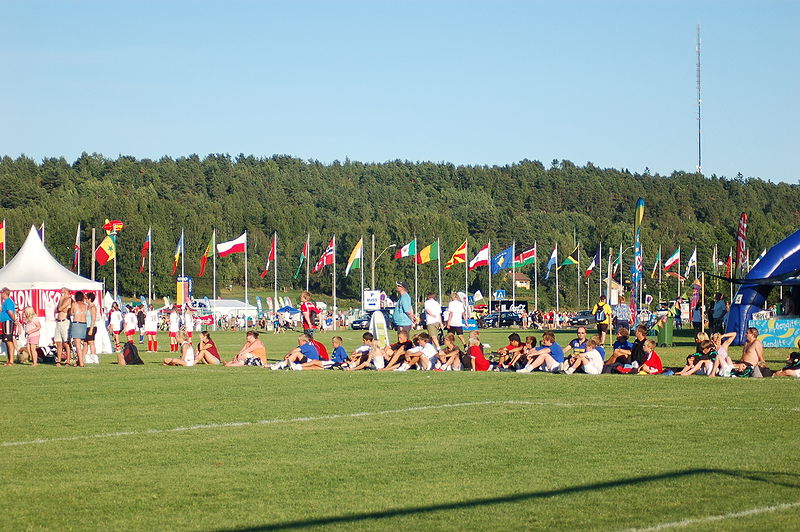 We all know the big boys get all the glory in football – well, nine times out of ten they do. Tournaments like the World Cup, Premier League, Champions League and Euros may be the most lucrative and widely broadcast tournaments, but that doesn’t mean they’re the “biggest”.

Running every year bar one since 1972, the Norway Cup is more like a football festival – and the whole world is invited.

Held on the green expanse of Ekebergsletta in Oslo, the week-long 2016 tournament broke new ground with 2,199 teams competing over the course of 6,000 games – all aimed at crowning the best youth outfits in the world.

From hosting 10-19-year-old footballers, the cup has expanded to include three-a-side football so those from the age of six can join in the fun.

So not only is it the world’s largest youth football tournament, it’s already got more than three decades of history behind it. In fact, the only reason it probably doesn’t get more coverage is the work it would take to cover the 6,000 games taking place in one week!

It’s certainly not because it doesn’t deserve it. There are great stories of success and even the occasional bit of controversy to keep things interesting during the brief interludes between games: this year, the Russian team were thrown out after its players were said to have “gone berserk” on the field, violently attacking their rivals.

2) The Gothia Cup – otherwise known as The World Youth Cup

So Norway has the biggest youth football tournament but did you know it has a neighbourly rival called the World Youth Cup?

The Gothia Cup in Sweden runs every July and caps its entry at 1,600 teams – be them school teams based either locally or abroad. It started back in 1975 – yet that first tournament included girls’ teams; a huge success and far from the norm.

Over the years, more than a million – yes, a million! – players from 141 countries have participated. It’s well worth watching too: in an “average” year more than 22,000 goals are scored, more than five per match!

If you didn’t catch it this year on TV, head over to the website. It carries its own live coverage for a subscription charge – but you can’t help feel it deserves a bit more. Especially that opening ceremony.

Conifa – the acronym – sounds like one of the fir trees you might expect to see in Sweden – where its first “world football cup” was held in June 2014, in Ostersund. But it stands for the Confederation of Independent Football Associations – also known as a different world for the beautiful game to thrive, and the result is something quite remarkable.

Conifa puts on its tournament for a veritable feast of states and stateless people, regions and minorities unaffiliated with Fifa such as Greenland, Tibet and Western Armenia – Conifa gives them a chance to show the world exactly what they can do.

“Our main goal is to give football outsiders overseen by Fifa or left behind by their mother country’s FA the chance to win their place on a global stage and advance, football-wise and personally,” said Conifa general secretary Sascha Düerkop.

It’s more than a noble cause. It’s essential. And it’s competitive. Occitania top the current rankings from Panjab and Northern Cyprus – yet it was hosts Abkhazia who won the 2016 tournament in June. The Conifa World Football Cup feels like it’s about something more than just glory hunting – a stark contrast to Fifa’s World Cup.

It’s growing in popularity too with four new members joining in 2016. Two from Africa: Western Sahara and Matabeleland, and two from Europe, Délvidék and Karpatalya.

4) The Gulf Cup of Nations

Sure, the Euros and Copa America fire up football imaginations across the world – the best nations in Europe and South American respectively doing football battle on an epic stage. But there is something captivating about a little-covered equivalent in the Gulf.

Also known as the Arabian Gulf Cup, the four-yearly tournament is not sanctioned by Fifa – which probably adds to the charm, as some of the world’s wealthiest states thrash it out on the pitch.

On the calendar since 1970, Kuwait is by some way the most successful nation with 10 titles – not bad for a country with a population of approaching 4,000,000. Saudi Arabia, for contrast, is second place with three titles to their name.

It’s Qatar’s turn in 2017 – five years before the state will host the Fifa World Cup. The eyes of the world should be on how they perform and with improving TV coverage in recent years, it may be the world is about to experience more of the Arabian Gulf Cup.