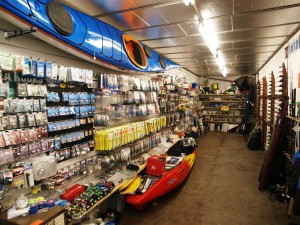 Time was that the local fishing shop was a social hub and a venue to meet up for anglers as well as the best place to buy their tackle and bait. Despite their social role, however, many shops have struggled to survive and now questions are being asked regarding the future of the industry. Some outlets continue to thrive whilst others are in serious decline so what distinguishes the winners from the losers and how many retailers will prosper in the future?

Several factors have contributed to the decline of many of the nation's tackle shops. Clearly the Internet has been the greatest of these. In common with other independent retailers the little guy has found it hard to compete with the convenience of purchasing online and the competitive pricing. Searching online opens up a new world of opportunities for the angler with a vast range of products that his local supplier would not have the room, the finances or the foot fall to support. Once the world of choice has been opened up there is no turning back leaving small businesses with dwindling custom.

The growing problems for fishing retailers were exacerbated by the financial crisis which severely affected disposable incomes. In harsh economic times non essentials are usually the first things to be axed and so it was. The situation was made still worse by the severe winter of 2010 when even the hardiest of souls found themselves confined to home for long periods and the opportunities to fish were limited. Many shops reported a truly terrible period of trading which drove some to the brink of extinction.

The role of commercial fishing sites should not be underestimated either. Many such destinations feature on site tackle and bait shops. Inevitably the convenience of these operations to the visitor, including the shops, has drained custom from the high street.

There is anecdotal evidence to suggest that retailers could be fighting for a slice of a smaller cake in the future. Some anglers are commenting that fewer youngsters are coming into the sport meaning less active anglers in the coming years. There certainly seem to be fewer young people leading active lives generally with more and more devoting their time to electronic gadgetry.

The Size of the cake

Fishing equipment is still a half a billion pound industry in the UK and so their remains plenty to play for. Is there a future for the retailers or will anglers be buying everything they need from Amazon in the years to come? Whilst the internet has killed many slow adopters it is the lifeblood of the successful operations who have embraced online sales. There are success stories out there and the common factors appear to be a strong online presence and a comprehensive range for customers to choose from.

Take Gerry's Fishing. This was a fishing retailer in Morecambe with humble beginnings which began trading from a tiny shop but through excellent service, effective marketing and reinvestment in stock the operation just grew and grew. The wide product range has been partnered by a strong internet presence boosted by significant investment in the website and search engine optimisation. The majority of Gerry's Fishing sales are now made online and the company boasts customers worldwide.

It looks like the winners in the battle to survive will be the operations which embrace the internet and which offer a broad range of stock. The online consumer wants a suitable breadth of choice in other words a one stop shop and they demand competitive pricing to go with it. The days of the small local store are probably numbered and the future will almost certainly be one with fewer but larger operations. As size may prove to be a key to success it may also be the case that diversification is in order but this is hard for independent retailers to finance. The larger premises, increased staffing levels and greater investment in stock are a big risk and beyond the scope of many retailers. Such investment is probably unnecessary for successful trading online however in terms of face to face retailing this tactic could be the path to salvation.

I only say this because of my personal experience with one retailer in America. Bass Pro have a string of admittedly enormous outlets in the US which offer a startling array of equipment and clothing for all outdoor pursuits. The shops feature fishing tackle, guns, camping equipment, climbing gear, boats and quad bikes indeed just about anything an outdoor enthusiast could want. Their shops are almost like tourist attractions which are worth a visit just for the experience. But here's the thing. You may enter Bass Pro purely out of curiosity and to have a nose around but it is almost impossible to leave without buying something. I have never managed the great escape!

The lifestyle shopping experience is the way forward for those who are not satisfied with merely an online presence. Such a business could be achieved by several specialist retailers joining forces. If they are struggling to survive in their own field a joint venture could drive greater foot fall to their door.

Retailers of fishing gear will be a rarer species in the years to some. Those who survive may do so only online with some larger enterprises retaining a high street presence. Even these outlets may struggle without diversification. I think that Bass Pro may have shown retailers the way forward but we will see.

Sally Stacey is a keen writer and lover of the great outdoors with an interest in the future of independent retailers.

Sally Stacey is author at LeraBlog. The author's views are entirely their own and may not reflect the views and opinions of LeraBlog staff.