Chromatography belongs to that family of inventions that really changed the world but few people know it. Some people may guess with the etymology that it basically means "the writing of colors", from the ancient Greek chroma that means color and graphein that means writing. But very of them can really explain what chromatography is and why that scientific technique is so important for the modern world.

The purpose of chromatography columns

Chromatography allows us to separate the different molecules from a compound so that we can analyze or identify them easily. In fact in people's mind scientific can analyze anything just with a microscope. It is true that you can precisely analyze substances and molecules with a microscope but chromatography columns like HPLC have in fact a different purpose than microscopes. The shortcoming of the microscope lies in the fact that it is too precise and sometimes you just don't need to scrutinize a molecule form or its behavior, you just want to know which types of molecules a compound features and how much you can find in it. And with a microscope it can take a huge amount of time and you may miss something important. Chromatography allows scientists to take some distance and see the general organization of a compound. Even if most of the time you'll find liquid chromatography in labs with mainly HPLC columns, this technique can also be applied to gas. The principle is quite simple: you send a liquid in a tube (usually called High Performance Chromatography Column) and after a while the different molecules inside the compound will separate because they all move at a different pace inside the tube. There is a static phase in the tube in because of that static phase the different molecules move at a different pace, some of them are slowed down by the presence of that static phase and some of them are less attracted.

A short history of chromatography 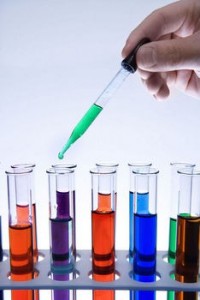 The very first sign of chromatography as a scientific technique come from the XIXth century in Germany about 1820. The very first appearance of chromatography deals with paper. The German chemist Runge dropped chemical compounds on paper strips and noticed that after a while some colors started appearing. What was very astonishing for the chemist was that the colors showed up in groups, almost lines and that each time he dropped the same substance the colors and the forms were roughly the same. He was very smart because he suggested the technique was used for authenticate official documents and bills. His idea was that it was impossible to reproduce the same graphics if you were not able to reproduce the same solution and the same condition. But people at that time did not really take his idea seriously. So for Runge chromatography remained a simple hobby and above all a visual entertainment that he used to share with his friends and trough graphic books. We had to wait 75 years to see a new scientist making a breakthrough in that field. It was the Russian botanist Tswett who used for the first a column to analyze the pigments of one of his compound by putting an adsorbent in the tube. The technique was very efficient though modern HPLC columns are far more complex and precise. But the principle is the same, and a pump slowly sends the liquid into the tube as an analyzer is now also put at the exit of the tube. The technic was supposed to be called "Tswettography" but we didn't keep that name because Tswett means color in Russian! And chromatography is also able to separate and identify colorless molecules. It took time to spread Tswett's discovering, mainly because he only published in Russian, and chromatography and HPLC columns quickly became famous from the 1930s and the 1950s with a Nobel Prize linked to chromatography.