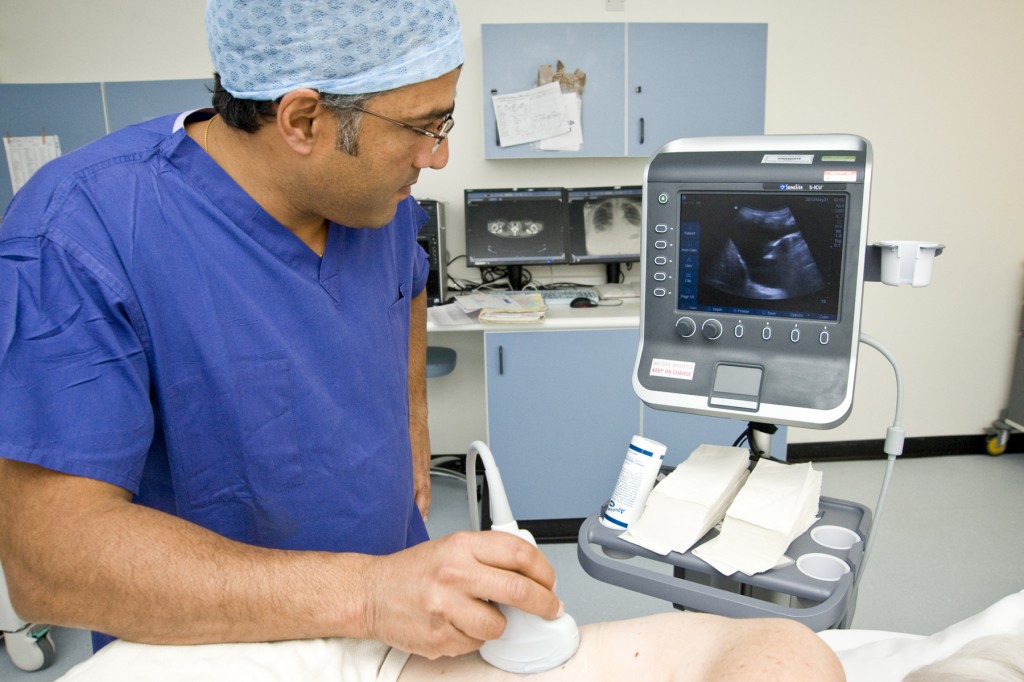 Anyone with a history of a life-threatening illness can tell you that diagnosis is key for timely, proper treatment. Historically, using invasive procedures for diagnosis could leave a patient in a worse condition than they were in to begin with, and if their situation was dire, it could even mean death. Medical imaging has allowed us to diagnose and assess injuries and diseases non-invasively, and with more precision than ever. Unfortunately, the technology that allows us to do so is often bulky, and relegated to its own very specific area in the hospital. With only tactile information to rely in, it can be difficult for doctors to give precise diagnoses in the emergency room, which can delay treatment until an imaging machine is available or the patient is able to be moved. Thanks to development of portable ultrasound machines, more accurate diagnosis can be made right there in the emergency room, with the potential to provide doctors with the opportunity to intervene immediately to provide care in life-threatening situations.

Diagnostic sonography was first used in the late 1940s by a World War II surgeon to assess bowel injuries incurred by his patients from bomb explosions. John Wild, the "Father of Ultrasound", had heard of the technology being used to detect small fractures in tank armor, and was able to use it to identify the thickness of a patient's intestine without the need for surgery.

Technology at your fingertips

All medical imaging technology has come a long way since then because of its non-invasive nature, but the market for portable ultrasound technology has especially increased because of its mobility. The development of imaging chips has advanced enough in recent years so that users are no longer sacrificing quality of image for smaller models. These types of machines come in all shapes and forms now, from hand-held and pocket-carried devices to cart-based machines that can be easily rolled across a patient's room or down the hall. Additionally, ultrasound does not involve the application of radiation like x-ray machines and computed tomography scanners do, so it remains a popularly safe choice.

Many of us are familiar with the use of ultrasound in obstetrics and cardiac, but the very same technology is often used in other areas of medicine as well. Anesthesia teams can use sonography to monitor the status of fluids in the body, such as volume of urine in the bladder or the presence of pericardial fluid when assessing a trauma. It can even be used in ophthalmology during the initial clinical work-up, and in post-treatment assessment.

Another huge benefit of portable ultrasound machines is the cost savings associated with these smaller models. Thanks to smaller, more advanced imaging chips, machines are being used in a wider variety of circumstances, and can also be as little as one-third of the cost of the larger, non-portable models. This cuts down on hospitals' expenses and the expense of responding to large-scale trauma situations, which allows for those financial resources to be allocated somewhere else that they are needed.

As portable ultrasound technology has continued to develop over the years, it has proven to be extremely useful in the rural United States and in developing countries. There was a time when ultrasound diagnostics could only be performed by bulky machines in the hospital setting, which could pose problems for patients who did not have easy access to hospitals. Developing areas could benefit hugely from a low-cost, lightweight imaging solution for obstetrics, where mortality rates are extremely high for pregnant mothers and newborns. Organizations such as RAD-AID recognize this need, and work to increase the imaging services available in regions where they are so desperately needed.

Portable ultrasound systems are especially useful in large-scale trauma situations. When the 2010 Haiti earthquake highlighted shortcomings in emergency response efforts, International Medical Corps made an effort to train first responders and medical personnel, and contributed emergency ultrasound equipment to help cut down on response time for critical patients in a future mass-casualty situation. Developing countries are not the only places where ultrasound is being incorporated into medical training. University medical programs in U.S. and across the world are now educating their medical-school students on the operation of these machines so that providers will not require a specially-trained sonographer for their use.

The Future of Ultrasound

Understandably, the market for portable ultrasound machines has expanded significantly over the last few years. DiagnosicImaging.com reported that in 2010, sales for these types of products had increased by 21%. Those numbers reflect a variety of types of portable units, and it is clear that all major brands are competing to deliver machines that will stand up in the portable market. Ultrasound equipment suppliers such as Imaging Associates have begun carrying portable ultrasound systems from all major brands such as Sony, GE, SonoSite, and Phillips, and if the projected sales numbers are any indication, the market will only continue to grow.

Published on behalf of Mr. Eddie Harmon. He blogs on many topics at Medical Equipment and Service Review, and is particuarly interested in researching and writing about advancements in medical technology.