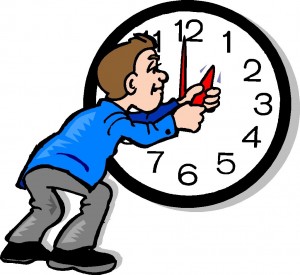 For most of us, time isn't really something to think about. Time is what we see when glance at our wrist watches on the way to a meeting or when we're reminded of our cuckoo clocks' song each hour, but time is much more complex and fickle than you think. Theories about time abound, so here are just a handful that may blow your mind.

1. The higher you are, the faster you age.

There's this understanding that, even if we're in different time zones, a minute still lasts 60 seconds, a second is still 1000 milliseconds. However, according to an experiment, time is not the same everywhere. To be specific, changes in elevation can change the progress of time.

In the experiment, scientists placed two identical atomic clocksâ€”the most precise clocks ever madeâ€”on two tables and then raised one of the tables 33 centimeters. These two clocks were initially in sync, but after raising one of the tables, the higher clock actually ran faster by 90-billionths of a second over the course of 79 years.

That might not seem like a huge difference, but extrapolate the centimeters to miles and you'll find that people who live at higher elevations age slightly faster than those at sea level. This is known as time dilation, occurring because gravity affects space and time. The closer you are to Earth, the slower time moves. The farther you are from Earth, and thus its center of gravity, the faster time moves.

It's a pretty insignificant amount for humans, but it does matter when it comes to GPS satellites, which run about 38 microseconds per day faster. Not making up for the difference would mean many frustrating road trips with your GPS.

2. The faster you are, the slower time is.

According to Einstein, for an object traveling at the speed of light, time essentially stops. It's another example of time dilation, and it happens to youâ€”albeit on a much smaller scaleâ€”every single day. Using those crazy accurate atomic clocks, scientists had one travel about 20 miles per hour. At that speed, the clock slowed down at a fractional frequency of 6 Ã— 10â€“16 or about 0.0000000000000001 percent.

Another experiment took the same idea an even greater distance, replacing the 20 mph car with a full plane. After its 800-kilometer, 50-hour trip, the traveling clock slowed down by 230 nanoseconds. It gained time from being above the Earth but it lost so much more by traveling at a faster speed.

Let's say you were the one in the plane, traveling at great speeds, miles over the Earth. Although time would slow down and speed up accordingly, you wouldn't actually feel any of it. Only someone outside the plane would.

And that takes us to the next idea: we all experience time differently. There have been various studies to prove the relativity of brain time, but really if you've been in an especially boring, uncomfortable conversation, you know that a few minutes on a clock feels like an hour to you. Things like mental disorders, drugs, age, and a ton of other factors all affect your perception of time, so that five minutes to you won't feel like five minutes to the guy standing next to you.

But hey, we can at least rest assured knowing that time will last forever, right? Not according to some scientists. If you assume that space and time are infinite then everything has the same infinite probability, so time definitely has to have an end or else the very fabric of reality would be ripped in two.

At the end of time, things wouldn't explode or blink out into nothingness. We would be frozen in place, completely unaware of everything. We wouldn't rot or fall over our chairs. Everything would just stop.

Time is just one of things we can't control, so let's try to make the most of what we have.