In the past it was generally accepted that some children would fair better than others at school. Thankfully this attitude is now seen as unacceptable, and rightly so. The government scheme â€˜Every Child Matters' believes that no child should be overlooked and every child should leave school with a certain level of education. School inspections and national league tables have all been implemented with this end goal in sight. Parents now have an expectation that schools will do everything they can to reach out to their child if they are finding it hard to learn and teaching methods have evolved hugely from â€˜chalk and talk' to encompass so many ways of getting a lesson across that there are rarely any children left out. There is also an expectation from society that our schools will not fail any children.

It is common knowledge that there is a huge amount of disparity between the abilities of children entering school at Reception age. As an example, even at a village school with a small Reception intake of ten children, Reception teachers often report having to write at least four lesson plans per day for that year group alone in order to meet all the differing abilities. With the National Curriculum stating that all children should be stretched at school, it is often the unenviable task of teachers to tailor a lesson to children in such a way that higher ability children are challenged whilst lower ability children do not feel overwhelmed. 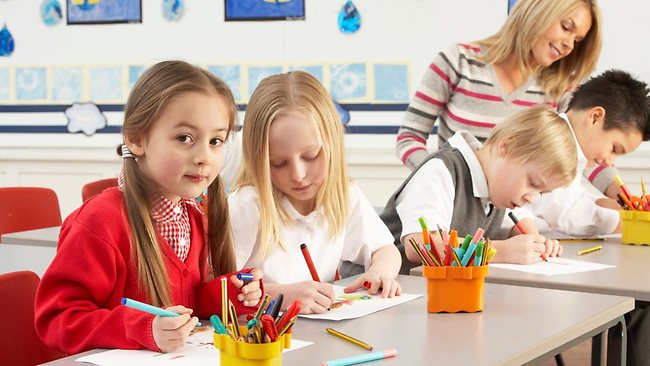 As we near the end of the 2013 Reception intake's first year at school, let's take a look at the progress of Reception children and how it varies from child to child. What methods do teachers of Reception children employ to encourage settling in the school environment and meet the needs of every child? And whose responsibility is it to prepare children sufficiently for starting school?

Part of assessing the situation in Reception is recognition of the broad spectrum of areas the children are expected to develop in. The key areas in the EYFS (Early Years Foundation Stage) framework are:

Children are assessed on entry to Reception and then throughout the school year at regular intervals to make sure they are progressing. The assessments are based on expectations for an age group, which are divided into 30-50 months, 40-60 months and finally the Early Learning Goals, which are used at the end of the Reception year, and children are either deemed to be â€˜emerging', â€˜developing' or â€˜secure' in a specific area for their age group. For example, on entry to Reception all children are expected to be either emerging or developing in the 40-60 months section across the Prime and Specific Areas.

It is important to note that parents, teachers, head teachers, Ofsted inspectors and anyone else should be looking past the assessments that have been made at a specific stage to the progress made between stages. All children will be different, it is common knowledge that summer-born children are statistically disadvantaged to their autumn-born peers, so it is therefore vital to see what progress has been made term by term at school. Individual reports that show little progress can often be explained by various external, physical or psychological factors, whereas low progress across a whole year group will trigger concern from head teachers and may alert inspectors.

Simply by talking to two Reception teachers it became immediately clear that there are no hard and fast rules when it comes to this age group. They explained that some children coming in with a lower ability flourish in the school environment in Reception year, making huge amounts of progress, but then may plateau the following year as they settle down to school life, which may lose some of its â€˜novelty value' after the first year. Other children of lower ability may continue with steady progress, needing extra help from intervention groups to work their way through the expected levels at school. Children of higher ability may show lots of promise on entering school, but may find it hard to settle in the school environment and their progress could be slower than expected. Whereas other children of high ability may flourish and race ahead in an environment that challenges and stretches them further.

Teachers and teaching assistants employ a huge range of methods to encourage and inspire learning in pupils. They recognise that many children learn kinesthetically; by being actively involved in a subject, rather than sitting, watching and listening. These alternative methods could involve using ICT or an interactive whiteboard, fun activities and games, outdoor lessons, developing practical skills such as cooking and crafts, exploring their local neighbourhood or making use of the wide range of learning aids that are available to schools.

The teachers I spoke to said that they will "do just about anything" to help a child learn and explained that they make use of a wide range of educational products that are at their disposal. Bean bag manufacturers have recently moved into producing educational products as well as their popular bean bag seats for schools and have been pleasantly surprised by their popularity. The products make learning fun, whilst at the same time being tactile and particularly helpful for kinesthetic learners. They also reflect curriculum themes and can be incorporated into a wide range of subjects and topics. 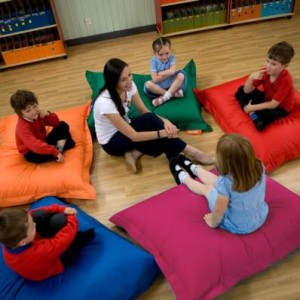 A large two seater oval pod can be adapted with different covers to show varying educational designs around the sides; a number train, the alphabet, nature themes with labels to name just a few. Fun BazZoo animal-shaped bean bag seats make great seating for libraries and can be used when decorating classrooms to a chosen theme. Farmyard animals, sea creatures, safari animals and minibeasts all reflect different curriculum subjects and topics. Highly tactile bean bags can be particularly useful in sensory rooms and as seating for children with special educational needs.

It is also important to bridge the gap between the more relaxed environments of home and nursery and the more organized environment of the school classroom. To this end, a Reception classroom is likely to be laid out in a more informal manner than classrooms higher up the school, with areas to encourage role playing such as a home corner or topic area, sand and water tables or reading areas with comfortable bean bags. The school day will be split up into shorter lessons so that children are moving from one activity or lesson to another before their attention span is under too much strain. As the end of the first year approaches it would be expected that most children would have adapted to the more organized school environment and would be ready for the longer lessons and higher concentration levels needed higher up the school.

When it comes to debating whose responsibility it is to ensure children are sufficiently prepared for school, the two camps tend to be either nursery or parents. In the past the majority of children would spend time at home with their mother before starting school, with perhaps a small taster of school life in the form of a few hours per week spent at playschool, and the minority attended daycare or were cared for by relatives if both their parents worked. Now most children have some experience of attending nursery education before they start school, with the Government offering fifteen free hours to all children from the term after they turn three. There are increasingly higher numbers of families where both parents work or single parent families where the parent works long hours so more children spend time in childcare from a younger age. With new initiatives to offer nursery hours to more children from age two, the amount of children attending nursery will increase even more, so it stands to reason that nurseries should shoulder some of the responsibility for preparing children for their entry to mainstream education.

Undoubtedly, most responsibility however should fall to parents to make sure that their children are as ready for school as their natural ability and age allows, without putting their child under any pressure of course. But with many parents believing that it is the responsibility of nursery to prepare their child for school-and expecting school to pick up the slack once children enter Reception, is it any wonder that children are entering school woefully ill-prepared? Teachers report that Reception children are often unable to hold a pencil, write their name, use the toilet hygienically, handle cutlery at mealtimes or dress and undress for PE lessons. Preparation for school should be across all of the EYFS areas as stated above, encouraging development in communication skills, basic literacy and numeracy, as well as the life skills mentioned above, to ensure a smooth transition to school life that gives them the best chance of getting the most out of education.

It seems obvious that parents should want their child to be as well prepared for school as possible to give them a good start in Reception and a strong likelihood of making good progress not just in their first year, but setting standards to continue throughout their school life. In a similar way, parents and schools can work together to make the transition from Primary to Secondary and then the move out of school into further education or the big wide world as smooth as possible too.

By Andy Atkins
This article was written by Helen McGonigal and edited by Andy Atkins. Helen is a Primary School Governor with responsibility for curriculum development, as well as being a professional writer of childrens literature.