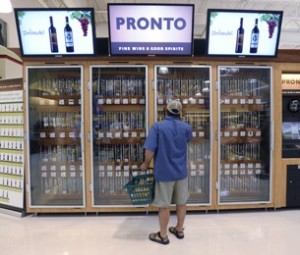 Since the very first one was developed, all the way back in the late 1970s at the University of Illinois, the humble self-service kiosk has proven to be of great use to both customers and businesses the entire world over.

Nowadays, we are more than accustomed to the idea of seeing the odd self-service kiosk here and there, and we use them more and more every day. Whether we're paying a cheque into our account at the bank, or we're browsing through the many goods available in Argos, we're certainly not averse to using the kiosk!

Sadly, for every development that sees queue length at the airport dwindle, we have a more unusual invention which doesn't quite take offâ€¦ Here are some of the less innovative ones.

Pennsylvania is not a dry state as such, but it does have some of the stricter alcohol laws in the US. So if you were to introduce a self-service kiosk that dispenses wine, the so-called "Quaker State" (hint, hint) probably wouldn't be your first choice of implementation destinations.

Believe it or not, they were introduced, and customers had to scan a form of photo identification, breathe into a breathalyser, and even look into a video camera so that someone could verify their identity before making a purchase! Unsurprisingly, they didn't last too longâ€¦

Yes, somewhere in the world deemed it appropriate to install kiosks dispensing a controlled substance. The most surprising fact about the whole thing, however, is that it wasn't Amsterdam!

Nope, it was Los Angeles that started selling weed to all and sundry. Sadly for those with a penchant for pot, the UN's International Narcotics Control Board quickly shut down the operation, deeming it entirely illegal.

A far cry from the traditionally retail-based kiosks offered by companies such as Evoke, the rather hilariously named Roboputt machine is a kiosk that can offer golf lessons! Yep, an on board computer will help you practice your swing, giving you the best tips from the pros to get you ready for the green.

You can even bring along your own clubs, saving the data so that you can continue your lessons at some of the other Roboputts around the world!

Now a self-service kiosk inside a grocery store would not necessarily be an unusual thing on its own. Actually, they can be quite useful; if we look to the supermarkets like Asda and Tesco as an example, we can see that they are often wildly successful ideas, cutting down queue times immensely (if not exactly reducing stressâ€¦).

No, the grocery stores in the state of Colorado are unique. Instead of simply acting as check-out counters, they have a wide variety of functions to do with local schools. Shopping parents can look up their child's grades and attendance, as well as how much they're spending on lunch and whether or not they have any homework due, and even schedule face to face meetings with the teachers - all while stocking up on carrots!