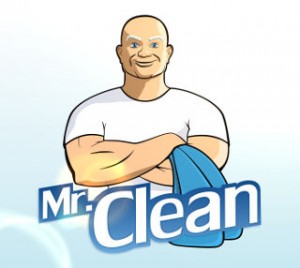 Do you know a person, who doesn’t know about Mr. Clean? Probably not. Who won’t remember the bald guy with the white shirt and earring? Since 1958 (the first TV appearance of Mr. Clean) this character became very popular and the most selling cleaning product on the market. It’s not like the cleaner is magical or something, but somehow Mr. Clean managed to find his place in the hearths of many people around the world and become a must for every household. But how did this magic happen? What is the story behind this mysterious character? Is it a jinn, a person or just someone’s imagination at play?

Known by many different names in different continents, Mr. Clean (also called Mr. Proper, Don Limpio, Mastro Lindo, Monsieur Net, Romuald Diego, Flash in UK and many more around the world) was just an idea in the head of Linwood Burton. He was a marine businessman in the mid 20th century, who saw the need to clean a ship without paying large premiums. Burton had accounts in ship cleaning on the east coast of the US and created the cleaning product, which was later sold to Procter & Gamble.

One thing is for sure when we talk about Mr. Clean, the first actor who ever tried to act as the bald cleaner is House Peters, Jr. He managed to give a humane look to the fictional character and drive the popularity of this Mr. Clean even further. Anyway all the TV adverts were produced, written and directed Thomas Scott Cadden. Who was the person behind the curtain. The original music and words are also his work, so we can call him the father or creator of Mr. Clean. 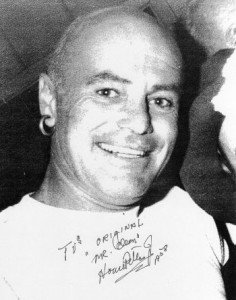 When it comes to the question, which many people asked over the years or namely-who is Mr. Clean. To some he is a mystical creature with magical power-a jinn. It’s one of the many theories passed from mouth to mouth and eventually become a legend. But why a jinn? Maybe because his magical appearance in all the commercials when Mr. Clean manages to clean everything instantly. His look is also a reason for some to imagine him as a jinn-the folded arms and earring are all the attributes of the mythical creature.

However, the advertising agency behind the famous character decided to reveal the mysterious origin of Mr. Clean and presented an ad associated with this long asked question. Here you can check the video and see for yourself. Anyway, it will be unlikely for the millions of customers to just forget about the magical Mr. Clean from the old times and adopt this new 3D character.

The story of Mr. Clean proves once more how a simple ad, an idea and a character can become almost part of the folklore for generations. I bet that even in a hundred years from now this mystical cleaner will still exist or be remembered by many.

This article came to you with the help of Mr. Clean‘s brand associated employees and Gutters London-cleaning services company in London and the area.