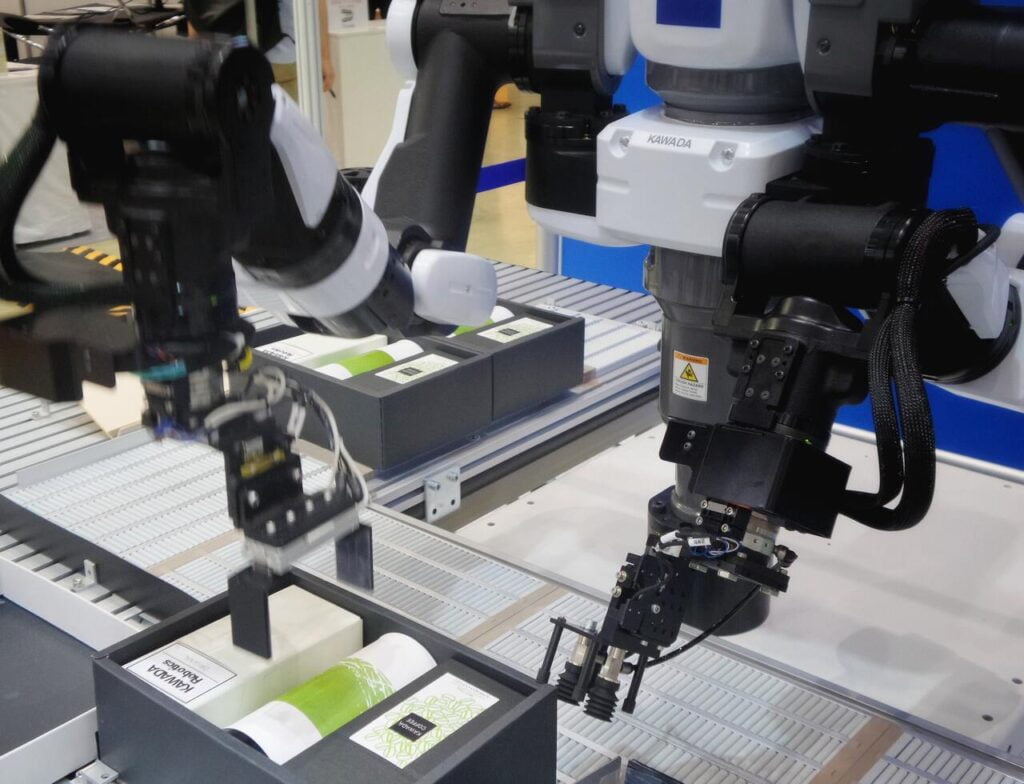 Industrial robots have been in the workplace for decades. However, innovation tends to grow at an exponential rate and robots are being introduced into an increasingly wide spectrum of sectors. From healthcare to hospitality, it’s all the more common for humans to work alongside mobile robots, like Robotnik’s diverse and versatile fleet.

This is an important point too because safety is mostly only a concern when humans are involved. Whilst popular culture would have us believe that we are going to be taken over by robots, the reality is that 1we will be working alongside them. And this changes the landscape of safety within the workplace.

For example, working behind a bar was once a matter of knowing where the fire exit is and how to lift a barrel of alcohol safely and effectively. In the not too distant future, there will be an entirely new set of workplace safety threats involved from the mobility, weight, and electricity of workplace robots.

The biggest change to health and safety is likely going to be the benefit of having robots around. Robots, being disregarded for their safety, can undertake higher-risk tasks that would otherwise be a threat to humans, as for example the use of robotics to clean the rooms of patients suffering from Ebola.

In the example of hospitality, moving barrels around and pallets of products can be risky for humans – many of whom may not regularly exercise or lift weights. Having robots that can undertake these tasks will significantly reduce the amount of time and money spent on health and safety too, as there may only need to be one worker who could replace the robot’s activities should there be a fault – as opposed to an entire workforce that has to routinely lift such heavy items.

Of course, there may be some introductions of health and safety training too, regarding operating around the robot itself, but the risk of injury is likely lower overall.

The risks for humans posed by the robots heavily depend on the robots in question. For Robotnik, an experienced robot manufacturer since 2002 within the collaborative mobile robotics market, this aspect is especially important as humans and robots will be working side by side. Whilst some are very powerful and heavy machinery, others are simply self-driving small devices.

New measures are being introduced in some industries to help mitigate the risks of robot-human interaction, such as using cages and guards to demarcate the areas in which they separately work.

There has been research conducted that has shown a large proportion of robotics-related accidents do not happen during normal operating hours. Instead, they happen during moments of adjustments, programming, or maintenance. This issue, now identified, is likely going to be a focus of safety practice consideration.

One of the biggest risks posed by our interaction with robots is when they become faulty. Not just because this may be a time where they perform functions in ways we do not expect, but because workers may feel the obligation to mend and fix the robots in order to save time. Of course, there are many electrical risks to anyone who is not an expert, and it isn’t viable to have all of the workforce trained in fixing robots. However, it’s possible that situations arise in which fixing or taming the robot seems like a safer alternative to its malfunctioning.

What poses the greatest risk of all is the lack of regulation. Whilst technology rapidly evolves, the law trails behind. The most unregulated industries are the ones that are spearheaded by new evolving tech – like crypto – and the same goes for workplace robotics. Of course, this has health and safety ramifications, because workplaces aren’t bound by law to take full precautionary measures in some instances.

Building Safety into the Robots

Of course, it’s not just humans that will have to undergo safety training. Whilst it isn’t ongoing like humans, robots are programmed to detect safety threats. For example, speed limits are placed on the robots, along with sensors that can detect human activity.

The issue with relying on robotic programs to ensure safety is that the technology is still new, so there needs to be backup measures for humans too (i.e. an emergency off button that is easily accessible). However, over time, the statistics will speak for themself in how robotics are helping workplace safety more than they pose a unique threat. As a result, more and more investment will be introduced into establishing the AI and programming behind them. Following the Robotnik example, they secure its automated mobile robotsthrough the accomplishment of the EN ISO 3691-4:2020 (Industrial trucks — Safety requirements and verification — Part 4: Driverless industrial trucks and their systems) that defines the minimum requirement for safety in the robotic field.

Ultimately, it will also be a matter of gaining co-workers’ trust. In the long run, this will not be an issue because the productivity and presumed safety will speak for themselves. However, in the short-run robotics can be met with skepticism, be it safety concerns or job security.

However, the job security threat is a driving factor in co-workers’ desires to co-operate, ultimately, because it’s better to work alongside robots as opposed to be replaced by entirely. Cooperating could result in synergy, in which the diverse set of advantages each one has over each other flourish, which each mitigates the other’s weakness.