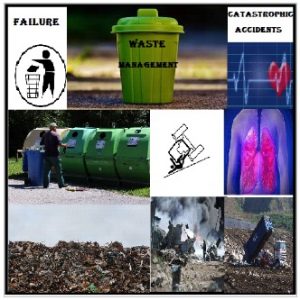 For instance, in the UK much waste is disposed of in landfill areas but not all the waste rots away. Some waste materials produce harmful chemicals that contaminate the environment. These contaminants as a result pose a threat to animal and plant life. Consequently, human beings who come into contact with these plants and animals get hurt. Contaminated soil is hard to clean and needs to be dug up to solve the problem. You can dispose hazardous items in skip bags for effective waste management.

Chemicals contaminate the soil and when it rains they contaminate the water bodies like rivers which drain into lakes or oceans. The levels of the chemicals in the water contaminate aquatic life. Farmers who use rives to water their crops and domestic animals will end up contaminating them. As a result, human beings that feed on this contaminated food will end up getting sick from certain types of cancers. This is not good.

Disposed waste can cause air pollution due to evaporating chemicals and gases. Mostly, this happens in open-air dump sites where we dispose of our electronic trash and other garbage. This also happens via incinerators in garbage sites and can be very devastating even causing acid rain. Some disposed of garbage produces highly flammable methane gas, a greenhouse gas that causes global warming.

In modern-day, waste disposal has been done carelessly and this is a matter of concern. Our failure is in laying down policies that will help in reversing the effects of climate change. For example, the garbage that is dumped in landfills emits methane gas. Open landfills represented 91% of methane gas produced by all landfills. High and dangerous levels of carbon dioxide are produced by openly burning trash in certain parts of the globe. Carbon dioxide is a greenhouse gas that raises temperature levels in the atmosphere causing the greenhouse effect. Carbon dioxide causes serious health concerns to residents who live close to these dumping sites.

Our inaction to these irregularities poses a threat to human health. More trash is being produced and improperly disposed of. As a result, it affects our environment in many unimaginable ways. There are long term effects which will be very expensive to reverse. Diseases have been reported such as cancer, asthma, COPD, low birth weight, cardiovascular disease, infectious diseases, and many more. Insects, bacteria, and vermin are also other additional problems that trash causes.

We have different ecosystems around the world. The consequence of pollution manifests itself in waterways and marine life. It affects people who depend on marine life for their survival. They cannot differentiate between what is food and not. They feed on trash since the aquatic animal could not digest it leading to serious health consequences and sometimes death. Scientists have found plastic fragments in most aquatic species. As a result, this leads to death since most aquatic animals do not have enough acid in their digestive system to breakdown the ingested object.

Most of the things that we use are made up of chemicals. These chemicals do not disappear when these items are dumped. They continue to remain and cause damage to the environment for a very long time.  Environmentally sustainable rubbish clearance is one great thing we can do for our planet.

A post by  Clearabee – a rubbish removal London company that operates in the UK. Our head office is in Birmingham. We offer skip bag, man and van, sofa removal and skip hire services across Bristol, London, Leeds, and other parts of the UK. We offer services to brands like Homeserve, Sofology, Wren Kitchens, DFS, and many more. Clearabee has been ranked as the fastest-growing rubbish removal London service provider in Europe for 3 years consecutively.