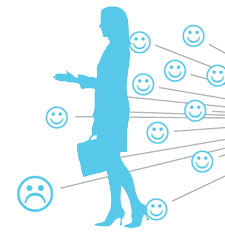 A good reputation is essential to the survival of your business, and it can have a direct effect on your company’s bottom line. Not only does it affect your ability to get customers, it can also prevent you from keeping the ones you have. Unfortunately, reputations are also delicate things that are easy to tarnish and even destroy. And once your reputation is damaged, it can be a long road to redemption. In an age when the internet one of the biggest ways that consumers get their information, consumer reviews can be one of the biggest helps or hindrances to your reputation.

The Importance of Customer Reviews

In a survey conducted by Dimensional Research in 2013, 90 percent of customers said that their buying decisions were influenced by online reviews. The fact is that customers read reviews and, thanks to the internet, those reviews are everywhere.

There are sites like Yelp and Angie's list that are devoted to customer reviews of every imaginable goods and service. There are also specialty sites that review a certain industry, like doctor review sites. All of these sites are designed to protect the consumer by directing them toward the good and warning them away from the bad.

Because people rely so much on customer reviews and feedback, having no reviews at all can often be just as bad as having bad reviews.

The Sordid Side of Customer Reviews

Because customer reviews have become so popular and so important in building or destroying a company's reputation, they have also created some serious issues.

First, because reviews have so much power, customers and even business competitors have resorted to using them to conduct smear campaigns. There have been reports Yelp users threatening restaurants with bad reviews if they don't meet certain demands. There have also been reports of Yelp sales reps demanding money from business owners, in exchange for keeping positive reviews at the top of the page. Business owners that have refused have actually seen positive reviews disappear, and negative reviews shoot to the tops of their pages.

There has also been a problem with businesses, and individuals, generating fake positive reviews to boost their sales and visibility. In 2012 Forbes broke a story about fake reviews at Amazon. Writers were either creating multiple accounts, called sock puppets, to leave high-rated reviews on their own work; or they paying other people to do it for them.

However, Amazon is not the only place where these fake reviews occur, and writers aren't the only ones making them.

One solution might be to create your own review site, similar to the Lexingtonlaw.com review site, where you pull reviews from other sources around the internet, and also let your customers leave feedback.

Having your own sites means that you have some control over how many negative reviews are seen. Also, you can set up the site so that it appears high on internet search results. That way, someone searching for reviews of your company will see your site before they see sites like Yelp or Amazon.

Even though your own site will let you control your image, you still need to be transparent. Having a lot of negative reviews looks bad, but so does not having any negative reviews at all. Every company makes mistakes, and there will always be customers who complain. A company that has too little negative feedback sounds like it’s too good to be true, and is just as likely to lose customer trust as one with too much.

It doesn't matter how good your reviews are if reality says something different.

Not all bad reviews are false reports generated for revenge, some might have some merit. If you're getting a lot of bad reviews, it could be time to take a long hard look at how you're conducting your business.

You might find that customers think your product is good, but they hate your packaging and shipping process. Or, they love your customer service, but have serious issues with the consistency and quality of your product.

Refusing to address issues that come up in negative reviews will hurt you just as much as the reviews themselves. For example, if a customer comes to you based on a your positive reviews and has an experience opposite to what was promised, that customer is not likely to give you a second chance.

Also, that customer might not report his experience to a review site, especially if he thinks you are ignoring or deleting bad reviews. Instead he might just tell his friends directly; and then, like the old shampoo commercial, those friends will tell two other friends, and so on, until you start losing business despite having excellent reviews.