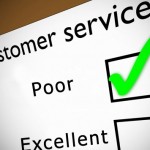 In today's modern, time-sensitive and technology-driven age, customer service is a thing becoming rapidly associated with the past, as consumers find it more and more difficult to find a service they are 100% happy with. Of course, we all know that accidents happen from time to time, and mistakes are made too, but efficient customer service should be about rectifying those mistakes; making consumers feel valued, and taking appropriate steps to ensure that such mishaps do not happen again. However, poor customer service seems to have taken over, to the point where it has become a disappointing norm. Below are five companies regarded as having the worst customer service departments known to UK consumers in current times. Ryanair Ryanair's pitiful attempts at a coordinated, effective customer service practice are not at all secret, with the Irish-based airline being named â€˜Worst Brand' in a Which? Customer Service research survey. This mostly comes down to its staff's rude, dismissive and unpleasant manner, which one customer who participated in the survey described as making one feel "more like a nuisance than a customer". However, other regular complaints include highly disproportional charges for hand luggage weighing a fraction over the limit, a lack of response to customer complaints, and the unexpected cancellation of flights. A woman charged 300 euros for the re-print of five boarding passes even though her party was already checked-in online was met with an unapologetic comment from the company's Central Executive Michael O'Leary, naming passengers who fail to print their boarding passes as "idiots".

The company have recently announced their public pledge to "be nicer" to customers, with O'Leary making customer service a priority. Interestingly, the new turn comes shortly after a fall in sales and company profit earlier this year.

HM Revenue & Customs was in the news spotlight earlier this year for its poor customer service record-namely its overly-confusing and complex phone helpline system. Regarded as having the worst customer service line in the â€˜Phone Rage Index', a database compiled by helpline assistance website, PleasePress1, its helpline springs up approximately 400 menu options across its six services, costing callers a total of Â£136 million in phone bills, it was revealed last year. According to TelecomTV, HMRC has long been criticised as one of the most user-unfriendly organisations, and it ranked in the top 3 companies for worst customer service in a poll by the Daily Mail.

T-Mobile is one of the most complained-about networks according to CNET UK's tech blog, Crave. A latest report by Ofcom showed that the network drove the most complaints their way in the last three months of 2012, which stemmed largely from billing issues and the network's poor practice in handling complaints appropriately. In a recent LoveMoney survey, which compared the performance and customer services of several major UK mobile networks-Mobile came joint-bottom with a rating of just 3 out of 5 for customer service and a score of 56% overall.

Customer complaints towards BT Vision have been so commonplace that it eventually gave BBC One reason to examine the service in an episode of its popular consumer-police show, Watchdog. According to CNET UK, BT Vision prompted more complaints than any other television service - six times greater than average. Watchdog found that the most popular customer complaints were that the service was not as easy to access as was described to them before signing up; the long wait-times on the BT Vision customer service helpline; failing to test whether a customer's broadband can support the service before installation, and a cancellation fee as high as Â£200 in some cases for dissatisfied customers wanting out.

Multi-faceted giant Tesco ranked bottom in a table of nine major supermarkets in an annual consumer survey by Which? that compiled feedback from 11,000 consumers. Executive Director of Which? Richard Lloyd put this down to misleading pricings and promotions, saying that supermarkets need to make things easier for customers shopping on a tight budget instead of confusing them with numbers and percentages. Customers trust supermarkets to price food fairly, as well as expecting staff knowledge, co-operation and helpfulness. Other customer complaints about Tesco involve product availability, store layout and the number of staff that available when needed.

A common problem with many large companies (particularly those that outsource to various locations) is that customers are simply unable to contact a Customer Service department in the first place. Indeed, this can involve long wait-times or convoluted phone menus, but very often customers complain that they are unable to find a contact number for the company, whilst the website's FAQ section and online contact form provide little help and return a slow or sometimes no response. Active, purposeful customer service contact numbers are therefore crucial for companies if they wish to deliver a consumer experience that customers will be happy to use and recommend.