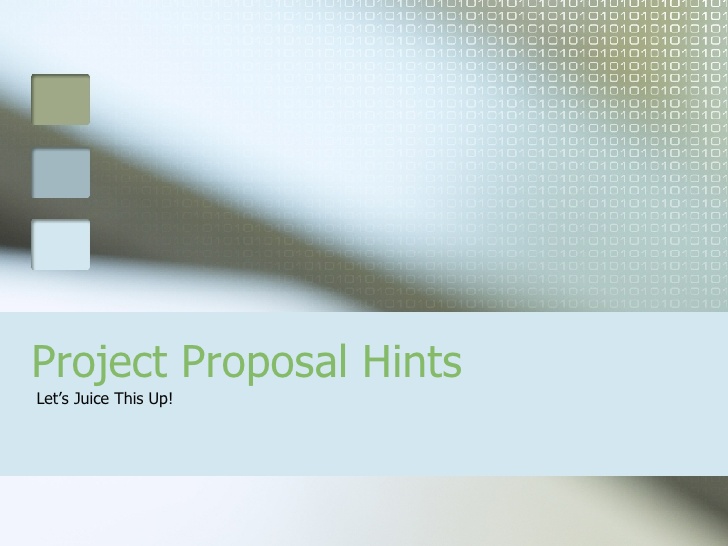 Less detailed than a formal feasibility study or analysis, the project proposal is intended to raise awareness that a project may be appropriate and viable. It can be used at almost any level of the organization and is usually drafted by a team member or senior executive. At a minimum, it provides a general description of what the project is supposed to accomplish and how or when it could be implemented. At the extreme, it may describe not only the project deliverables, but the approach, the resources to be applied, and the alternative approaches that could be used for implementation. It is used to present ideas to anyone responsible for project selection and to initiate the selection process.

The project proposal defends a particular perspective or approach to solving a problem or creating a solution. Some of the items, as noted in the following list, may be considered "optional" content for the project proposal. However, they will ultimately have to be included in some project analysis before a final go/no-go determination is made.

â€¢ Name of the project. This should be descriptive, rather than creative.

â€¢ Project description and justification. Provide a general description of the project, including the impetus for implementation.

â€¢ Recommended manager/resources. List any specific resources or resource skill sets required for project success, as well as the rationale for their selection.

â€¢ Project budget/schedule (optional). As appropriate and available, this information, if included, should be provided with a relative range of accuracy to denote the confidence level in the numbers provided.

Here is a n example of project proposal form.

The project proposal is most commonly an internal document. But because it proposes a change to current business or operating practices, it may be considered a politically volatile document. In developing the project proposal, the more and higher the levels of sponsorship and support, the more likely it is to be received favorably.

Considering the components of a project proposal, the video below aims to offer you more info on how to actually write a winning proposal.[youtube https://www.youtube.com/watch?v=XFhLHBLMKi0]