The possession of cannabis (including hemp) has been outlawed since the Marihuana Tax Act of 1937. Since then, cannabis has been considered a dangerous class of drugs. But now that President Donald Trump signed the farm bill, hemp has been taken off the Controlled Substances Act and is now a legal substance. This will lead to a lot more transparency in a market that was previously difficult to understand, and it is great news for pharmaceutical companies that use hemp extracts.

But in order to understand the impact of the farm bill, we need to understand the difference between hemp and marijuana. It’s quite simple: hemp is a variety of cannabis that doesn’t have psychoactive compounds. It doesn’t make you feel the high commonly associated with smoking weed, for example. Hemp is a cannabis plant that has less than 0.3% of tetrahydrocannabinol (THC), which is the psychoactive compound in cannabis that you can buy online through sites like honesthemp.co.uk.

Hemp has a wide variety of use cases. It can be used in textiles, plastics, livestock feed, and home cooking. It’s hard to conceptualize, but hemp can even be used in cars. Of course, the biggest sector to benefit from the legalization of hemp is likely to be the healthcare industry.

However, this doesn’t mean that hemp-derived CBD products now have a free play. The Food and Drug Administration still considers CBD a drug ingredient and requires companies to ask for their approval before selling it in food or health products. A new American healthcare brand called CBDMEDIC is the first family of topical medications that combines advanced technology, CBD hemp extract Cannabis sativa L (THC-free and non-psychoactive) alongside natural and organic ingredients such as camphor and menthol. All CBDMEDIC products are FDA-registered, 100% federally legal, 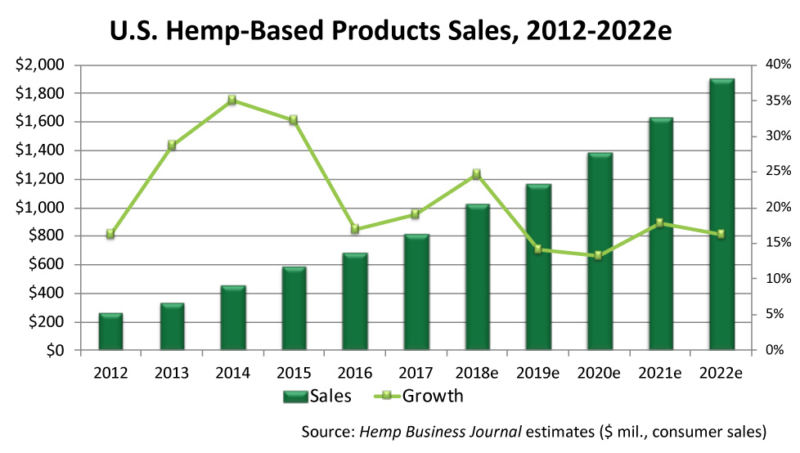 Over the Counter products that provide strong and long-lasting pain relief.   The Menthol and camphor are the active pain-relief ingredients in their products, no medical claims are attributed to the CBD. They are safe to market as any other topical pain relief product already sold on retailers’ shelves.

Although a further research is needed to confirm how CBD products benefits with our health, there are plenty of hints that the cannabis compound can be used to treat a wide variety of illnesses.

Additionally, hemp is good for farmers because it’s easier to grow than cotton, corn, and soybeans. It requires much less water and it’s okay with poor soil. It grows in tight packs and so crowds out weeds. But because you need a special license to grow it, the United States has not been growing much hemp. In fact, U.S. farmers only grew 25,000 acres of hemp in 2017. As such, the U.S. imports a significant amount of hemp from China, which produces 50% of the world’s cannabis supply.

Although there are still some hurdles for the CBD industry to overcome, the farm bill is a significant step towards full legalization of hemp and hemp-derived CBD products, and companies have started to take notice. Legal marijuana was estimated at $9.7 billion in revenue in 2017, and that’s without the state of California. Marijuana sales are estimated at $75 billion in revenue by 2030, and it could eventually become bigger than soda sales.

So hemp is profitable and sustainable, and could provide a significant boost for U.S. farmers. This is much need, considering the ongoing trade wars between China and the U.S. have not been easy on farmers. It could also mean that the U.S. will export some of its hemp to Canada, where the policies on marijuana in general are much looser (Canada legalized recreational marijuana in 2018).

Politicians across the political spectrum now understand that marijuana is not the same as hemp, and being pro-hemp is not the same as being pro-marijuana. The non-psychoactive nature of hemp makes the compound easier to endorse, and the Farm Bill will open the way to more research into hemp. It will give farmers more breathing room, and it might mark the U.S. as a larger player on the map for hemp-derived CBD products. It’s a big industry, and ordinary people might see some form of cannabis start to appear in many different areas of their lives.