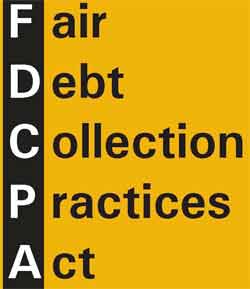 In a perfect world everybody would play by the rules. There would be no room in this perfect world for liars, bullies, and people who resort to threats. Unfortunately for a number of people employed by debt collectors, this means there would be no place for them either. In no way should would we want you to believe all debt collectors go about their business in an unprofessional manner. However, for anyone who has dealt with a few are likely to have come across those at least one who could be described as such. Their actions do not stop at unprofessional, many times these actions are illegal. Thanks to the FDCPA, consumers have protections against harsh treatment from debt collectors. The question is, when exactly does a collectors actions cross the line from unprofessional to illegal. The following are some of the more common examples and how you can combat them.

The first pair of examples we will discuss are two you may be familiar with but should not be overlooked. A debt collector can not contact a debtor outside the hours of 8am and 9pm in the consumers residential time zone. In addition to this, they are not allowed to continuously ring your phone for the purpose of annoying you. In both instances this is considered harassment which is punishable by the FDCPA. Since the advent of cell phones that time stamp each call and voice-mail, you would think these offenses are easily stamped out. However, both still occur far too often considering the technology consumers have at their fingertips.

While the first couple violations deal with the time of day and frequency of calls, the next few common offenses are downright offensive to anyone with a moral compass. A debt collector may not use abusive, obscene, or profane language when speaking to a potential debtor. In addition to offensive language, they also are not allowed to threaten to use violence when pursuing a debt. If you are met with this kind of hostility, it isn't to be tolerated and the FDCPA takes these matters seriously. While we have addressed bullies and collectors who will resort to threats, we've yet to touch on the liars. Not to be forgotten, this group of collectors have regulations in place just for them. You may come across a collector who either fails to disclose they are a representative of a debt collection agency. Some even take dishonesty to another level by claiming to be an attorney or law enforcement personnel and threaten to sue or arrest you if the debt isn't paid. Of course these actions are highly illegal and it is recommended that you record all conversation that takes place between you and the debt collector. Doing so could mean the difference in getting the harassment to cease.

On the subject of ceasing action, some debt collection agencies commonly fail to cease communication when the FDCPA requires them too. The easiest way to get the phone calls or notices in the mail to halt is to seek representation from an attorney. Preferably one who has experience dealing with such matters involving the FDCPA. Once you have made it clear that you are being represented by an attorney the agency is forbidden from contacting you regarding the debt unless your attorney fails to respond in a reasonable amount of time. You may feel fighting a collector on your own makes sense. Certainly some of the defenses outlined in this article can help in that fight. However, if you're intent on keeping debt collectors at bay, finding solid representation to fight on your behalf is a great first step.


Published on behalf of Brian Levesque. He is a business professional, currently employed by the Law Office of Scott D. Owens, one of Florida’s most recognized debt collection, FDCPA, TCPA, and consumer attorneys.