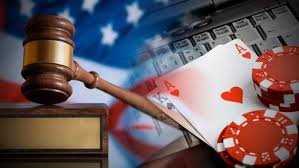 Online gamblers had fun days at the office until legislators chose to ban their favorite games nationwide. While Internet gambling is still illegal in the US, three states have passed laws that allow their residents to play and other states contemplate the possibility of following suit. Small steps are being made in the right direction all over the country, with Pennsylvania and California being the most likely to join Delaware, Nevada and New Jersey.

Online casinos and poker rooms are paying attention to what happens in the United States and wait for the opportunity to tap into the immense potential of this lucrative market. The Bad Actor Clause could delay the entrance of some of the big players, who were found at fault for continuing to offer their services after gambling was declared illegal nationwide.

The impact of the presidential race

It’s a bit ironic that Hillary Clinton is credited with the first chance to win the elections by the same bookmakers and online casinos that some Republican candidates try to keep away from US borders. At the same time, there is no consensus among GOP candidates in regard to online gambling, with front-runner Donald Trump once again having his own views.

Meanwhile, two GOP 2016 presidential candidates reintroduced the Restoration of America’s Wire Act, with Lindsay Graham and Marco Rubio enjoying the support of Sheldon Adelson. The casino magnate has his private interests in the banning of online gambling and has been spending millions in seeing this bill go through. He runs a very lucrative chain of land-based casinos that could be threatened by their Internet counterparts, so his reasons are selfish and he only tries to cull the competition.

Donald Trump supports the legalization of online gambling and he doesn’t hesitate to speak his mind, consistent with his motto “go big or go home”. He couldn’t care less about what Sheldon Adelson wants and since he doesn’t need his money, he is one of the few who can say whatever he likes. For those who hope to see online casino and poker games restored, the fact that he leads the polls is encouraging.

The near future looks bright

The bill supposed to enforce a blanket ban on all types of online gambling failed miserably, but the initiators plan to bring it back on the tables in 2016. Apparently they don’t have the support in Congress and it is very likely that this initiative will fail once again despite their perseverance. Delaware, New Jersey and Nevada are already attracting a lot of money to state coffers, something that didn’t go unnoticed nationwide. Other money-strapped cash like the idea of bolstering their revenues in this way.

A recent GC report highlights the fact that gaming revenue increased by more than 90% in New Jersey, with casino games leading the way. Poker didn’t fare so well in the Garden State but this could all change if major poker rooms are allowed to enter a regulated market. Players in Delaware and New Jersey are also signing up in greater numbers for online gambling products and there is the possibility of introducing interstate compacts.

A major victory for online gambling fans would be the joining of Pennsylvania and California. The latter only plans to regulate online poker, but given the huge population and GDP of the state, this would represent a huge success. Pennsylvania seems to be more flexible and apparently it wouldn’t hesitate to regulate all types of games, therefore opening more opportunities to iGaming market operators.

The enthusiasm of those who hope to see online gambling restored is only surpassed by the passion of those who want to see it destroyed. The Restoration of America’s Wire Act failed miserably in 2015 but the fact that the issue has returned in 2016 speaks volumes about the perseverance of initiators. Luckily for those who are scared by RAWA, the goals of this federal bill are so ambitious that the odds of seeing it signed into law are slim to none.

What usually happens is that Internet gambling is only seriously considered in the second half of the year, during the second session of Congress. With the specter of US elections looming, legislators have other priorities and the biased landscape doesn’t help either. Democrats and Republicans have a hard time passing controversial laws and this is one issue that is unlikely for them to agree on anytime soon. The fact that there is dissension even within the parties also reduces its chances to succeed in 2016.

The worst-case scenario is not only the passing of RAWA but the failure of more states passing online gambling legislation. New Jersey, Delaware and Nevada lead by example and numbers speak for themselves, while providing other states with the impetus to pass similar laws. Unfortunately, except for California, the US Virgin Islands and Pennsylvania, there are no other states likely to jump on the bandwagon by the end of 2016.

California is the state that spends more time in the spotlight, even though only online poker is likely to be legalized. This would represent a small victory for the iGaming market, while meaning a great deal for the tens of thousands of professional poker players. US Virgin Islands and Pennsylvania would have a smaller impact, but with each state that passes favorable laws, the odds of others following suit improve.

Online lotteries to become legal in 2016

The last year was truly spectacular for Powerball and Mega Millions players, with record jackpots being won in the final months. There are already operators selling tickets worldwide, so players from other countries can buy tickets and win hundreds of millions of dollars.

Purchasing tickets online is convenient, inexpensive and will result in even bigger jackpots. 12 states have already made the necessary adjustments to their legislation to allow tickets to be sold over the Internet and many more are expected to follow their example in 2016 and beyond.