Carbon fibre is mostly based on a tar like petrol based pitch, or a plastic commonly used for clothing textiles called polyacrylonitrile. It has an ability to withstand high temperatures and its molecular structure is much like graphite; very stable, giving it a high melting point and making it less likely to react chemically with other substances. As a result, it is useful for components that may be subjected to heat and for applications that require resistance to corrosion. 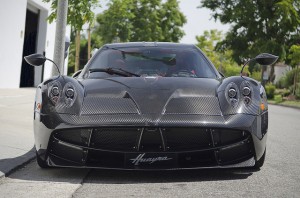 Every day new uses for carbon fibre are ingeniously implemented. For example, by using carbon fibre fabric and epoxies, bridges can be repaired and last much longer without having to be torn down and rebuilt at a high cost. Carbon fibre nanotubes can be added to existing product designs to enhance their strength and make them last longer.

Whereas with other products, carbon fibre can greatly increase their cost (bicycles for example). Due to this additional cost, the implementation of carbon fibre in general consumer products is often only for specialized purposes.

This strong material is incredibly versatile and has many uses, and we've listed several more of them below to give you a better understanding of carbon fibre's diverse applications.

Carbon fibre is incredibly light weight which allows it to be used in all kinds of sports equipment from hockey sticks to bicycles, where strength is of paramount importance.

Other sporting instruments where carbon fibre is used include:

The light weight attribute of carbon fibre also has the ability to mimic the effectiveness a birds' wings when it comes to flight. Carbon fibre fabric is wrapped and moulded to the wings of airplanes to provide additional tensile strength, while remaining light enough to keep the plane in the air.

The top 3 carbon fibre fabric consumers are the military (for just about any country, but the USA is the one we're thinking about right now), the Airbus company, and lastly, Boeing.

In fact, the 787 Boeing Dreamliner is 50% carbon fibre. It's light weight and absolute strength allows it to get this giant air plane from England to Australia without a single refuelling or layover.

High performance marine equipment and vessels where speed and velocity are important rely on carbon fibre fabric and epoxies to ensure maximum speed and strength while ripping over the water.

Other marine uses include:

Carbon fibre fabric's relative inertness also makes it great for applications in the chemical and medical industries. Carbon fibre can be used in body implants and prosthetics.

For the same reasons as mentioned above for marine equipment, airplanes, and athletic equipment; carbon fibre is great for cars, buses, and trucks.

These are just a mere few examples of the versatility of carbon fibre, carbon fibre fabric, and its other formats. Demand continues to rise for carbon fibre and so does its costs, as a result. This is largely due to the airline industry monopolizing its supply for large air ships.

Carbon fibre is typically used in high end products, however should it ever get lower in cost, it could be ubiquitously used in every kind of car and consumer product ranging from cell phones to counter tops.

Alicia May is author at LeraBlog. The author's views are entirely their own and may not reflect the views and opinions of LeraBlog staff.